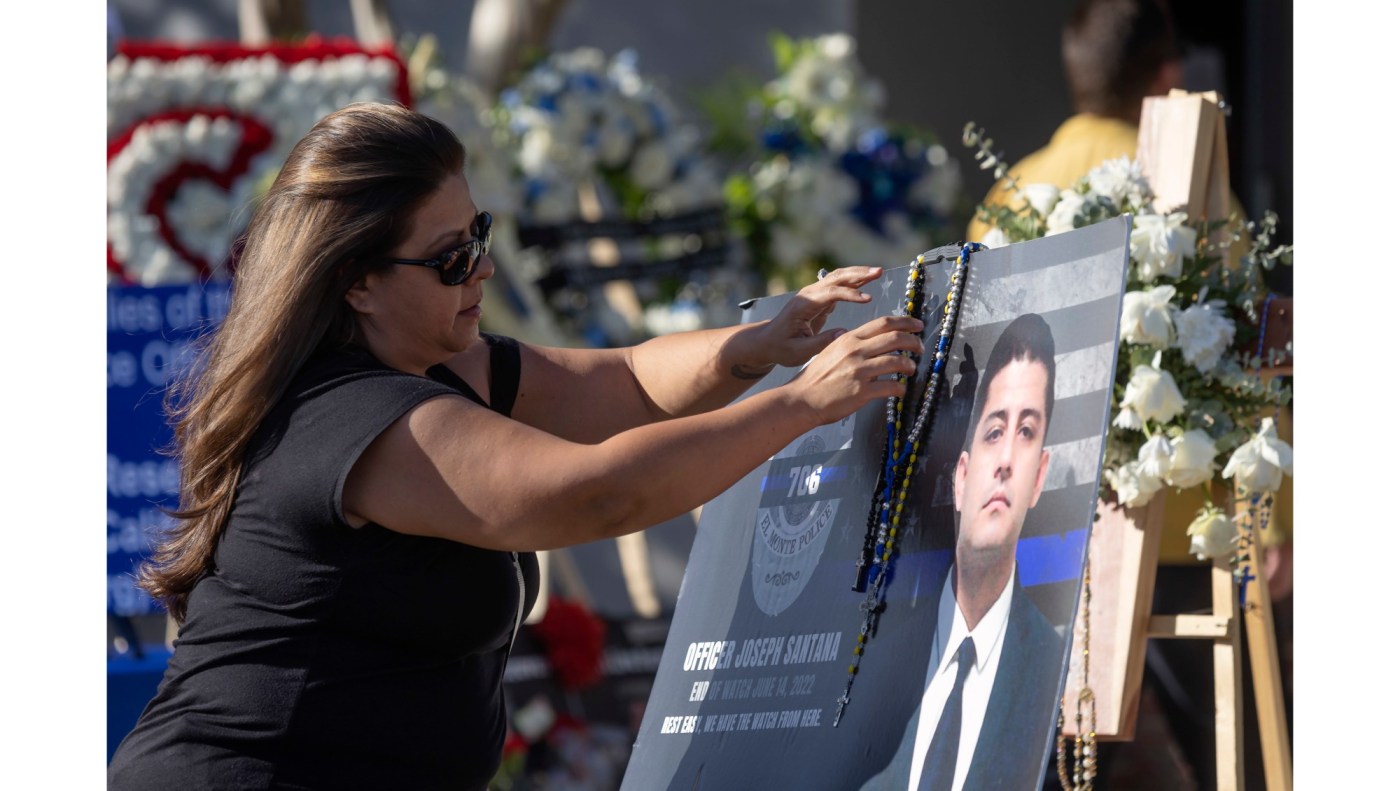 Hundreds of San Gabriel Valley residents joined Saturday evening with public servants to unite at a vigil with family members of two slain El Monte police officers, who were remembered for their bravery and commitment to the community.

At the vigil of the two fallen El Monte officers where HUNDREDS of public servants, residents and loved ones of the fallen officers are paying respect.

I’ve managed to get in front of the scrum but attendance is so large you can’t hear a thing in the back.
Still, people mourn. pic.twitter.com/ZXkIxowfQv

The sudden, violent loss of the two respected officers, Cpl. Michael Domingo Paredes, 42, and Officer Joseph Anthony Santana, 31 — both killed when they encountered a gunman inside the Siesta Inn on Garvey Avenue on Tuesday, June 14 — has shaken the overwhelmingly Latino community in the heart of the San Gabriel Valley.

“They pursued their dreams and they did it with you — the family and the community,” said Los Angeles County Supervisor Hilda Solis, speaking in Spanish and English. “The community is standing with you.”

The pair of beloved officers were responding to a call about a possible stabbing just before 5 p.m. the day they died, officials said. They immediately came under gunfire and were taken to LAC + USC Medical Center, where they died. The suspect they encountered, Justin Flores, 35, also died in the shootout

Both officers, raised in El Monte, had a strong connection to the community, according to  mourners who added to a collection of flowers and messages of thanks at the police station this week.

Paredes had served as a full-time officer with the department since July 2000, working several specialized assignments before achieving the rank of corporal, officials said. He started his law enforcement career as a cadet with El Monte police.

Santana initially joined the San Bernardino County Sheriff’s Department in September 2018 and worked at  the West Valley Detention Center in Rancho Cucamonga, Sgt. M. Higgins, a SBCSD spokeswoman said. He was hired by the El Monte Police Department in 2021. He also previously worked with the city as a part-time public works employee prior to his law enforcement career.

He leaves behind his wife, a daughter and two twin boys.

Paredes also leaves behind his wife, a daughter and a son.

Olga Garcia, the mother of Santana, earlier this week described him as a reserved person who shared his relentless, cutting sense of dry humor with those he was close with. He liked to play basketball, was generous with his time when off-duty and always eager to help a friend in need.

While growing up, Santana looked up to his stepfather, who was also an El Monte police officer, his mother said. That relationship inspired him to pursue a career in law enforcement.

Like Santana, Paredes was also compelled to give back to the city that raised him, his uncle, Tony Paredes, said. He said that, as a child, the El Monte officer was kind,  attentive and respected his elders.

He recalled when his nephew approached him about joining the police academy in the late ’90s and asked him to write a letter recommending the then-aspiring officer to the department.

El Monte Mayor Jessica Ancona was teary earlier this week, as were many others throughout town, as she explained how the sudden, violent deaths of the city’s sons has left her community reeling.

“Heartbroken doesn’t begin to express the loss that we feel,” Ancona said Tuesday night. She noted both officers were “essentially ambushed while trying to keep a family safe.”

On Saturday night, Ancona said: “It’s unfortunate it takes tragedy to bring the community together. However, I am grateful that we are here to mourn the lives of these two brave men.”

“A blanket,” said Martinez Muela. And like one beautiful tapestry, “all of us our own unique thread. But woven together we are so strong.”

And while the community just lost two officers, she added, “our blanket is just getting stronger and warmer today.”

The Peace Officers Research Association of California, or PORAC, established a fundraising campaign on behalf of the officers’ families.

The fundraiser can be found at porac.org/fundraiser/el-monte-police-officers/