AN AWESOME AUTUMN: A late flush of colour revives borders and is a boost for bees 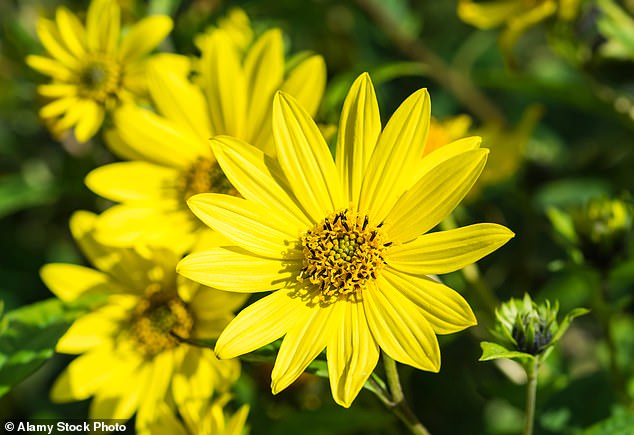 AN AWESOME AUTUMN: A late flush of colour revives borders and is a boost for bees

By Nigel Colborn for the Daily Mail

A friend once asked which was my favourite month. Without hesitation I said, ‘September’. Nature turns green to gold this month. But after the sweltering summer, our reviving gardens are creating a second spring. Some of the year’s finest perennials are coming out now.

Some of those will last until November. Autumn flower colours are rich and mellow, enhanced by softer light and backed by the russets and gold of autumn foliage.

Late-flowering daisies in purples, blues and pinks contrast with rusty heleniums and yellow rudbeckias. Summer pots, too, develop a second wind if watered and fed. Potted begonias, lobelias and pelargoniums could flower until November. There are autumn bulbs to enjoy now, as well — from huge, untidy crinums and long-stemmed nerines to leafless colchicums and for later, yellow sternbergias.

Colours of autumn bulbs include shades of pink or lilacmauve, as well as white.

Nigel Colborn says Autumn flower colours are rich and mellow, enhanced by softer light and backed by the russets of gold and autumn foliage

Late flowering plants are also valuable to bees, butterflies and other nectar-seeking insects. Many need extra sustenance for successful hibernation.

If your garden looks tired, with stressed lawns, shabby containers and disappointing borders, don’t despair. The changing season will help to fix that.

Nights are growing longer and cooler. Mornings usually have heavy dews turning your lawns to silver.

Perovskia combines blue flower spikes with its own silver leaves.

If your garden seems short of flowers, plant more late bloomers. Some, like perennial sunflowers Helianthus, are at their best. Colours run from the vibrant yellow Monarch to the slightly paler Lemon Queen.

In most gardens, the daisy family leads an autumn show. Summer varieties such as rudbeckias and echinaceas still have weeks to run.

But as they age, Michaelmas daisies and chrysanthemums are budding now.

The names can be misleading. Michaelmas daises used to be Aster but many are now called Symphyotrichum. Despite the confusion, variety names have stayed the same.

Sadly, many Michaelmas daisy varieties are susceptible to mildew. Luckily, there are resistant varieties such as shimmering blue, mid-height S. Little Carlow and silvery S. Oktoberlicht.

Colchicums are among the first bulbs to bloom in September, followed by true crocuses such as C. speciosus.