In a post-Coronavirus world, film marketers have had to come up with creative strategies to promote big Bollywood films, like Shakuntala Devi, Dil Bechara and Gunjan Saxena, ahead of their digital releases.

In the run up to her last release, Shakuntala Devi, Vidya Balan was asked by Film Companion’s Sneha Menon Desai if there was anything she missed while promoting the film about the Maths genius. “I am not missing going on those reality TV shows at all,” replied the actress, with her trademark infectious laugh.

Amazon Prime’s Shakuntala Devi is part of the burgeoning list of films that released straight on OTT since the Coronavirus pressed pause on theatrical releases in March this year. It’s not just a different medium that films like Gulabo Sitabo, Dil Bechara and Gunjan Saxena: The Kargil Girl have in common. Limits on travel, social distancing norms and no reality shows being shot has meant that film marketers have had to come up with creative strategies to promote these films.

In pre-pandemic times, a fortnight before an A-list movie star’s film was slated to release, they’d be everywhere. Actors would be smiling at you in newspapers and from hoardings; issuing challenges on social media that could be as basic as shaking a leg to the film’s music, reciting a tongue twister or posing with a sanitary napkin; they’d be on every reality show hawking their film and doing the same tired hook step; and at college festivals, sporting and music events, and shopping malls. And, don’t forget the hundreds of interviews on TV channels, newspapers and online publications. It’s the same drill, film after film, that’s remained unchanged for over a decade or so.

Actors have often described the four-five week experience of promoting a film to be more gruelling than the process of actually making the film itself. Considering the print and publicity budget of a big Hindi film is in the region of Rs 25-30 crores (one-fourth of this includes the cost of the film’s theatrical prints), one could shoot a modest-sized film with the same resources.

Vidya Balan in a still from Shakuntala Devi

It’s no secret that actors hate this promotional circus. Years ago during the promotional blitzkrieg for his film Kick, Salman Khan said to me, “Once the trailer and posters of my film are launched, I really don’t know why we need to do all this. People who go to see my films make up their minds based on the promos and songs. Twenty thousand TV appearances and interviews are not going to convince anyone”. Salman wasn’t wrong. A 2018 report by the research agency Ormax Media stated that it’s a film’s promos and the star cast that drive the audience to theatres. As per the report, viewers discover promos on YouTube and as marketing tools, mall and college festival visits by stars, reality show appearances and paid articles in newspapers are as good as throwing money away.

Producers and studios will tell you that it’s the stars that want lavish marketing budgets to stand out in an already cluttered market space. It’s almost like the writing’s been on the wall for everyone to see, but nobody wanted to bite the bullet. Till now that is.

Typically, all movie campaigns would have a combination of hoardings, print and digital ads and on-ground events. Now, though, with the marketing departments of OTT platforms taking over the film’s release publicity, there is a distinct shift in spending patterns.

Television spends from typical trade focused music channels have moved to general entertainment and news channels. Budgets for outdoor and print have moved online. A large percentage of the media spends are funnelled into Twitter, Facebook, Instagram and YouTube. On-ground events like mall and college visits have been replaced with virtual concerts and fan meets. For Shakuntala Devi, Vidya Balan attended an online song launch with 5000 students from DAV Schools and Colleges, while in the run up to the release of the Tamil film Ponmagal Vandhal, actors Jyotika and Suriya participated in a virtual meet with 100 fans.

There are over 400 million smartphone users in India so the digital revolution is well and truly underway. 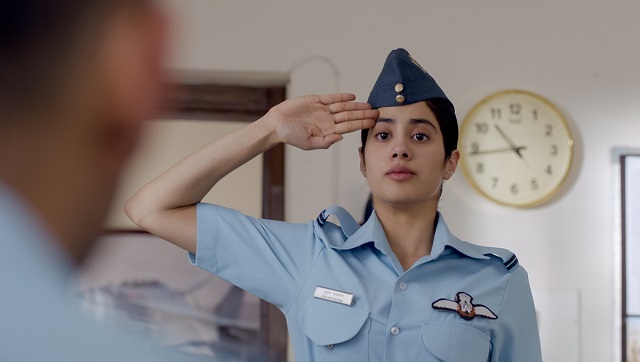 Janhvi Kapoor in a still from Gunjan Saxena: The Kargil Girl

Gaurav Gandhi, director and country general manager, Amazon Prime Video, India believes that this period of lockdown has ‘pushed the audience to embrace it even more’.“While TV continues to have a role to play, there is a genuine movement to consuming content online and also engaging online. We learnt a lot with the marketing of our shows like Pataal Lok and Four More Shots that we’ve used in the promotion of our films,” he explains, adding, “We had a playbook of ideas and plans that we had used in the past and now we plan to build on those ideas. We’ve even had brands come on board with each of these films and do digital first campaigns with the talent.”

This pivot to digital is here to stay even in the post-pandemic world says Vishal Ramchandani, Business and Marketing Head, Excel Entertainment. “There is a sense of fatigue when producers are using template ways to market their films where they will have to go to x number of reality shows and have brand associations. Every marketing campaign requires a content strategy, which helps you break clutter and amplify the desirability of the product. It’s not enough to send an actor to a reality show. For a film to make Rs 300 crores at the box office, I need 30 million people or even lesser to buy a ticket. Digital has that kind of reach today,” he says. For the announcement of their new film Phone Bhoot, a horror comedy starring Katrina Kaif, Ishaan Khattar and Siddhant Chaturvedi, Excel released five spots of digital content that ‘drove home the fun aspect of the film’.

All of this is great, most film producers would tell you before reminding you that the economics of releasing a film on an OTT platform still don’t work for most large projects. But, there are some valuable lessons to be learnt during this period that could become a part of the ‘new normal’ and most of them are to do with the efficiency of a producer’s marketing spends. If the draw of content has taken over the draw of a star cast when it comes to the film itself, it might be time for the content plan to take over a film’s marketing.

Virtually all parts of Britain are now seeing prices increase »

CNN’s Biden town hall at the drive-in: This is what a...