Avs pour it on, Von Miller makes an appearance and more from Game 2 of the Stanley Cup Final 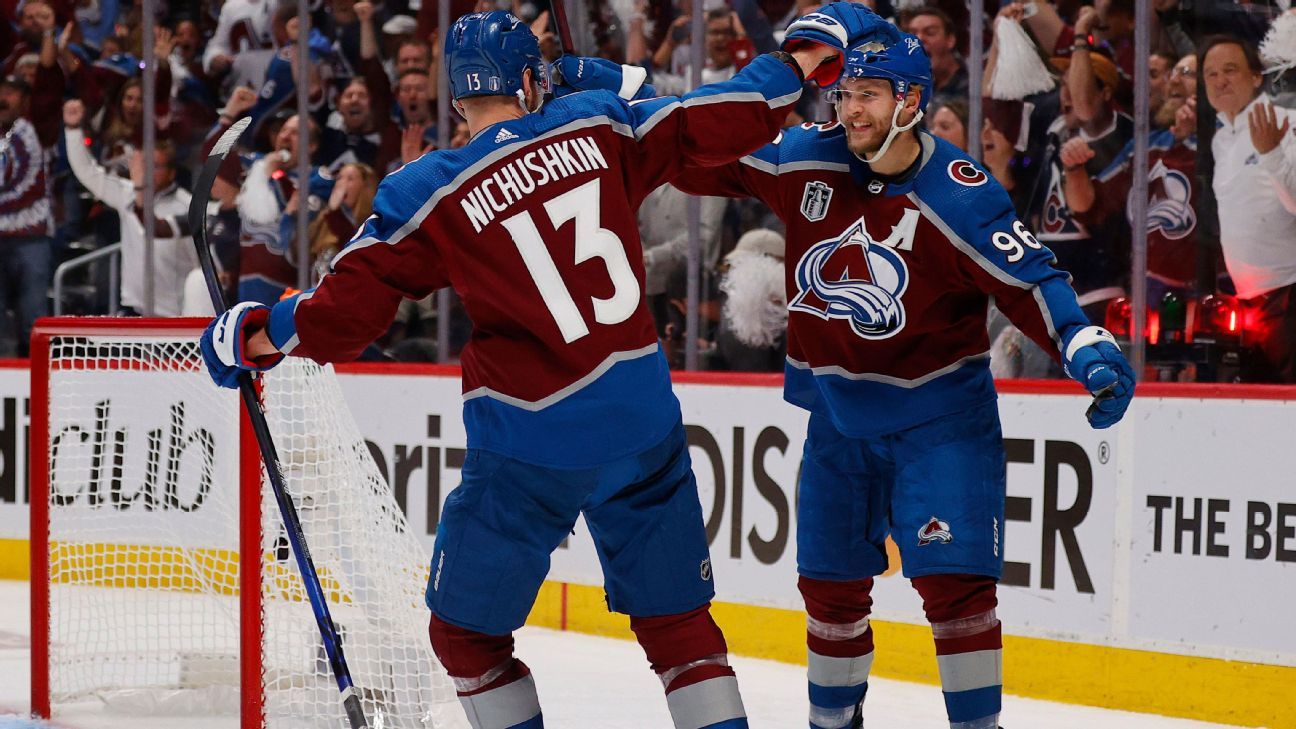 Game 1 of the Stanley Cup Final saw the Colorado Avalanche withstand a Tampa Bay Lightning comeback with a game-winning goal in overtime. If the rest of the series is like Game 1, we could be in for an entertaining championship round.

Wednesday was the fourth Game 1 Colorado win this postseason, the ninth team in Stanley Cup Playoff history to achieve the feat per ESPN Stats & Information. The previous eight all went on to win the championship. The Avalanche have a 21-11 record when leading 1-0 in a best-of-seven series.

If the Lightning fall into an 0-2 hole for the second straight series, it could be the beginning of the end for them. Only five teams have seen that series deficit in both the semifinals/Conference Finals and the Cup Final of the same postseason, and none since the Blackhawks in 1965. None of those five squads went on to win the Stanley Cup.

Here’s a look at the best scenes from Game 2 of the Stanley Cup.

The resurrection of Valeri Nichushkin continues in earnest. For the second straight game, Nichushkin is arguably (or even inarguably) Colorado’s best player. And Game 2 has been even better than Game 1.

It’s not just that Nichushkin is putting up points (he has two of Colorado’s five goals so far). The winger is also playing terrific defense. He’s forechecking. He’s making plays. Every shift Nichushkin takes feels like it could be a difference-maker for the Avalanche.

And Tampa Bay has no answer for Nichushkin. They can’t bully him off the puck or stand up to his physicality. Nichushkin has been able to have his way at both ends of the ice.

When he skated through the Lightning defense with another great move, Andrei Vasilevskiy had to make a highlight-reel save to hold off a Nichushkin hat trick. Same thing late in the period on the power play.

Colorado’s depth was always going to challenge Tampa Bay. Perhaps the Lightning didn’t anticipate how much. For all the good things Nathan MacKinnon, Gabriel Landeskog and Cale Makar can do, they’re not the ones inflicting the most damage right now. It’s Nichushkin, Andre Burakovsky and role players like Darren Helm and Josh Manson pushing their buttons. — Kristen Shilton

I asked Lightning coach Jon Cooper today about his team’s incredible defensive numbers in Game 2s since 2020, as Tampa Bay had a 1.91 goals-against average and went 9-2 in that span.

“You have to have a group that’s going to do it, willing to commit to doing the things that need to be done. But I think playing that one game, the first game, now you’ve got a little bit of feel for the team, and I think that goes for everybody from the goalie on the way out,” he said. “That’s not to say, ‘Oh my gosh, we’re going to win tonight.’ I’m not saying that, but we’re more comfortable now with what we need to do in our game, and I think getting through that Game 1 is part of that process.”

Welp, there goes that theory!

It can’t be underscored enough how uncharacteristic this 5-0 Game 2 deficit is for the Lightning. They had never given up more than three goals in a Game 2 in that 11-game span. Andrei Vasilevskiy had a .938 save percentage in those games; against Colorado in Game 2, he has a .783 save percentage so far. Another huge change for the Lightning: they scored the first goal in nine of those 11 games.

In Game 2 against the Avalanche, they’ve yet to score through two periods. Colorado has done so five times. — Greg Wyshynski

… but five goals for the Avalanche, with the latest by Darren Helm. If the Lightning have any ideas on how to stop the onslaught, now’s the time.

The goals keep coming for the Avs. Valeri Nichushkin scores for the second time in Game 2 to make it 4-0.

Two thumbs up for the start of period two, right @VonMiller?#GoAvsGo pic.twitter.com/MfgmZ6g5BN

Former Avalanche player Matt Calvert is present at the Ball Arena to cheer on his old squad. Calvert played for the team from 2018-2021.

Colorado put on a clinic in the first period.

Despite Tampa Bay’s pledge to weather the first 10 minutes better in Game 2 than it did in Game 1, the Avalanche have been all over the Lightning.

It started with Colorado’s play through the neutral zone. The Avalanche were so active with their sticks disrupting plays and turning pucks over to halt any attempts by Tampa Bay to enter the zone. And when the Lightning did make it across the blue line, Colorado suffocated defensively by forcing them to the outside, laying hits along the boards and breaking up passes. The Avalanche are shutting down shot lanes with gusto. Tampa Bay can barely get a look on goaltender Darcy Kuemper.

Colorado is also so good at creating those odd-man rush opportunities, including the one Josh Manson scored on to make it 2-0. The Avalanche are executing so crisply at both ends of the ice that every mistake the Lightning make winds up either around — or in — their net. Colorado saw many of its chances blocked in Game 1. They’ve adjusted and are going in tight on Vasilevskiy for tap-in goals. So far, it’s working. — Kristen Shilton

The first period of Game 2 was an abject disaster for the Tampa Bay Lightning, a team that vowed to have a better start and be better overall in Game 2.

Anatomy of a terrible start, Part 1: The Lightning began the game with their checking line against Nathan MacKinnon’s line. It started strongly as their forecheck forced the Avalanche’s top line to defend in their own zone. Then defenseman Erik Cernak fumbled the puck at the blueline. Then the Lightning turned the puck over in their own zone twice, while the referees let a hooking call on the Avalanche against Alex Killorn go. Then defenseman Ryan McDonagh took a hooking penalty just 1:01 into the game, giving the second-best power play in the playoffs (31.3% efficiency) a chance to cook. And then it was 1-0.

Anatomy of a terrible start, Part 2: The Lightning were again on the forecheck, with all three forwards against the end boards. The puck squirted loose. McDonagh tried to pinch to play it. Instead, it was Avalanche forward Alex Newhook who made a quick pass to spring an odd-man rush the other way that resulted in Josh Manson’s goal. And then it was 2-0.

Anatomy of a terrible start, Part 3: Goalie Andrei Vasilevskiy entered the game with a .938 save percentage in Game 2s since 2020. While Vasilevskiy could take a portion of the blame on the first two goals, this was a tough look for the Big Cat. His defense melted down in front of him again, but it was Vasilevskiy that kicked the puck on a Mikko Rantanen shot to the slot where Burakovsky was there to deposit the rebound. That made it 3-0, in just 13:52 of the first period.

The Lightning were outshot by the Avalanche, 11-4, and Colorado had a 22-8 shot attempt advantage. — Greg Wyshynski

Andre Burakovsky has made it 3-0 in the first period, and the Avalanche have more goals than the Lightning do shots on goal. This could get out of hand soon. History isn’t on Tampa Bay’s side — the last team to win the Cup after facing a multi-goal deficit in both Game 1 and 2 of the Cup Final was the Kings in 2014 against the Rangers.

Burky with the third goal in the first period.
Worth getting up at 6am for!#GoAvsGo pic.twitter.com/8yBCTJz6aw

It didn’t take long for the Avalanche to extend their lead. Josh Manson scored a goal five minutes after Nichushkin to give Colorado a 2-0 lead. According to ESPN Stats & Information, Manson’s goal is the 15th by the Colorado defense this postseason which leads all teams. It also ties the most by defensemen in a single postseason in franchise history (15 in 2001).

Valeri Nichushkin opened the socring with a power play goal less than three minutes into the game to give Colorado a 1-0 lead.

That’s how you kick it off 😎#GoAvsGo pic.twitter.com/M8LvLSGKgK

At least one bachelorette party is in the house for Game 2 … and they’re hoping for a win.

Fascinated by the planning, or lack thereof, to have a bachelorette party at Game 2 of the Stanley Cup Final. In any case, pretty awesome. pic.twitter.com/A1rMFPxEiZ

A who’s who of celebrities wished the Lightning luck before Game 2, including Tom Brady and the “Nature Boy” Ric Flair.

Jay, a fan attending Game 2 is clearly rooting for the Avalanche — just look at his custom blazer.

This is Jay. It’s entirely possible that he’s the best dressed person at Game 2 of the #StanleyCup Final with this @Avalanche formalwear. pic.twitter.com/XUx7Fu2MA9

As is their tradition, Avalanche fans sang along to Blink-182’s hit “All the Small Things” during Game 1. The song made another appearance at the watch party Saturday.

Colorado players arrive at the Ball Arena looking to go up 2-0 on the defending champs.

Bringing it back. #GoAvsGo pic.twitter.com/yalWxae45t

Bolts in the building. #StanleyCup pic.twitter.com/WES4rTWdqc

Are the Sky on the verge of a repeat, and five more questions that will determine the WNBA champ