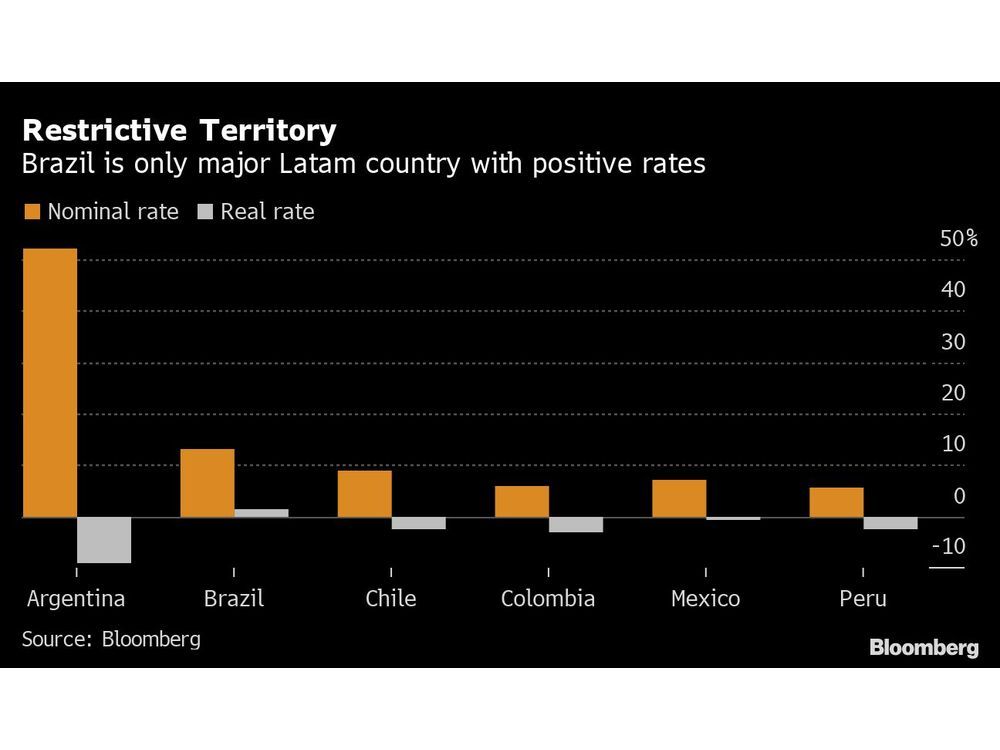 (Bloomberg) — Brazil’s central bank said an extension of its aggressive tightening cycle with another interest rate hike in August is needed to assure that high inflation forecasts will fall back around their target.

Policy makers discussed signaling a steady interest rate for a “sufficiently long” period but concluded another hike would still be needed, according to the minutes of their June 14-15 meeting, when the board raised borrowing costs to 13.25%. Another lift of 50 basis points or less to the benchmark Selic is appropriate to bring consumer price estimates near their goal, they wrote.

“Given the persistence of the recent shocks, the Committee evaluated that only the perspective of maintaining the Selic rate for a sufficiently long period would not assure, at this moment, the convergence of inflation around the target in the relevant horizon,” they wrote in the minutes published Tuesday.

“The strategy of convergence around the target requires a more contractionary interest rate than that used in the reference scenario for the entire relevant horizon,” they wrote.

Policy makers led by Roberto Campos Neto are battling persistent energy and food shocks which have kept annual inflation above 10% since September. Though headline figures eased in May, price pressures remain widespread. In the minutes, the bank said recent cost of living readings “were higher than expected” with surprises in both volatile and core components.

“The message is consistent with our view that policy makers will keep interest rate high for longer to bring inflation down around the target over the medium term. We believe the rate will peak at 13.75% after 25-bp increases in August and September, and anticipate it will stay in double-digits throughout 2023.”

The bank is also weighing bills currently in congress, saying lower fuel taxes this year would have a “sizable” impact on inflation. Those proposals would also fuel cost of living rises in 2023, though by “a smaller magnitude,” according to the minutes.

President Jair Bolsonaro is trying to deflect the blame of the spiking cost of living as polls show him trailing in October’s election. Last week state-controlled oil company Petroleo Brasileiro SA, which is known as Petrobras, said it will jack up prices for diesel and gasoline, raising prospects of fresh increases to inflation forecasts.

Most analysts see inflation at 8.5% this year and 4.7% next, according to estimates published with last week’s rate decision. Policy makers target consumer prices at 3.5% and 3.25% in 2022 and 2023, respectively.

Brazil’s economic activity is expected to decelerate in coming quarters, policy makers wrote. They expect the effects of their aggressive tightening campaign will become stronger starting in the second half of 2022.

At the same time, they said the economy is entering a period of “post-pandemic normalization” at a stronger-than-expected clip. “The set of indicators released since the previous meeting suggests a growth rate above the Committee’s expectation,” which stands at 1% for this year, they wrote.

The minutes were “more hawkish than markets expected,” said Mirella Hirakawa, an economist at local asset manager AZ Quest Investimentos Ltda. “They need higher rates to anchor estimates,” she said, adding that she sees a chance of another increase after the bank raises rates to 13.75% in August.