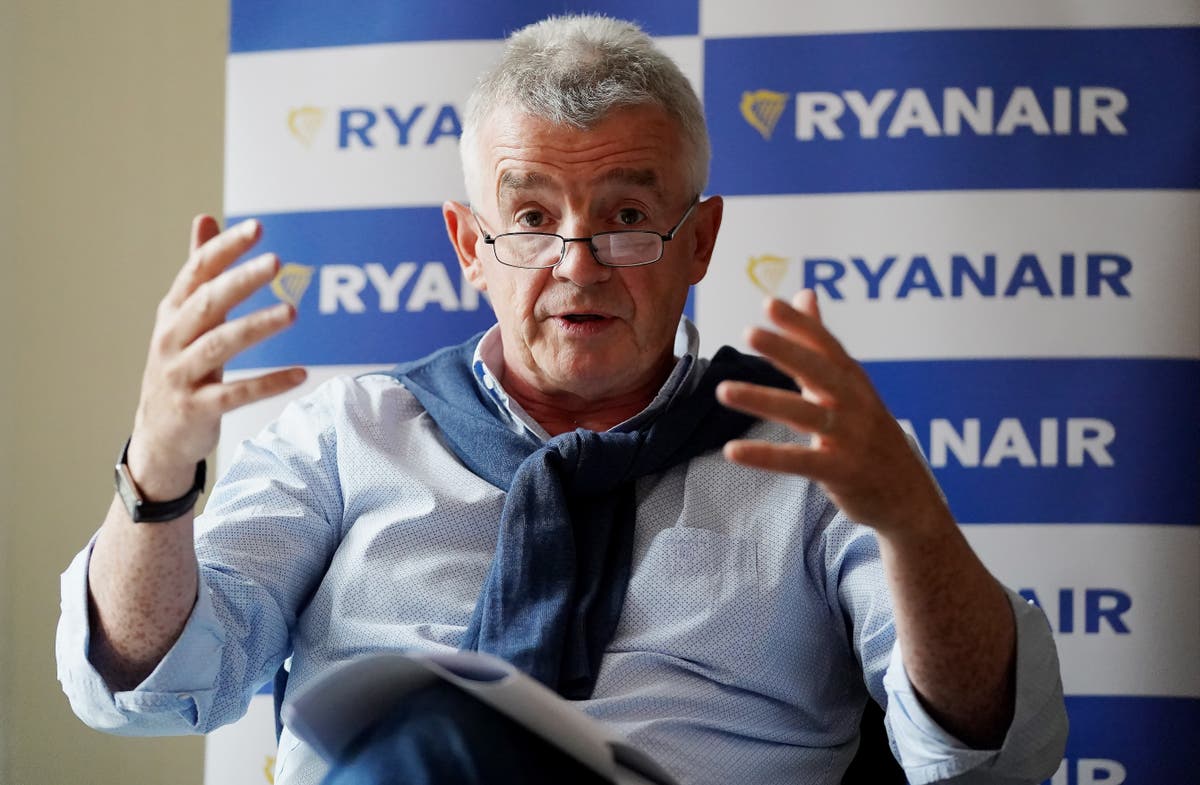 Airport chaos which has seen constant flight delays and cancellations is “completely to do with Brexit”, the boss of the Ryanair airline has said.

Michael O’Leary said Brexit has been an “abject failure” and claimed resolvable labour shortages were behind the disruption at UK airports – adding: “This government couldn’t run a sweet shop.”

Transport secretary Grant Shapps has denied Brexit was to blame for ongoing travel woes, and has accused airlines of “seriously overselling” flights since the Covid pandemic.

Asked about the minister’s comments, the outspoken Ryanair chief executive told Sky News: “It’s completely to do with Brexit. A lot of these pinch points would be solved very quickly if we could bring in European workers.”

Attacking post-Brexit immigration policy, Mr O’Leary said: “We are hide-bound and hamstrung by a government so desperate to show Brexit has been a success, when it’s been an abject failure. It won’t allow us to bring in EU workers to do these jobs.”

The Ryanair boss added: “If we can’t attract people to do those jobs, like baggage handling like security at the airports we’re going to have to bring in workers from Ireland or the continent to do them – and Brexit is one of the big bugbears in the system.”

The boss of budget airline warned that delays and cancellations will continue “right throughout the summer” as airports suffer amid staff shortages.

Mr O’Leary pointed to a lack of staff across air traffic control, baggage handling and security.

He said passengers should brace for a “less than satisfactory experience”, with flight delays due to last across the peak season and some airlines cancelling between 5 per cent and 10 per cent of flights.

On the “deeply regrettable” disruption, he added: “This problem is going to continue particularly at airports like Gatwick and Heathrow right throughout the summer. It will be worse at weekends and better during the week.”

It follows similar comments by Johan Lundgren, chief executive of easyJet, who told The Independent on Monday that Brexit was to blame for disruoption.

He said 8,000 job applications from EU citizens have been rejected by his firm because candidates did not have permission to work in the UK.

“The pool of people is smaller, it’s just maths,” said the easyJet boss. “We have had to turn down a huge number of EU nationals because of Brexit.”

The comments come after Heathrow asked airlines on Monday to cut 10% of flights at two terminals, while easyJet started cancelling thousands of summer flights.

The move by Heathrow affected around 5,000 passengers at Terminals 2 and 3 on approximately 30 flights.

Images emerged on Friday of a huge pile-up of passengers’ luggage to add to passenger woes with delays and cancelled flights.