Britons must decide who stays in UK – not European judges, says Attorney General 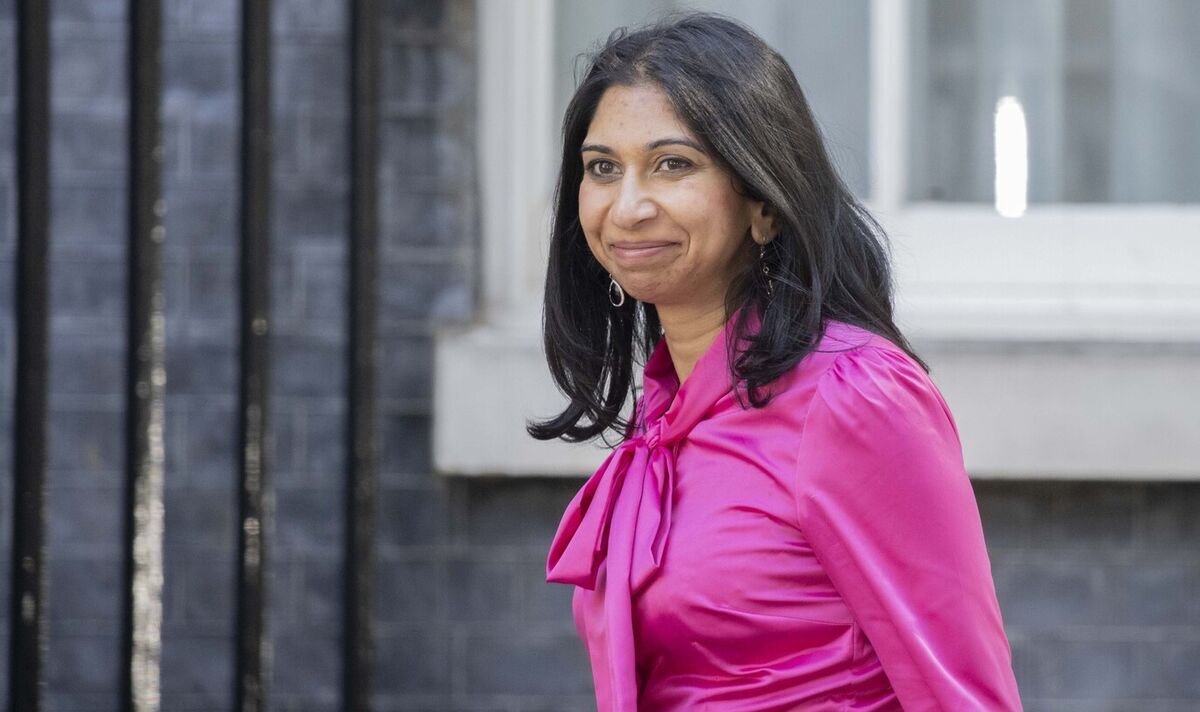 There is fury in Conservative circles that judges at the European Court of Human Rights (ECHR) last week granted an injunction which thwarted plans to send asylum seekers to Rwanda. Prime Minister Boris Johnson yesterday insisted the Government is “very confident” that its plans are lawful and pledged to “pursue the policy”.

He described the ECHR’s actions as a “weird last-minute hiccup we had with Strasbourg” but there is pressure in Conservative ranks to ensure this cannot happen again.

Attorney General Suella Braverman said: “This is still a topic being discussed in government but I have significant reservations about our relationship with the European Court of Human Rights. In the EU referendum the British people voted to take back control of our laws, they are rightly baffled why our immigration controls can still be blocked by European judges.”

“It’s time to complete Brexit and let the British people decide who can and cannot stay in our country.”

She said: “I’m of the view that it is, absolutely. The opaque way this court has operated is absolutely scandalous.”

In the latest bid to ensure that the UK has control of its own criminal justice and immigration policies, Justice Secretary and Deputy Prime Minister Dominic Raab is expected to unveil a “British Bill of Rights” very shortly which will make it easier to deport foreign criminals.

Under the reforms, courts will only be able to block their deportation on the grounds of the right to family life guaranteed in the European Convention of Human Rights if their child or family member would come to “overwhelming harm” that cannot be mitigated.

Mr Raab told the Sunday Express: “For too long the Human Rights Act has put offenders’ rights ahead of the safety of the law-abiding public by allowing foreign criminals to abuse our system and avoid deportation. The Bill of Rights I will introduce shortly will reinject some common sense back into human rights and make it harder for foreign national offenders to appeal against deportation on the grounds of the right to family life.”

Former security minister Sir John Hayes urged Mr Johnson to ensure that the ECHR judges cannot “trump the will of the people expressed through Parliament and Government”.

He said: “It is for the Prime Minister now to take the lead, to either withdraw from the Convention or to make sure that we insulate legislation [so] it can’t be affected by the Convention.”

Tory MPs who won their seats from Labour in 2019 have pressed for action.

Ashfield Conservative MP Lee Anderson said: “I think that if there was a referendum on the ECHR then, just like the EU referendum of 2016, the majority of British people would vote to ditch it in favour of our own Bill of Rights. I would wholeheartedly back this move but I cannot say the same for the whole of Parliament.”

“We cannot allow lawyers and human rights groups, along with the interference of the ECHR, to dictate to the great British taxpayer what our immigration policy should be.”

Dudley North Conservative MP Marco Longhi said his constituents voted for Brexit to “take back control of our laws and our borders”.

He warned: “What’s just happened, unfortunately, is a visible expression of not delivering on that yet…”

Rother Valley Conservative MP Alexander Stafford said it was a “ridiculous situation” when a “foreign court” says “you can’t do something”.

He said: “That’s just silly. It goes against the whole notion of Brexit.”

Under the Ministry of Justice’s plans, the UK will remain party to the European Convention on Human Rights. Any move to withdraw from the Convention would trigger intense controversy among Conservatives.

Warning of the consequences for both the Tory party and the deal which underpins the Northern Ireland peace process, former First Secretary of State Damian Green said: “The parliamentary party would be split. We fought the last election on a pledge to update human rights laws, which is sensible.”

“Pulling out of the Convention altogether would tear up the Good Friday Agreement, which I am sure no one wants.”

Ex-International Development Secretary Andrew Mitchell also opposed Britain abandoning the Convention, saying: “I think it would neither be wise nor necessary and I very much doubt a Conservative government would leave a key part of the international infrastructure which benefits us and which we helped set up and develop.”

Former Brexit minister David Jones, a lawyer, does not expect the Strasbourg court to consider further applications against the Rwanda policy, and stressed Britain’s ancient commitment to human rights.

He said: “I think what we have to remember in this country is that our adherence to human rights long predates the Convention. I mean, arguably we invented human rights with habeus corpus.”

“I think a lot of people will be wondering why the country that developed habeus corpus and was, therefore, the pioneer in developing human rights should be constrained by a foreign court where judges make snap decisions [with] minimal evidence.”