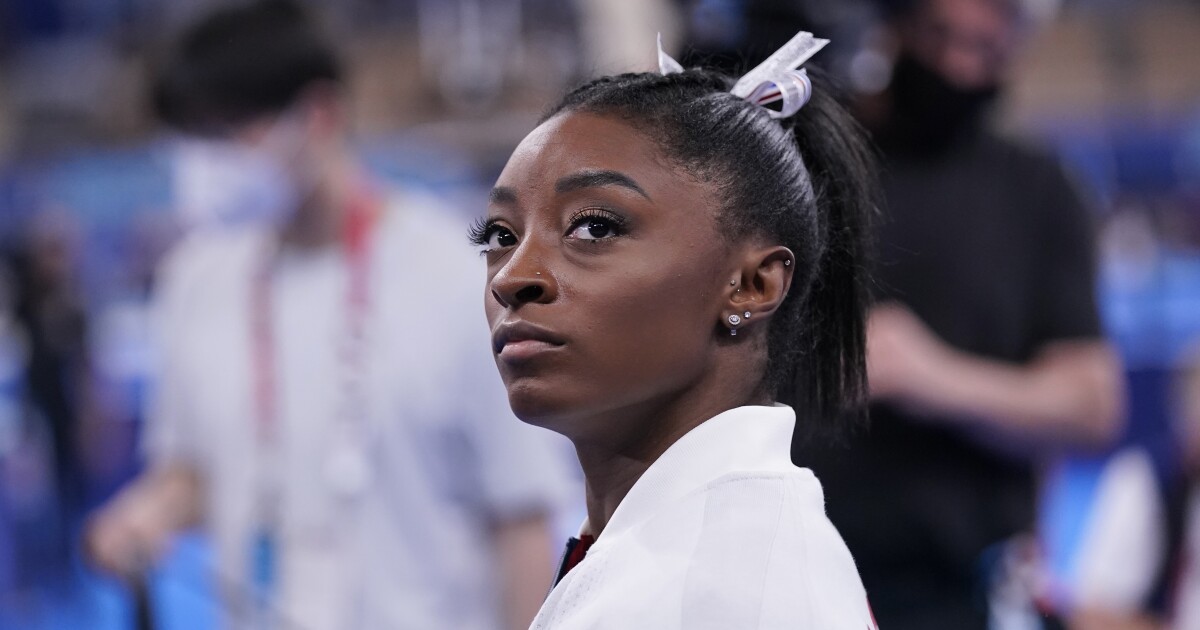 Celebrities and athletes are rallying behind gymnast Simone Biles after her decision to withdraw from a competition at the Tokyo Olympics to care for her mental health.

The 24-year-old drew broad praise for prioritizing her well-being above the games and also drew comparisons to tennis star Naomi Osaka, another superstar athlete of color who cited her mental health when she withdrew from the French Open and Wimbledon earlier this year. (Still, there were some detractors who felt that Biles should have powered through.)

On Tuesday, Biles, the most decorated women’s gymnast of all time, sat out of a U.S. team competition because she wasn’t in the right headspace to compete and didn’t want to go into any other events “second-guessing” herself.

The U.S. team scored the silver medal, finishing second behind athletes of the Russian Olympic Committee. Biles told reporters that she wasn’t yet ruling out returning to compete later in the tournament, saying she was taking things “day to day.”

Biles later clarified that she was fine — physically.

“Physically, I feel good, I’m in shape,” she told Hoda Kotb on NBC’s “Today” show after her withdrawal. “Emotionally, that kind of varies on the time and moment. Coming to the Olympics and being head star isn’t an easy feat, so we’re just trying to take it one day at a time and we’ll see.”

As Times sports columnist Helene Elliott points out, Biles recently spoke about feeling intense pressure to succeed at the Tokyo Games and has figured prominently in NBC’s promotions of the global event.

Biles also has said she is still dealing with trust issues regarding USA Gymnastics after having been sexually abused by former national team doctor Larry Nassar, who abused hundreds of women and girls before he was sentenced to prison.

Biles told reporters that she was dealing with “demons” and would use Wednesday as a “mental health day.”

Her former teammate Aly Raisman praised her decision to sit out the competition and, like many, sent love to the G.O.A.T on Twitter: “Just a friendly reminder: Olympic athletes are human & they’re doing the best they can. It’s REALLY hard to peak at the right moment & do the routine of your life under such pressure. Really hard.”

“Simone Biles deserves rest, thanks for her exceptional service, and us to leave her the f— in peace. #TokyoOlympics,” tweeted actress Aimee Carrero, who voices the titular characters in Netflix’s “She-Ra” series and Disney Channel’s “Elena of Avalor.”

“You are incredible #SimoneBiles,” wrote “2 Broke Girls” alum Beth Behrs. “I wish I’d had the strength and bravery in my 20s to prioritize my mental health the way you and have done. You and @naomiosaka have set an incredible precedent for all the young girls who look up to you, and to this gal in her 30s. Thank you”

Her sister, Adria Biles, also took aim at detractors: “y’all are all about mental health until it no longer benefits you.. i can’t imagine being that inconsiderate WHEWWWW”

Here’s a look at the support Biles received from Hollywood and beyond.

Share
Facebook
Twitter
Pinterest
WhatsApp
Previous articleBuddy Guy, turning 85, is still working to keep the blues alive
Next articleNow Disney is closing most of its stores in Canada — so what hope is there for other retailers?

WhatsApp Pay: Good news for WhatsApp users! Now you will...