HomeEntertainmentDaBaby doubles down on his homophobic and misogynistic remarks at Rolling Loud...
Entertainment 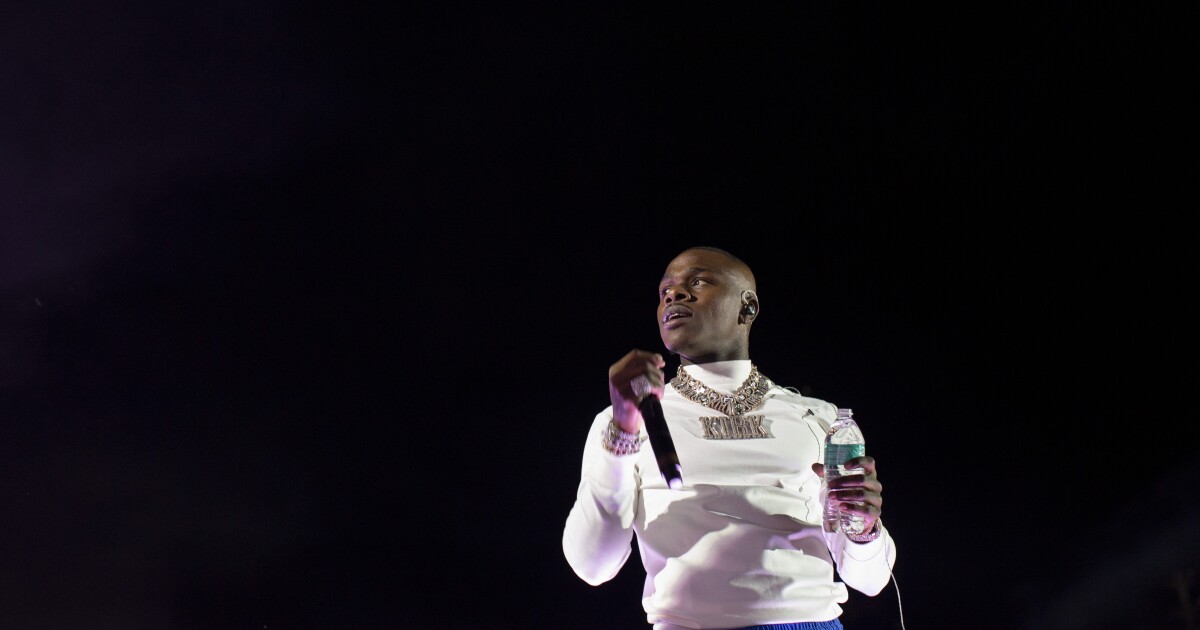 After a tumultuous set at the Rolling Loud hip-hop music festival in Miami over the weekend, rapper DaBaby is now under fire for his offensive behavior onstage.

On Sunday, he performed immediately after fellow rapper Megan Thee Stallion and then invited Tory Lanez onstage, less than a year after Lanez was charged with shooting her in the foot. Many interpreted that as a sign of deep disrespect to the Grammy-winning rap artist, and one audience member even hurled an Adidas shoe at DaBaby, which he dodged.

This wasn’t the first fracture in the two rap stars’ relationship. Megan, who featured DaBaby on her songs “Cash Sh—” and “Cry Baby,” previously called him out online for retweeting a post that made light of the shooting, according to Vulture.

To make matters worse, during Sunday’s performance DaBaby, 29, instructed attendees to put their cellphone lights up “if you didn’t show up today with HIV/AIDS or other sexually transmitted diseases that’ll make you die in 2-3 weeks” He named other profane qualifiers and made a remark — addressed to the “fellas” in the audience — about oral sex between men, which prompted an online backlash and accusations of homophobia.

Rather than apologizing, DaBaby took to his Instagram story on Monday to say that the internet “twisted” his words and the people who didn’t pay to see him “wasn’t supposed to see that sh— anyway” and, therefore, shouldn’t comment.

On Twitter, users did not hold back in calling him out.

“So DaBaby delivered a side of homophobia with his misogyny?” wrote one user.

“I can’t believe Dababy went to clarify his comments and made it 100 x worse. Stupid guy,” someone else commented.

On his Instagram story, the rapper said that his declaration wasn’t a rant but “a call to action,” proclaiming that his fans “ain’t no nasty gay n—” or “junkies.”

Coming to his defense was rapper T.I., who has his own history with problematic jokes about bodily autonomy. The 40-year-old rapper shared his unsolicited thoughts on IGTV and attempted to make comparisons to out musician Lil Nas X.

On Tuesday, pop musician Dua Lipa, who featured DaBaby on her hit “Levitating,” condemned her former collaborator on her Instagram story.

“I am surprised and horrified at DaBaby’s comments. I really don’t recognise this as the person I worked with,” she wrote in a statement. “I know my fans know where my heart lies and that I stand `100% with the LGBTQ community. We need to come together to fight the stigma and ignorance around HIV/AIDS.”

While Rolling Loud has yet to publicly comment on DaBaby’s speech or surprise cameo by Lanez, its official Twitter account did craft a witty tweet comparing DaBaby’s sneaker-dodging to that of former President George W. Bush.