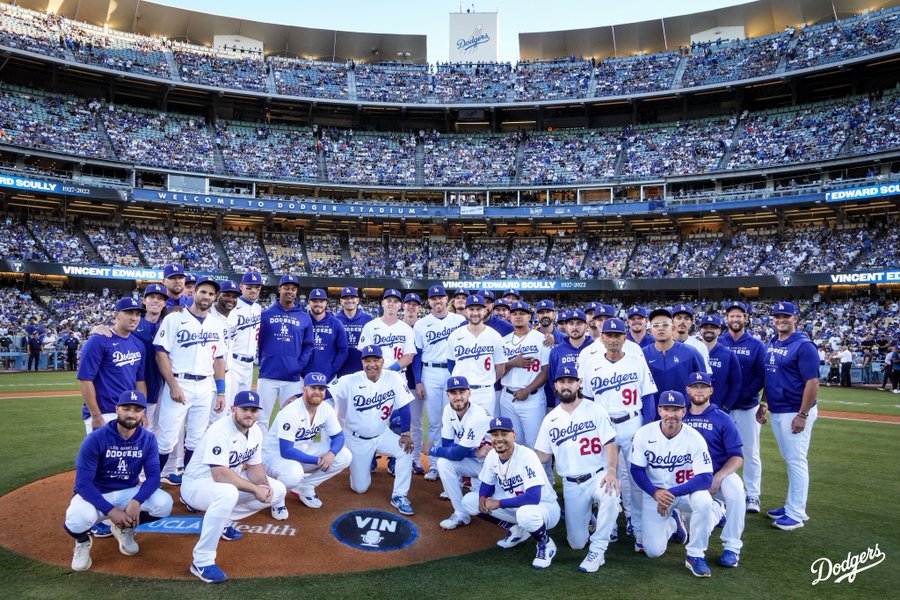 The L.A. Dodgers paid tribute to legendary sportscaster Vin Scully who passed away at 94 on August 2, 2022
(Twitter photo)

The Los Angeles Dodgers return to Dodgers Stadium days after the passing of legendary sportscaster Vin Scully to defeat the San Diego Padres 8-1. This first game of their weekend series was dedicated to Scully’s life and legacy.

Scully had a 67-year career with the Dodgers, having announced 9000 broadcasts and over 20 no-hitters. Prior to the game, the Dodgers took center field and general manager Dave Roberts told a speech to honor Scully.

“Vin was a man of character, integrity, class, a true gentleman,” Roberts said in the speech. “He wasn’t just a Dodger, he loved the game of baseball.”

The general manager led all 52,714 fans in the stadium to say his iconic phrase: “It’s time for Dodger baseball.”

They showed the episode of “Backstage: Dodgers” that was about his last day announcing for the Dodgers in a regular season. An icon of a microphone was painted on the pitcher’s mound. Known for his superb storytelling skills, They played a recording of him telling an anecdote of him and Jackie Robinson racing on ice skates.

For the rest of the season, Dodgers players will wear black patches with the word “Vin” and a microphone on them to commemorate the legendary sportscaster.

There’s a vigil in honor of legendary sportscaster Vin Scully on Stadium Way. Tonight, the Dodgers honor his life and legacy. #RIPVinScully pic.twitter.com/UQopdXdZHQ

The Dodgers scored four runs to kick off the night. Will Smith slugged a two-RBI double and Hanser Alberto did likewise two batters later. The Padres missed catches which allowed the Dodgers to advance bases.

Manaea defended for the Padres in the second, only allowing three at bats. However, the Dodgers found their offense in the third. Freddie Freeman swung a single and Trea Turner came up next, batting a double. This set up Chris Taylor for a 2RBI double, notching up the Dodgers’ score to 6-0.

Prior to Cody Bellinger being up at bat, the Padres got two consecutive outs. Bellinger also hit a two-RBI double, solidifying the score at eight runs. 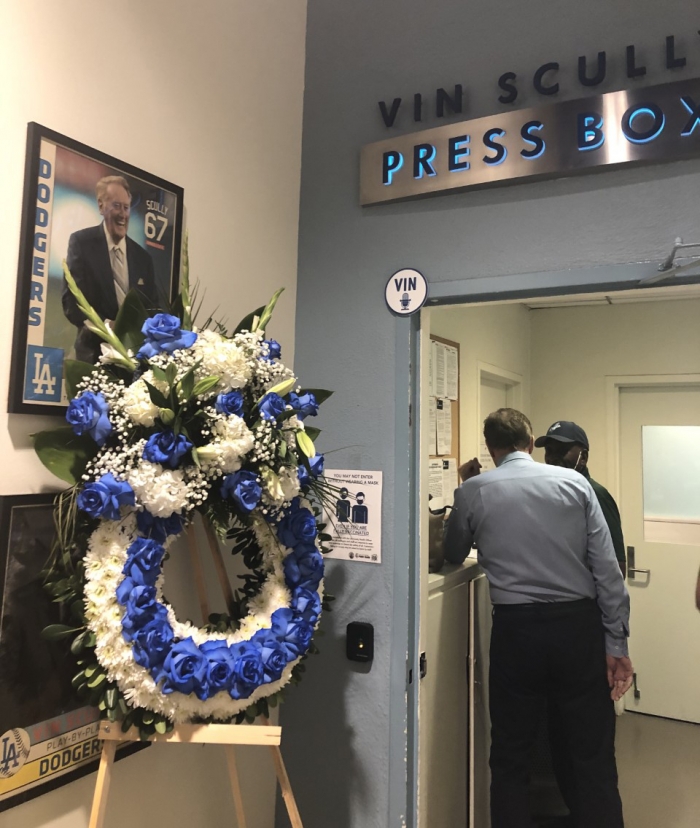 A wreath stands out in front of the Vin Scully Press box (Amanda Scurlock/L.A. Sentinel)

“Definitely trying to attack guys and stay ahead,” Gonsolin said. “It’s sort of great when our hitters hit like they do, it gives a lot of that support.”

The Padres reached the scoreboard in the final inning when Brandon Drury made a sacrifice hit, allowing Josh Bell to sprint home. The next batter’s out ended the game.

Manny Machado and Padres new addition Juan Soto received generous amounts of jeers from the sellout crowd at Dodgers Stadium. The newly crowned Home Run Derby champ Soto was the main talk around the MLB trade deadline, back when he was with the Washington Nationals.

Last week, he helped the Nationals win two of three games against the Dodgers: batting in two runners in the first game and securing a run in the second at Dodgers Stadium.

On Friday, Soto had three at bats and one hit.

The Dodgers have their second game in the three-game series on Saturday at 6:10pm.