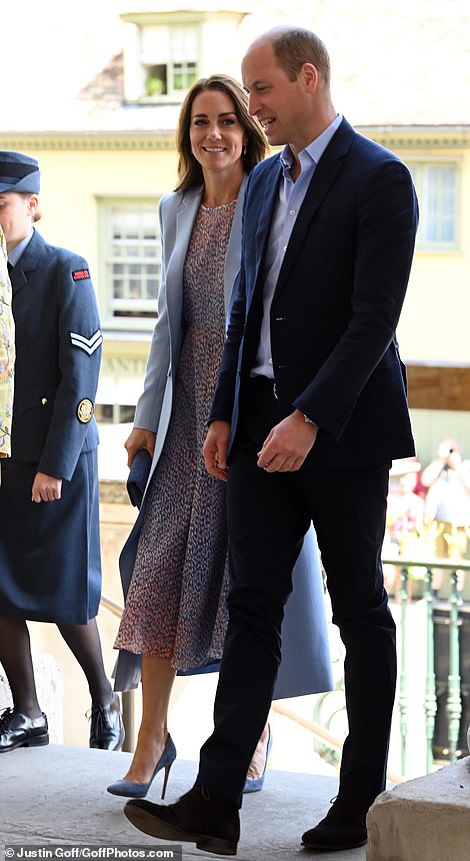 The first official joint portrait of the Duke and Duchess of Cambridge has been unveiled today to mark the couple’s visit to Cambridgeshire to celebrate the county.

On their first stop of the day, Kate, wearing a blue patterned dress, and William, both 40, visited the University of Cambridge’s Fitzwilliam Museum, where they viewed the painted portrait of themselves as it was revealed to the public for the first time.

The first official joint artwork captures Kate looking ethereal in a £1,595 glittering emerald gown by trendy designer The Vampire’s Wife, which she first wore during a historic three-day visit to Dublin in March 2020. She is seen posing with her arm wrapped around a dapper William, who is dressed in a sharp suit with a blue tie.

After viewing the portrait, The Duke and Duchess then met with supporters of the project including the artist and Lady Sibyl Marshall – the wife of the late Sir Michael Marshall, who originally proposed the idea to create the portrait. 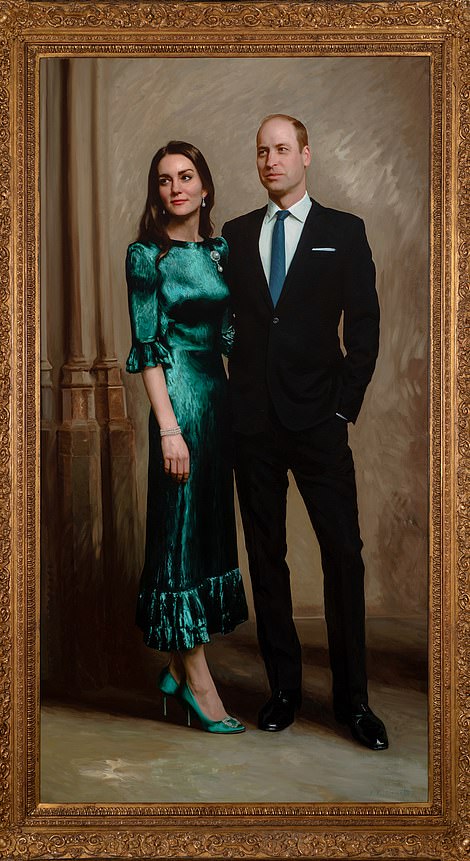 The first official joint portrait (pictured right) of the Duke and Duchess of Cambridge has been unveiled today to mark the couple’s visit to Cambridgeshire to celebrate the county. On their first stop of the day, Kate, wearing a blue patterned dress, and William, both 40, visited the University of Cambridge’s Fitzwilliam Museum, left 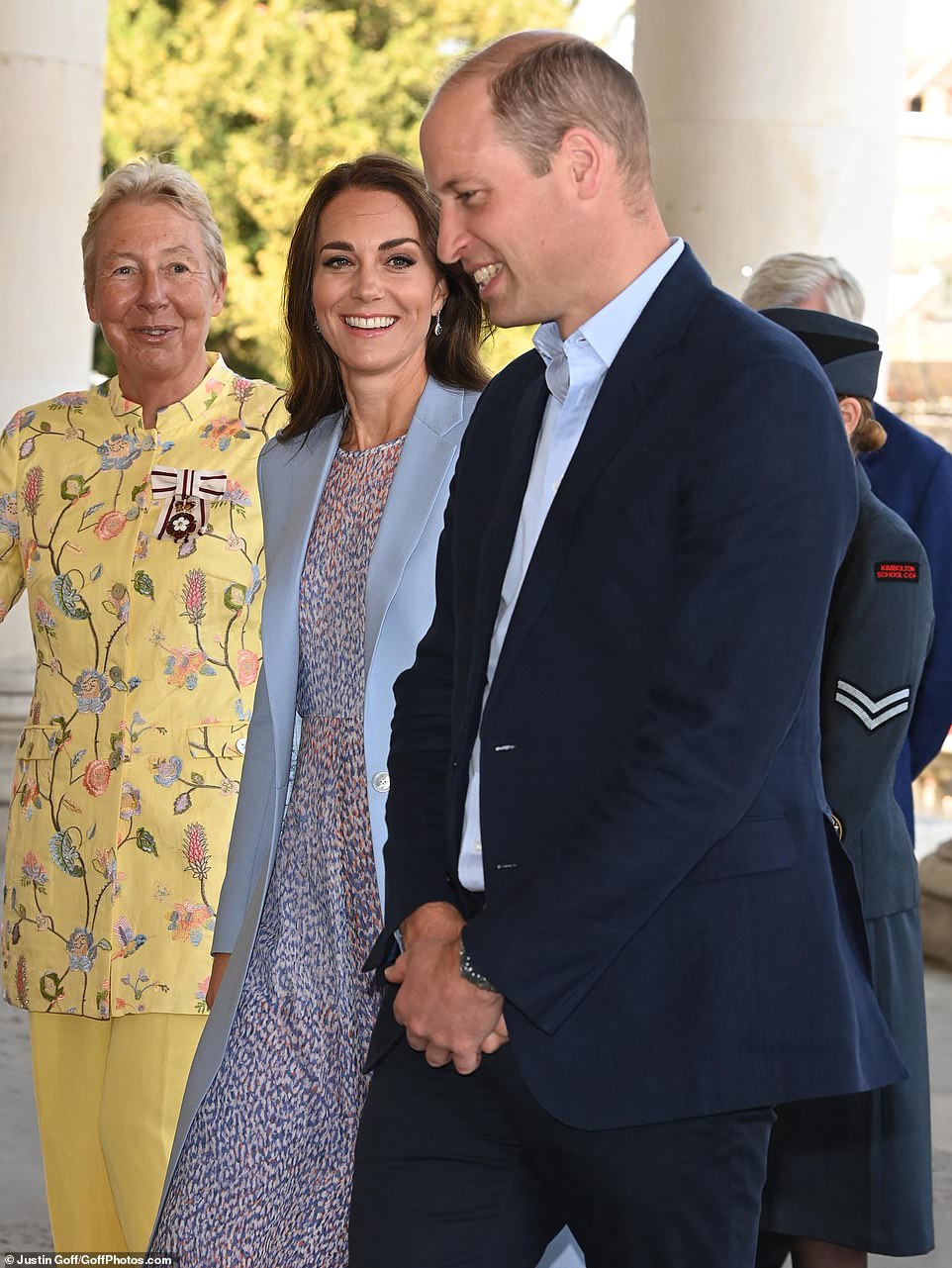 Stunning: Kate appeared radiant in a multi-coloured dress teamed with a blue coat while attending the outing with William 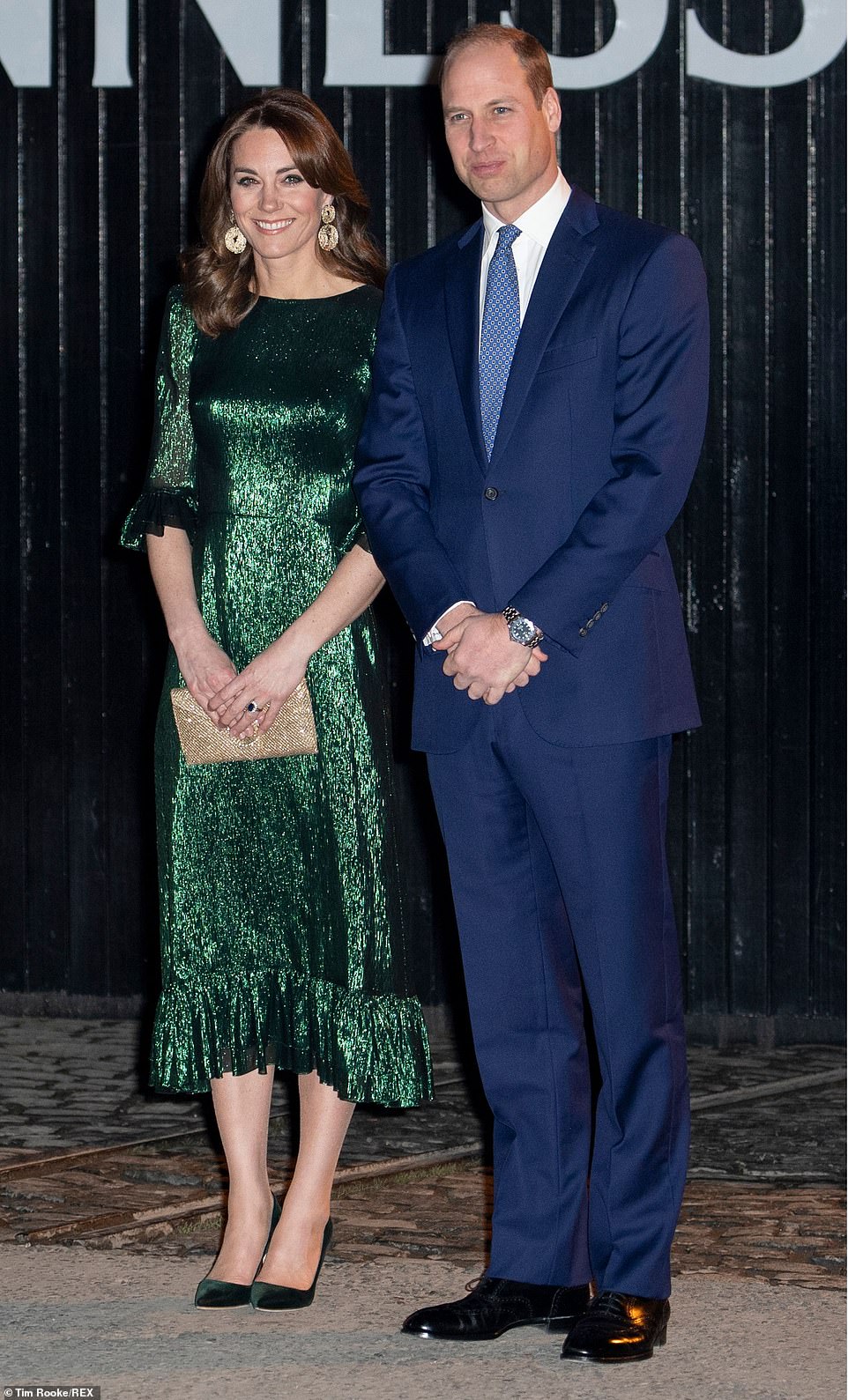 The first official joint artwork captures Kate looking ethereal in a £1,595 glittering emerald gown by trendy designer The Vampire’s Wife, which she first wore during a historic three-day visit to Dublin in March 2020 (pictured)

Members of the public will be able to view the portrait at the 206-year-old Fitzwilliam Museum for an initial period of three years, after which the artwork will be exhibited in other community spaces and galleries around Cambridgeshire.

The painting – which incorporates Cambridge thanks to the background filled with tones and colours of many of the historical stone buildings that are synonymous with the city – will also be loaned to the National Portrait Gallery for a short time in 2023 to mark the Gallery’s reopening.

Whilst on display at the Fitzwilliam, the Cambridgeshire Royal Portrait Fund will continue to work with the museum to ensure the portrait is used as a means of encouraging children and young people of all backgrounds from across the county to take an interest in art in all its forms.

The Fitzwilliam Museum has an international reputation for the quality of its learning and inclusion programmes, working with Early Years providers, local schools and community outreach programmes to maximise impact and enrich the lives of young people and their families.

Artist Jamie Coreth said: ‘It has been the most extraordinary privilege of my life to be chosen to paint this picture. I wanted to show Their Royal Highnesses in a manner where they appeared both relaxed and approachable, as well as elegant and dignified.

‘As it is the first portrait to depict them together, and specifically during their time as The Duke and Duchess of Cambridge, I wanted the image to evoke a feeling of balance between their public and private lives.

‘The piece was commissioned as a gift for the people of Cambridgeshire, and I hope they will enjoy it as much as I have enjoyed creating it.’

Artist Jamie, who graduated from Oxford University in 2010, has previously been commissioned by Princess Anne.

Kate and William’s visit to Cambridgeshire will also champion the work of key local charitable organisations, linked to the couple’s longstanding interests, in particular homelessness and supporting families.

To celebrate the very best of Cambridgeshire, the Duke and Duchess will visit the first ever Cambridgeshire County Day at the July Racecourse, Newmarket.

Comprising of 120 exhibitors from Cambridgeshire businesses, charity, community and public sectors, the couple will visit a number of stalls and meet members of the public.

The County Day will also celebrate The Platinum Jubilee year of the Queen. During the day there will be performances and demonstrations by choirs, bands and dancers as well as showcases from organisations including blue light services, local charities, and voluntary groups.

Kate and William will also see leading small and large businesses who are delivering innovations in areas such as medicine and science.