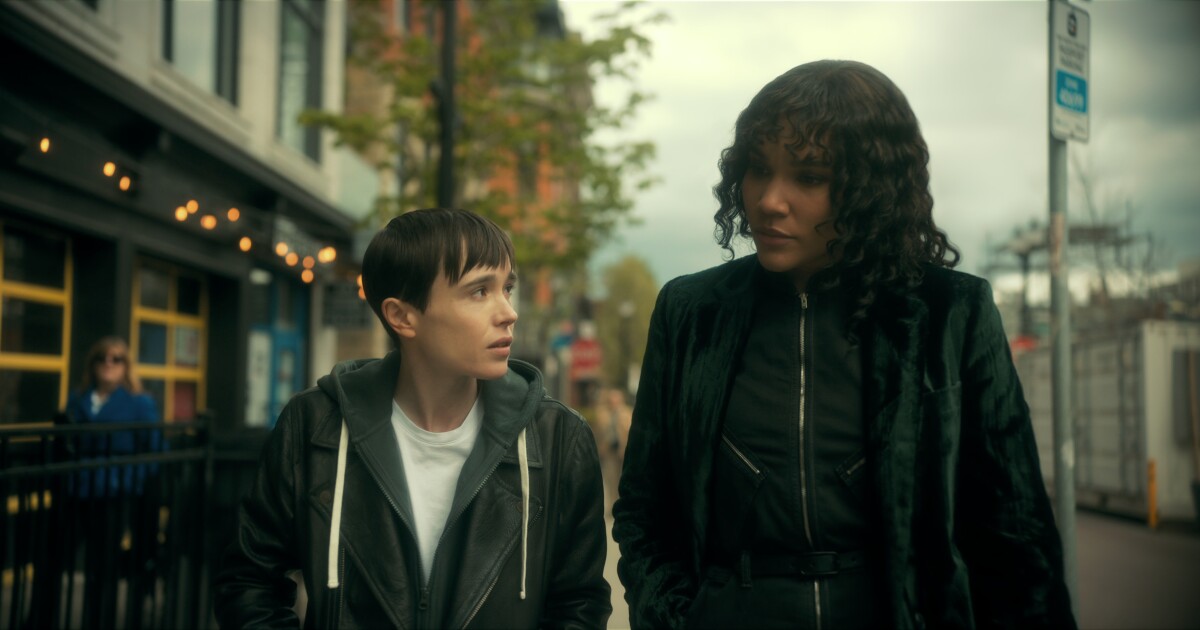 Elliot Page is giving audiences a glimpse into the behind-the-scenes discussions that led to his “Umbrella Academy” character coming out as transgender.

While appearing Tuesday on “Late Night With Seth Meyers,” Page discussed how life has changed for them, personally and professionally, since announcing they are trans in December 2020.

“What I want to focus on right now and has been so extraordinary is the degree of joy that I feel,” Page told Meyers. “I feel a way that I really never thought possible for a long, long time. … But of course, moments can be overwhelming. …

“It’s so unfortunate because it’s like, we’re all on the same team here. Whether you’re trans, nonbinary, gender nonconforming, cis — we all have these expectations and these limits and constraints because of people’s obsession with the binary … It’d be so special for us to all be able to connect and talk about how similar we are in all of our journeys.”

In March, Netflix and Page confirmed that the actor’s sonically gifted “Umbrella Academy” character, Viktor Hargreeves, would use he/him/his pronouns in the upcoming third season of the superhero series.

According to the Oscar-nominee, “Umbrella Academy” showrunner and “wonderful person” Steve Blackman “seemed really excited” to incorporate Page’s trans identity into the plot of Season 3, which premiered Wednesday on Netflix.

Additionally, the show tapped journalist and author Thomas Page McBee — the first trans man to box at New York City’s Madison Square Garden — to consult on Viktor’s character arc. In 2018, McBee released a memoir, “Amateur: A True Story About What Makes a Man,” about his physical and internal journey to Madison Square Garden.

“[McBee’s] book and his work in general are so much about masculinity and what it means and exploring that,” Page said. “So Thomas came on board and helped out, and I feel proud of it and excited for people to see.”

Page also explained how coming out as trans has made him a better performer, person and friend.

“That’s obviously a big component and part of my life and a beautiful thing to experience now,” Page said. “A lot of the time, my life was just trying to move forward, and so getting to embrace the experience as much as I get to now … it’s made me better in so many facets.”

Since issuing a powerful statement about their transition in December 2020, Page has been showered with love and support from friends and colleagues, as well as the larger trans community. They have also been met with negativity as they continue to use their platform to amplify trans voices.

“I reflect on certain very difficult times in my life and certain struggles and obstacles and all that, and ultimately getting through that — I think it really deepens your empathy,” Page told Meyers.