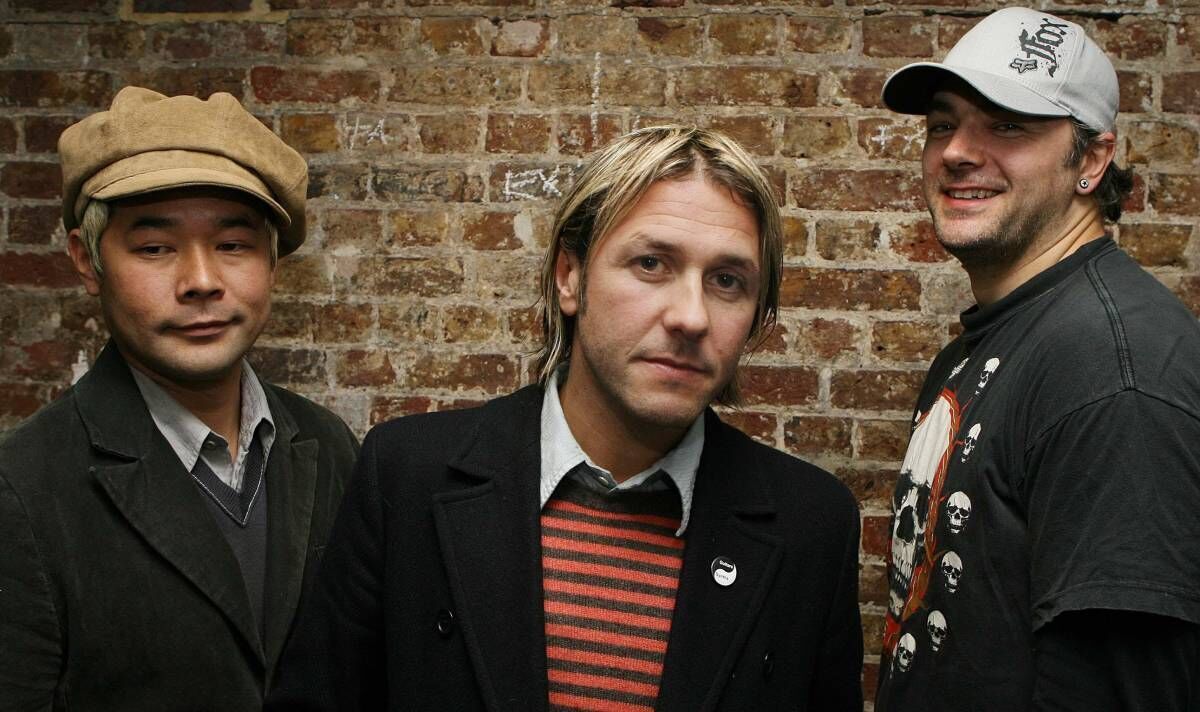 But now he looks me right in the eye as he recalls the night almost exactly 20 years ago when Feeder’s co-founder and original drummer, Jon Lee, took his own life at the age of 33. Less than a year before, Feeder’s third album, Echo Park, had taken them into the Top 5 for the first time, going platinum in the process.

It was also the album that contained their first major hit single, Buck Rogers. Grant shakes his head.

Jon, he says, “was a great personality; a good guy to have around and we worked well together. Just a really fun person to be with. Which is why the whole thing still haunts me.”

“But you never know what’s really going on and what their situations are. He was living in America, and I didn’t know a lot about his life there.”

Grant says the recent death of Foo Fighters drummer, Taylor Hawkins, brought the whole thing back to him.

“We did a few shows together. Dave used to come and watch us sometimes. So it was a massive shock, and I still can’t quite get my head around it now.”

“He had it all going for him. He was in one of the most successful rock bands in the world. He was very popular and positive; you often saw Taylor and Dave together. They were always a pair, weren’t they? So I think he’ll find it very difficult.”

The 50-year-old drummer had suffered a near-fatal heroin overdose in London in 2001 which left him in a coma for two weeks.

When a preliminary urine toxicology report released the day after his death indicated that Hawkins had ten substances in his system at the time of his death, including opioids, benzodiazepines, tricyclic antidepressants and THC, the psychoactive compound in marijuana, the question was whether the overdose had been accidental.

Grant shrugs. “I mean maybe [Taylor] had to take certain things to keep him going [and] just did too much that night. Maybe his body just couldn’t take it on that particular evening. It’s hard to say. I don’t really know.”

The conversation circles back to Lee, who Grant still thinks about often. “I was actually thinking about him this morning, while I was out running. It comes and goes.”

“We made three albums with Jon. But we’ve made a lot more albums since, so we have moved on as a band, but I still think about him a lot because we started the band together.”

Feeder had begun with Newport natives Nicholas and Lee leaving Wales together in the early-90s, both 23, and coming to London to busk.

“We used to do anything from Beatles, the Police, Tears for Fears – a Simon & Garfunkel vibe. In fact, as a joke, we were going to call the band Simon and Grantly’s Uncle.”

They added original compositions and immediately began to get noticed. They formed the short-lived band Raindancer  (still on YouTube) for an obscure TV talent show. He cringes when I mention it.

But it’s notable how close to Feeder they sound. They don’t have the grungey guitars and drums, but the songs are all big pop anthems, stadium-fillers. Exactly the kind of thing Grant has always excelled in writing for Feeder.

“Maybe,” he smiles, “but what about the hoop earring I’m wearing?”

And the big mop of 80s-style curly hair bobbing around on your head, I add.

Grant, 55 this year, no longer has the hair to pull that look off. His once girlishly pretty face is now partially hidden behind a black pepper beard with a hint of salt, and a Steve McQueen-like furrowed brow.

But he retains the cheeky barrow boy charm that helped turn Feeder into one of the most successful British rock groups of the past 25 years – sixteen hit singles, several sell-out tours, and eight Top 10 albums, including their latest, Torpedo, which went Top Five.

Grant Nicholas turns 5 this year but does not feel too old to still create music (Image: PA Images)

As principal songwriter, Grant balances what he calls the band’s “hovercraft guitars” with the simple chemical compounds of what makes a good song.

“I’ve always wanted to be a band that had songs you could hear in 20 years and they’d still sound relevant. Love or hate Oasis, they have songs you know you’re going to hear in 20, 30 years’ time. If you can write a few timeless ones in your career, then I’m happy and I’m still trying to do that.”

Grant lives in north London with Japanese wife Kana and their teenage children. I remark that he has lost his Welsh accent. If he ever had one. Privately educated, he grew up in south Wales, “around Chepstow.” Posh Wales.

“Not really,” he smiles, “because I grew up just over the border, it’s a bit of a mixture of a Welsh Newport accent and a Bristol accent. If I’ve had a few drinks on certain words I sound quite Welsh, but I’ve been in London a long time.”

With the band taking a breather between finishing a UK tour in May and the start of several summer festival appearances, he wishes they could do more. “But availability is a big issue right now. After two years off the road, everyone’s touring at the moment. It’s gone from nothing to everything.”

While Torpedo took Feeder back into charts, it also garnered some of the best reviews they’ve ever had, including a great Daily Express review by Garry Bushell.

“It’s gone full circle in some ways. Maybe it was a frustration of being in lockdown, not being able to play, it brought a bit of attitude to it again.”

Nevertheless, as Grant is the first to acknowledge, the music biz has changed drastically since Feeder started out 30 years ago.

All the bedrocks that helped Feeder become famous no longer exist: MTV doesn’t play music videos, and no one pays attention to radio.

It’s all TikTok now and while once upon a time their brand of matey grunge-lite, powered by Grant’s scruffy golden-boy charm, might have fitted the format, Feeder are too long in the musicianly tooth to be doing with all that now.

Feeder’s next album already recorded and set for release in 2023 (Image: PA Images)

“Radio still plays our old hits, but they’re not interested in anything new. My kids don’t listen to the radio either. It’s all phones and Snapchat.”

“There are artists on the radio that can’t sell out venues and there’s an artist on TikTok I’ve never heard of that’s just sold out two nights at Alexandra Palace. There are no rules anymore.”

With their next album already recorded and set for release in 2023, this summer finds Feeder opening huge outdoor shows for Noel Gallagher and Bryan Adams.

“If you come to our shows, it’s such a diverse audience. You’ve got a mosh pit. Crowd surfers. The diehard Feeder fans that have been there from day one. You’ve got the ones into rock, some students, indie kids. Then you’ve got really young kids.”

He continues: “If it ever feels like we’re trying to do something we’re a bit too old to do, I will definitely stop. But I’ve still got a lot of passion. All of us have. Because there ain’t many like us left in the UK.”