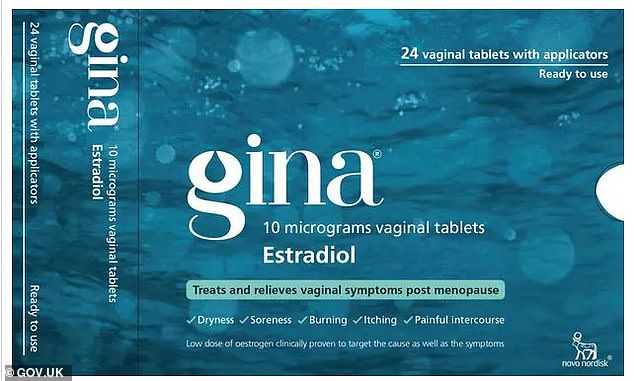 Over-the-counter hormone replacement therapy (HRT) goes on sale in Britain today for the first time ever.

Menopausal women can buy Gina’s 10 microgram tablets at Boots, in what has been hailed as a landmark moment for women’s health.

Other chains will also start stocking the pills later this month.

The medication, which costs roughly £1.25 per tablet, only treats certain side effects of the menopause.

Pills are placed directly into the vagina, where a low dose of oestrogen seeps out.

This helps to relieve vaginal dryness, soreness, itching and burning, factors that can cripple the sex lives of women going through ‘the change’. 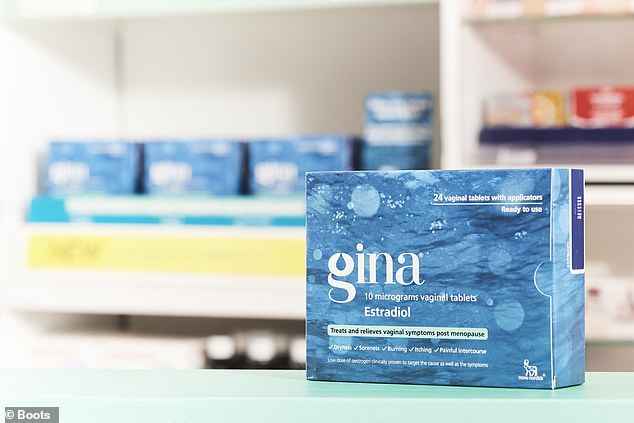 Gina, made by Danish pharmaceutical firm Novo Nordisk, releases estradiol, the type of oestrogen mainly produced by the ovaries, directly into the vaginal tissue 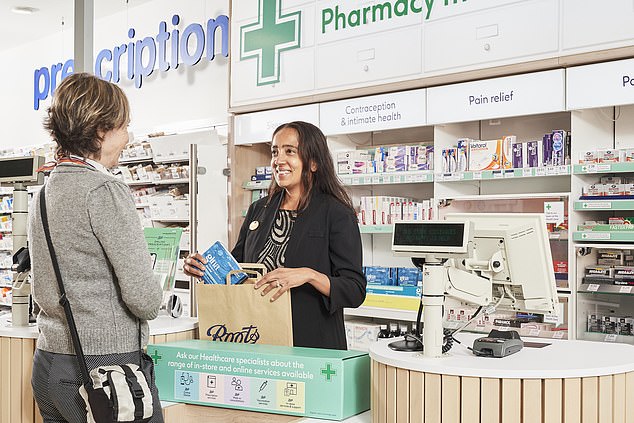 After an initial rollout to 590 stores from September 8, the drug will be stocked at all of Boots 2,247 stores by the end of October

What does it do?

It can alleviate dryness, soreness, itching, burning and uncomfortable sex in women over 50 who have not had period for at least a year.

The drug slowly releases estradiol, the type of oestrogen mainly produced by the ovaries, directly into the vaginal tissue.

This replaces the oestrogen that women’s bodies produce in this area prior to going through menopause.

How do you take it?

In the initial course of treatment women insert one tablet into their vagina daily for a fortnight.

They then transition to a maintenance course of one tablet twice a week.

Does it have any side effects?

The most common side effects reported are abdominal pain, vaginal discharge, vaginal discomfort and vaginal bleeding.

Cases of vaginal bleeding in particular need to be seen by a GP to rule out anything more serious.

Serious side effects are from taking the medication are considered rare.

Is there an increased risk of breast cancer from using Gina?

No. Some forms of HRT that release female sex hormones into the bloodstream, like skin patches and gels, have been linked to a small increased risk of breast cancer.

As the vaginal tablets only release hormones directly into the surrounding tissue very little enters the bloodstream so they are not considered to increase the risk of breast cancer.

All other types of HRT, including different vaginal pills, as well as patches and gels, are still only available under prescription.

Menopause occurs when a woman stops having periods, meaning she is no longer able to get pregnant naturally.

The process — triggered by the ovaries producing less oestrogen — is a natural part of ageing and usually occurs between the ages of 45 and 55.

HRT is one way of treating the symptoms, which eight in 10 women experience. It restores the levels of female hormones, bringing relief to hundreds of thousands of women each year.

Gina, made by Danish pharmaceutical firm Novo Nordisk, releases estradiol, the type of oestrogen mainly produced by the ovaries, directly into the vaginal tissue.

It means very little is absorbed into the bloodstream.

This type of HRT is considered to not increase the risk of breast cancer by the NHS.

For comparison, other forms, that combine oestrogen and progesterone, are linked to a small rise in risk.

Only over-50s who haven’t had a period for a year will be able to get the low-dose medication, under the supervision of pharmacists.

The tablets comes in a pre-loaded applicator that deliver a low dose of oestrogen directly to the vaginal wall that is gradually released into the vaginal tissue, which improves flexibility and elasticity and replenishes moisture.

Users initially place one tablet per day into their vagina for a fortnight, after which point they switch to a maintenance dose of two tablets per week.

After an initial rollout to 590 stores from September 8, the drug will be stocked at all of Boots 2,247 stores by the end of October.

Before purchasing the treatment, patients will have a consultation with a pharmacist, who will ask them a few questions to ensure it is suitable for them. They don’t need to book an appointment for this.

If purchasing on the Boots website, they will have to undergo an online consultation.

Gina will still be available to patients with an NHS prescription for it, for the price of the prescription or free to those who don’t pay for prescriptions.

While the over-the-counter cost will be higher than a prescription, some may choose to buy directly from Boots if they are struggling to get a GP appointment.

The most common side effects reported after taking the tablets are abdominal pain, vaginal discharge, vaginal discomfort and vaginal bleeding.

Anne Higgins, pharmacy director at Boots, said: ‘As a pharmacy medicine, Gina is more accessible to patients as they no longer need a prescription from their GP.

‘Today is another important milestone in women’s health.’

It is hoped that the move will lower the demand at GP practices — with patients facing long waits to get through on phones and for appointments — by allowing women to obtain HRT without booking an appointment.

Bina Mehta, a pharmacist at Boots, said: ‘Menopause is a natural process and everyone’s experience is different.

‘I encourage those who are going through any stage of the menopause to come and speak to their local pharmacist for personalised advice and recommendations alongside guidance, where appropriate, on how to optimise HRT treatments.’

It follows a string of other drugs being made available over-the-counter, including Viagra in 2018 and contraceptive pills last July.

Thousands of women struggled to access vital HRT medication earlier this summer, amid a national shortage.

The crisis saw women meet in carparks to get their regular HRT products by swapping with others, while some were forced to pay over the odds online to source HRT from the black market.