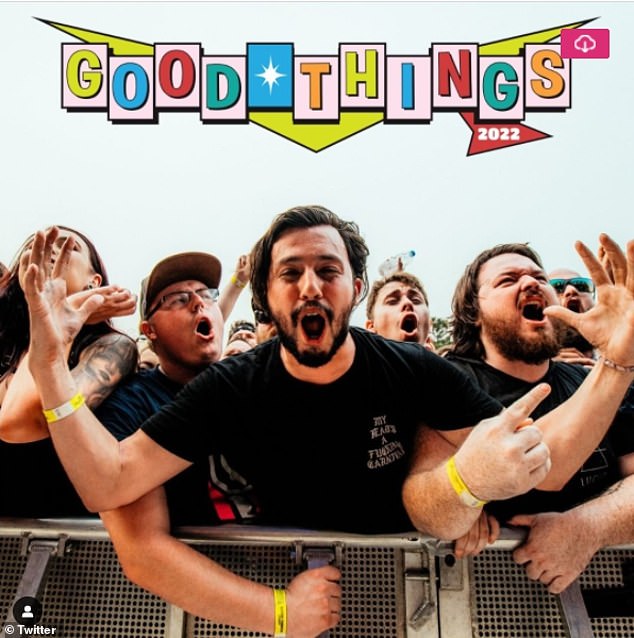 Fuming festivalgoers have lost hundreds of dollars after a rush to buy tickets for the Good Things festival caused the hosting website to crash.

Good Things is a rock, punk and emo music festival that will take place in Sydney, Melbourne and Brisbane in early December.

Tickets for the event became available on hosting website Oztix on Tuesday at 10am.

But fans who purchased their tickets early during the rush claim they didn’t receive a ticket as the site crashed but their money was still taken.

Those who had lost money took to social media to express their anger and frustration.

‘Oztix is the worst. Tried ordering Good Things festival tickets and got told over 8 times that the transaction timed out and failed. So I kept trying,’ wrote one woman.

‘Just checked my account and all the money is coming out, but still no confirmation or tickets. So do I have 0 tickets or 16?’

One festivalgoer claimed they had lost $1,400 and showed a picture of the transaction in her bank account for tickets.

‘@goodthingsfest / @oztix have put a HOLD on my account for all the failed ticket buying attempts!’ she said.

Another tweeted they had lost $1,200 after he tried to buy tickets three times.

A fourth shared a picture of the amount deducted from her bank account for Good Things tickets and an error message on the Oztix website.

‘Hey @oztix, I attempted to buy two tickets to Good Things Festival 2022 in Melbourne this morning,’ she wrote.

‘I got this message saying that the purchase had failed but the money has been taken from my bank account. Help!’ 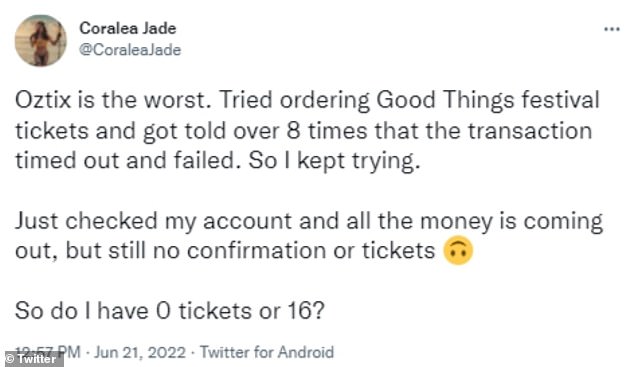 One woman uploaded a picture of her bank statements which show purchases for Good Things tickets. She claimed she had lost $1400

One woman claimed on Facebook that she had lost $2,800 after trying to buy tickets.

‘Seems to be standard practice with Oztix. My credit card has been charged seven times, I am yet to receive any confirmation or tickets. I have no idea if I have 0 tickets or 14 tickets now,’ she stated.

‘Oztix have turned their phones off and aren’t replying to emails and I’m $2,800 out of pocket.’

Another wrote: ‘Seems like this is happening to a lot of us. Buying tickets to Good Things Festival it times out but still takes our money. I’m assuming that means we will get tickets emailed or posted at some point. F***ing annoying.’

‘I tried for two hours to get through for tickets and it kept timing out. Little did I know, it took money out of our bank account seven times which I’m now trying madly to get back somehow … and still no tickets,’ added a festivalgoer. 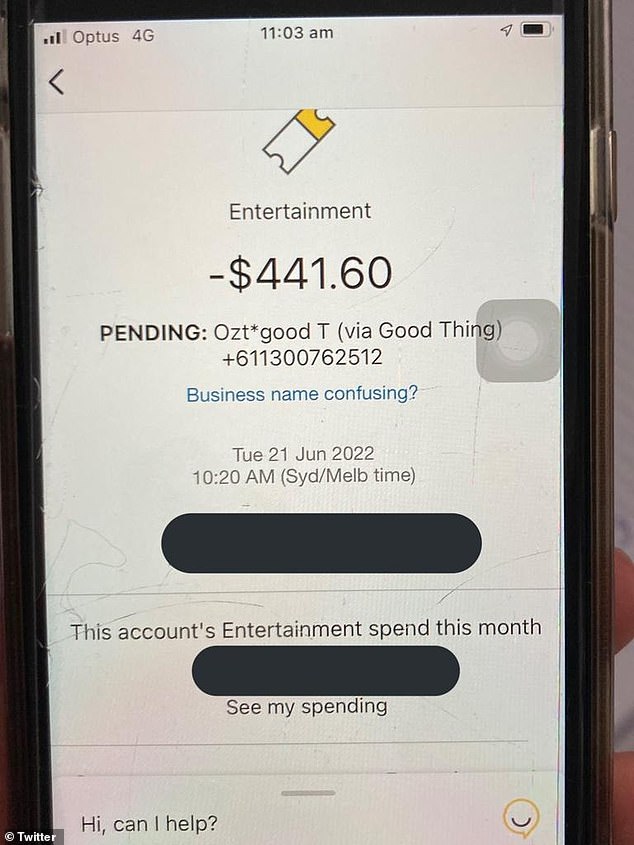 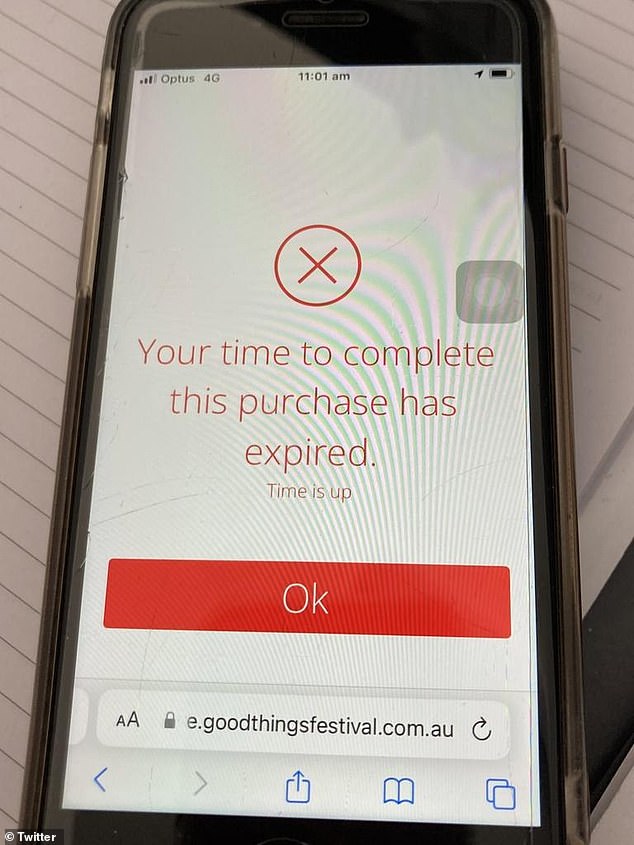 ‘Good Things Festival would like to acknowledge the issues surrounding our Presale this morning. Oztix our ticketing partner apologise unreservedly to all fans affected,’ the statement read.

‘We are absolutely blown away by the demand for our festival and can’t wait to see you all in the pit in December.’

They then included a separate statement from Oztix who blamed ‘unprecedented demand for tickets’ for the purchase problems.

‘The ticketing system functioned as expected, however the processing of payments saw major delays in response time between the system, payment gateway, banks and back again.’

‘This delay in receiving a confirmation from the bank meant that some customers had multiple attempts at buying tickets and were charged multiple times.’

Oztix reassured those who had bought tickets that order receipts would be sent to them and those who made multiple purchases would receive a refund and a refund receipt Tuesday afternoon.

‘We will advice once this process is complete and if you have any further queries at that time, then please contact us and we will assist you,’ the statement concluded. 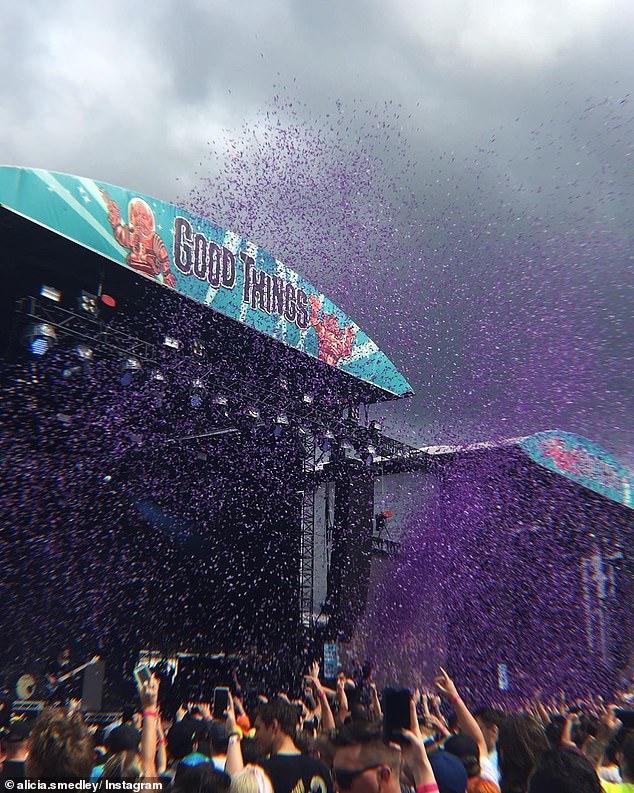 The 2022 Good Things festival will be headlined by Bring Me the Horizon and Deftones.

Other bands playing include The Amity Affliction, Gojira, NOFX and TISM.

The festival is being held during the first weekend of December in Melbourne, Sydney and Brisbane.

Good Things had its inaugural festival in Australia in 2018.