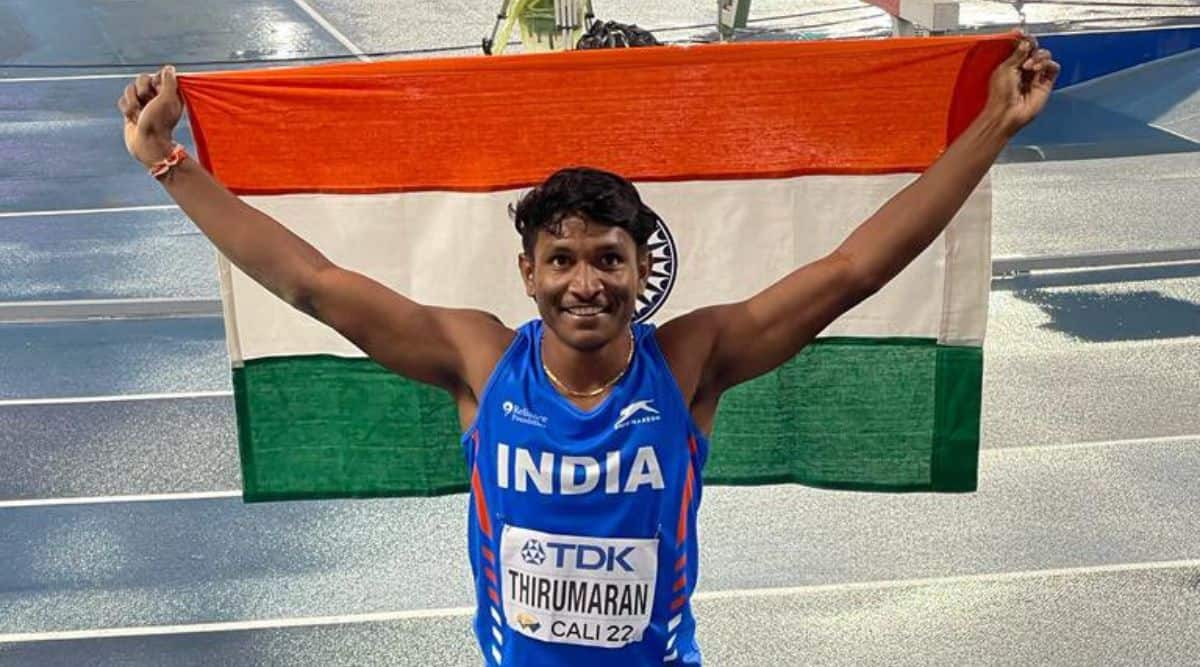 Triple jumper Selva P hasn’t been home in the last six months as he didn’t want to risk disturbing his training routine. The Madurai resident was single-mindedly focused on realising his dream of finishing on the podium at the 2022 U20 World Championships in Cali, Colombia.

His determination paid off on Friday as he won India’s first junior Worlds medal in triple jump after finishing second with a best effort of 16.15m. Selva is as much relieved as he is elated about winning the medal because less than a month back, he was saddled with crippling self-doubt after recording just 15.30m in the final trials conducted by the federation.

“My coach and family were really disappointed with that performance. I had lost hope. My preparations for the junior Worlds began six months ago but in the last month, everything went haywire. I just couldn’t get the distance I desired. I was left without answers,” Selva tells The Indian Express after his podium finish.

Luckily for 17-year-old Selva, his coach, two-time World Championship silver medallist triple jumper Yoandri Betanzos, had a solution. He has been working with Selva and other top jumpers, including Asian Games champion Arpinder Singh, for about six months now at JSW’s facilities in Vijayanagar.

The solution may appear simple but a tweak in technique just weeks before a major competition would leave even seasoned athletes sweating. But Selva knew there wasn’t a Plan B. “It is very difficult to make changes to your technique. It is like changing a habit and it requires time. But I wanted to win this medal no matter what. So I just gave it everything in my training and was able to make the correction just in time,” he says.

Coach Betanzos also made the youngster study five-time World and two-time Olympic Champion Christian Taylor’s videos. “I have watched and observed his approach in the run-up. It helped me a lot,” says Selva.

At the U20 Worlds, Selva reached the finals with a 15.99m jump, finishing third in the qualification round. During the medal round, Selva showed he meant business as he cleared the 16m mark in his first four attempts, landing the silver with his third try. He still finished quite some distance behind gold medallist Jamaican Jaydon Hibbert, who had a championship record-breaking leap of 17.27m. The Indian finished just 2cm ahead of Estonia’s bronze medallist Viktor Mozorov.

Back home, Selva’s family ended their 15-day fast for his success in Colombia. Father Thirumaran, who runs a small water purifying unit in Madurai, was up all night as he didn’t want to miss his son’s event. He broke down at least three times while talking about his son’s triumph.

“My phone has 200 messages already (11 am) and the calls haven’t stopped coming. I don’t have words to express my joy. For the past 15 days, we have been fasting and praying for his victory,” says Thirumaran.

The family is now eagerly awaiting Selva’s return to celebrate the achievement. So is Selva. “It’s been a long time since I’ve been home. I miss home food a lot. I just can’t wait to have mutton biryani prepared by my mum,” says the youngster.