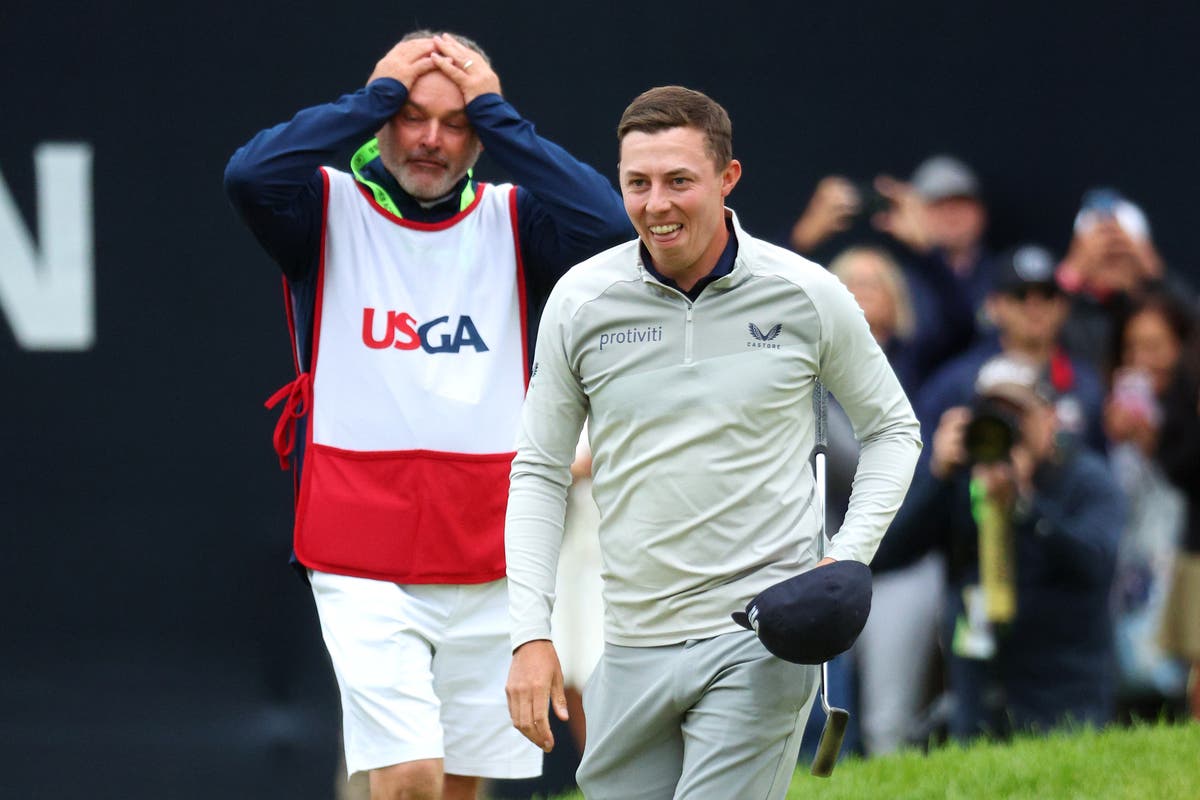 “I feel like I’m the same deal,” he said. “Not expected to do well, not expected to succeed. I’ve won a Major.” And no one can take that away from him.

Fitzpatrick has long aspired to win one of golf’s big four, to the extent that he allowed himself to imagine what it would be like to be in the warm glow of its aftermath.

He had particularly enjoyed playing a round with Shane Lowry just months after the Irishman had broken his own Majors duck. “He was telling me a story about one of his mates giving him abuse or that he wasn’t playing very well or something,” recalled Fitzpatrick. “And he just said it didn’t really matter, ‘because I just thought, I’ve won a Major’. I’ll be using that one a lot for when things aren’t going my way.”

Sunday’s final round at Brookline might be one he returns to a lot in the coming weeks, months and years. He hit 17 of 18 greens in regulation and the greatest of them all at the Majors, Jack Nicklaus, said his shot out of the bunker on the 18th was “one of the greatest iron shots under pressure that I’ve ever seen”. It was enough for Nicklaus to pick up the phone and ring Fitzpatrick to immediately congratulate him.

At Brookline, the course where he had won the US Amateur title in 2013, he kept coming back to Sheffield. It was a course akin to Hallamshire: windy, tight, really small greens.

And he had home comforts with him, too. Dad Russell, whose son aptly won on Father’s Day, and mum Sue were nervously hugging every green, along with his brother, Alex.

I recently met a sports agent, who missed out on signing Fitzpatrick in the infancy of his career. He said he could not begrudge the parents for not going with him. “They’re such a lovely family, they just wanted what was best for him,” he said.

It was supposedly Sue who decided that they stay with the same host family, the Fultons, and bunk in the same rooms they had done for those amateur days nine years previously.

The family are close. Between them, they talked at length about the merits of the big money on offer from LIV Golf. With Matt already established on the tours either side of the Atlantic, it seemed an easy choice to stay put. For Alex and the offer of a seven-figure sum, it was infinitely harder when new to the professional ranks. He eventually sided with the status quo, much to his older sibling’s delight.

Alex has a propensity to keep his brother level, likening his putting to that of Edward Scissorhands after a few went begging amid his novel approach of keeping the flagstick in.

Fitzpatrick and others talked of the hard work he had put in to get to this point, as players often do in such occasions. In this case, he appears to have genuinely left no stone unturned.

He had heard the barbs in the past that he did not have enough in today’s power game to match the bigger hitters, so he sought to change that. He turned to the biomechanist Sasho MacKenzie whose method, The Stack, is based around a practice stick with added weight. Sticking diligently with the method he practises every day, his average swing speed went from 112mph to 119mph and, crucially, the distance went from 287.9 yards in 2019 to 298.1 this year.

It is one of a small number of stats that he pores over. He is more data-driven than most people and has tracked every shot he has played over the past decade. And, sticking to the numbers, he is ranked two in the world for scoring average this season (69.056) and strokes gained total (2.036).

Adding Billy Foster to his bag was also huge. His experience, dry sense of humour and ability to double up as a psychologist have clearly worked wonders. One only had to look at the emotional scenes on the 18th green to see the bond between the pair.

Foster had caddied for some of the European greats, from Seve Ballesteros to Lee Westwood, and described Fitzpatrick’s final 18 holes as “the best ball-striking round I’ve seen”.

The next number Fitzpatrick had his sights set on is six, the number of Majors achieved by fellow Englishman Nick Faldo. Such a target was partly said in jest, as was the joke at his post-win celebrations that he needed to get to bed so that he was up bright to practice the following morning, but then only partly.

Inside Qatar World Cup resort for footballers and WAGS with £3,500-a-night rooms