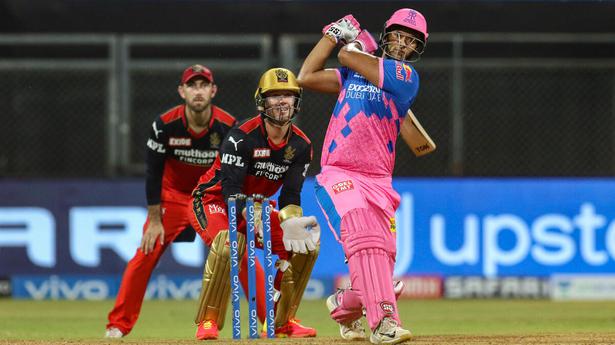 Devdutt Padikkal came of age with a brilliant unbeaten 52-ball 101 to guide Royal Challengers Bangalore (RCB) to a 10-wicket win over Rajasthan Royals (RR) at the Wankhede Stadium in Mumbai on Thursday.

Padikkal’s masterclass took RCB to the top of the points table with a fourth straight win. RR — hampered by the unavailability of key players Jofra Archer, Ben Stokes and Liam Livingstone — slumped to a third loss in four matches.

The 20-year-old Padikkal, an immensely talented youngster, made a big impression with his maiden IPL century. That Padikkal only recently recovered from COVID-19 made his performance all the more special.

Padikkal scored his runs at a rapid rate, but there were no wild slogs. The southpaw played late, and used pure timing to pierce the gaps. When the bowlers pitched it up, Padikkal brought the bat down with a clean swing, sending the ball far into the stands. The Karnataka cricketer scored the fastest IPL century for an uncapped player, edging out previous record holder Paul Valthaty (52 balls, KXIP v CSK in 2011) by one ball.

Chasing 178, openers Padikkal and Virat Kohli (72 n.o.) made short work of the target. During the course of his knock, Kohli became the first cricketer to cross 6,000 runs in the IPL.

After being put in, RR lost wickets early, but recovered well to post a healthy score. Joss Buttler (8), Manan Vohra (7) and David Miller (0) were dismissed cheaply, with Mohammed Siraj and Kyle Jamieson doing the damage. Siraj was impressive once again, taking out Miller with a sharp, fast yorker.

Captain Sanju Samson blasted off-spinner Washington Sundar for a huge six, but chipped the next ball to midwicket to fall for 21. From 43 for four, RR came back into contention through good knocks from Shivam Dube (46, 32b, 5×4, 2×6), Riyan Parag (25, 16b, 4×4) and Rahul Tewatia (40, 23b, 4×4, 2×6). Dube and Parag put on an attacking 66-run fifth-wicket stand, shifting the initiative back to RR. Pacer Harshal Patel broke the dangerous partnership with a slower ball, which Parag tried to scoop to fine leg. A top edge, however, landed in the hands of deep third-man. Dube was sent back by a good diving catch by Glenn Maxwell at long-on. Tewatia was deceived by a cutter from Siraj. Harshal and Siraj finished with three wickets each. Harshal retained his spot as the highest wicket-taker of the tournament (12 wickets).

Final rites of COVID victims should be performed with full respect,...