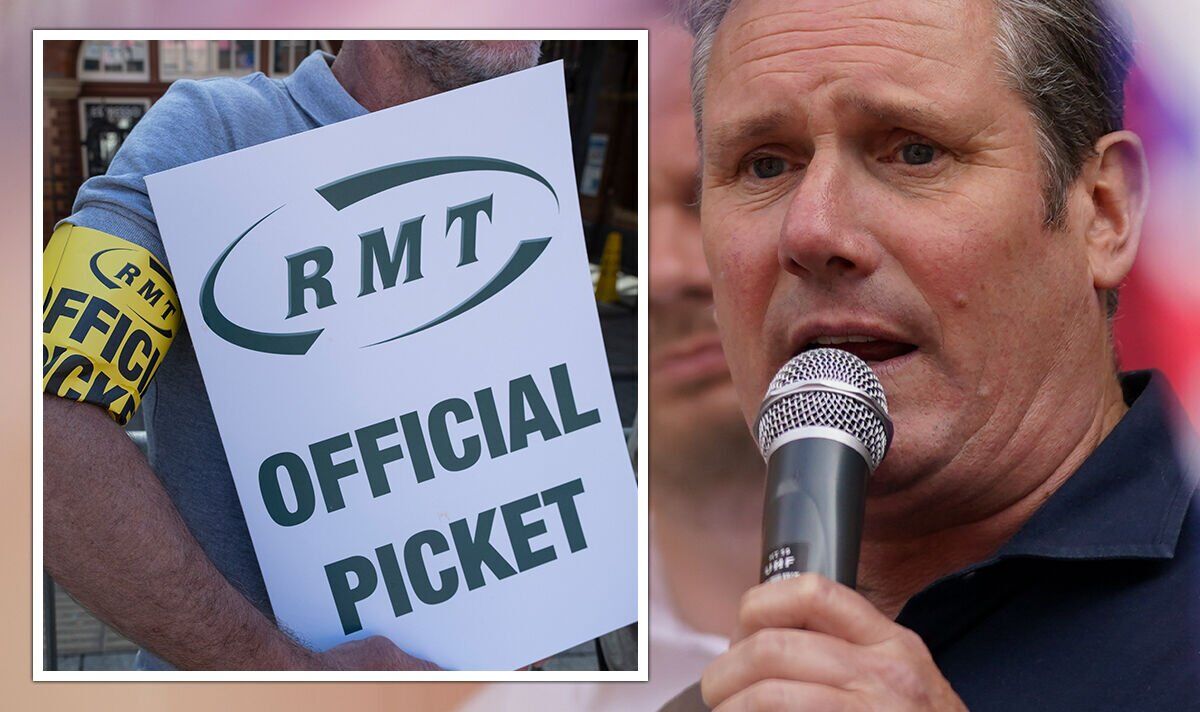 The brewing rebellion comes as a new dossier reveals as many as 16 Labour MPs have received donations from the National Union of Rail, Maritime and Transport Workers (RMT) responsible for grinding the country to a halt today. And millions of pounds have also been given to Labour MPs by other unions considering strike action in the coming weeks.

Sir Keir last night threatened to punish Labour MPs who joined the picket lines as he sought to paint himself as on the side of commuters impacted by the industrial action.

“We do not want to see these strikes to go ahead with the resulting disruption to the public,” he said in an email to colleagues.

“We also must show leadership and to that end, please be reminded that frontbenchers including parliamentary private secretaries [PPSs] should not be on picket lines.”

But despite his warning, three members of Sir Keir’s frontbencher have joined striking rail workers.

Sir Keir Starmer is facing a rebellion over the train strikes (Image: PA)

PPSs Kate Osborne and Paula Barker were pictured joining those who have walked out, while Labour whip Navendu Mishra – who is meant to be tasked with discipline within the party – said he was “proud” as a trade unionist to join the strike.

The MPs will now be expected to resign or face being sacked by Sir Keir.

The Conservatives have criticised the Opposition for failing to be more vocal in condemning the strikes, accusing them of colluding with the trade unions.

Last week 13 Labour MPs voted against the motion in Parliament condemning the RMT’s strike action and recognising the impact it will have on students taking exams, people trying to get to work, and the wider economy.

The rest of the Labour Party abstained. In contrast, 275 Conservatives voted to condemn the strike action.

Despite Sir Keir publicly attempting to distance himself from the strikes, he is understood to have privately expressed support for the action last month.

POLL: Do you support unions in rail strikes bringing UK to a halt?

Labour frontbenchers have shown their support for strikes on social media (Image: TWITTER)

Those involved will be expected to resign after ignoring Sir Keir Starmer’s orders (Image: TWITTER)

Leaked minutes from a meeting of Labour’s ruling body, the National Executive Committee, in May show: “On possible action on the railways he [Keir] said it was wrong for the Government to restrict the right to strike.”

Labour’s response to the strikes has once again thrown Labour’s links and support for the union barons into the spotlight.

Unions are the biggest donors to the party.

Over the last decade, the RMT has given Labour more than £1million including £239,325 to the Central Labour Party.

Among those to receive donations from the RMT was Labour’s deputy leader Angela Rayner who received £185,657 between November 2014 and February 2020 – unions include RMT, Unite, GMB, CWU and Unison.

Meanwhile, Starmer has not received RMT donations but has been a major recipient of funds from other unions now considering strike action.

The Electoral Commission registered 15 donations at the value of £81,455 to Starmer between January 2020 and April 2020 – unions include Unison, which is planning a nurses strike, the shopworkers union USDAW and Community.

Unite the Union, which is involved in the rail strike, made four donations and donations in kind to Ms Haigh, which were registered in July 2017.

“Network Rail are proposing some significant cuts because the Department for Transport, the Government, are insisting on serious cuts to their budget and it is causing concerns about safety.”

Shadow health secretary Wes Streeting said he would vote to strike if he were a member of the RMT.