Lesbian couple discover that they could be half-sisters 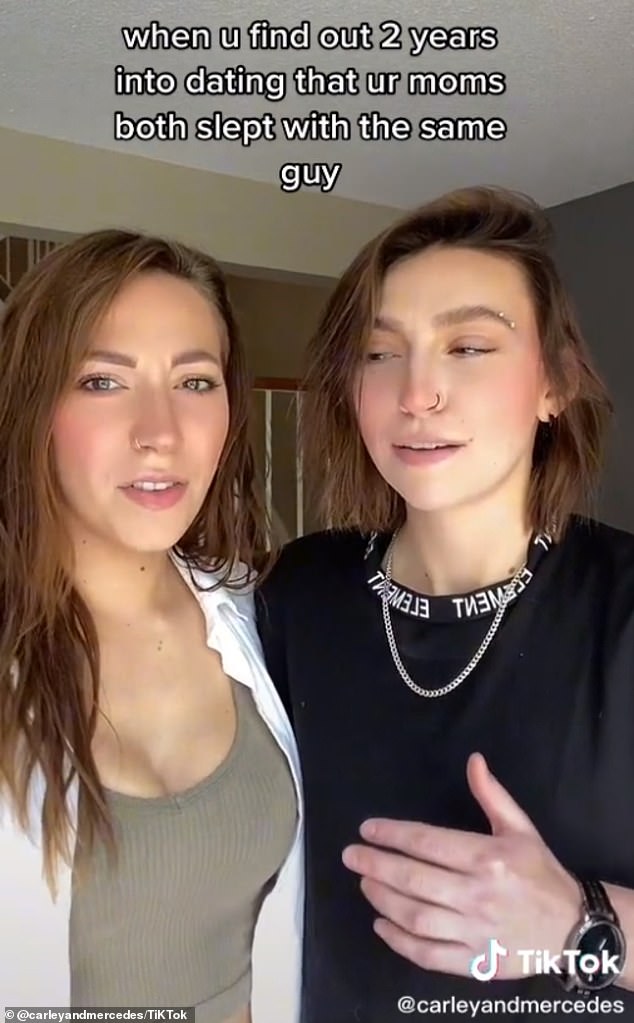 A lesbian couple who have an uncanny resemblance have revealed they may actually be half-sisters, but they’re still considering staying together even if they’re related.

Carley Gonschior and Mercedes Stewart, from Canada, have been dating for the past two years and run the OnlyFans account @notyouraveragesister. They shared their shocking discovery on TikTok, claiming they might have the same father.

‘When u find out 2 years into dating that ur moms both slept with the same guy,’ they wrote in the on-screen text of the now-viral video, which has been viewed more than 6.9 million times.

‘Should we take a DNA test?’ they asked in the caption.

Carley Gonschior and Mercedes Stewart, a lesbian couple from Canada, have gone viral on TikTok after claiming they may be half-sisters 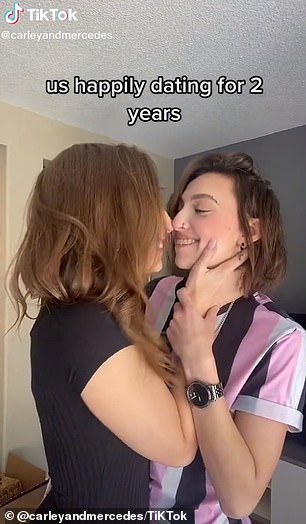 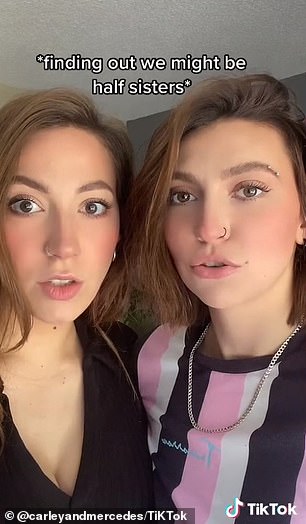 According to the duo, they recently discovered their mothers slept with the same man, and they may share a father

Thousands of people have taken to the comments to share their opinions, with many noting that Carley and Mercedes do look eerily similar.

One person commented: ‘That could explain why you two look like sisters….’

‘When I first saw u I thought u were sisters,’ another agreed, while someone else added: ‘I HAVE ALWAYS SAID Y’ALL LOOK RELATED.’

Others insisted that they take a DNA test to find out if they are half-sisters.

Thousands of people have taken to the comments to share their opinions, with many noting that they do look eerily similar. The couple claimed they are ‘scared’ to take a DNA test

There were also some skeptics who had a hard time believing their story was real.

‘I can’t tell if this is real or just a TikTok joke…?’ one person admitted, while another added: ‘I feel like this is a joke but [you] do [for real] look exactly the same.’

Carley and Mercedes also sparked a debate about whether they have to break up if it turns out they are half-sisters when they asked: ‘If we’re actually related is it wrong to stay together?’

‘I personally probably wouldn’t but if the love is real and it’s something you can look past, work for it,’ one person wrote. 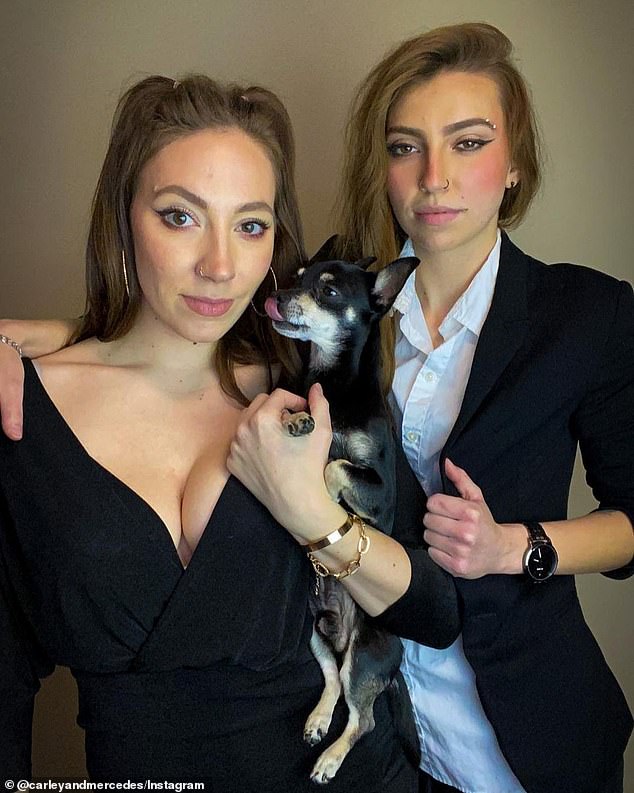 Carley and Mercedes have more than 580,000 followers on TikTok 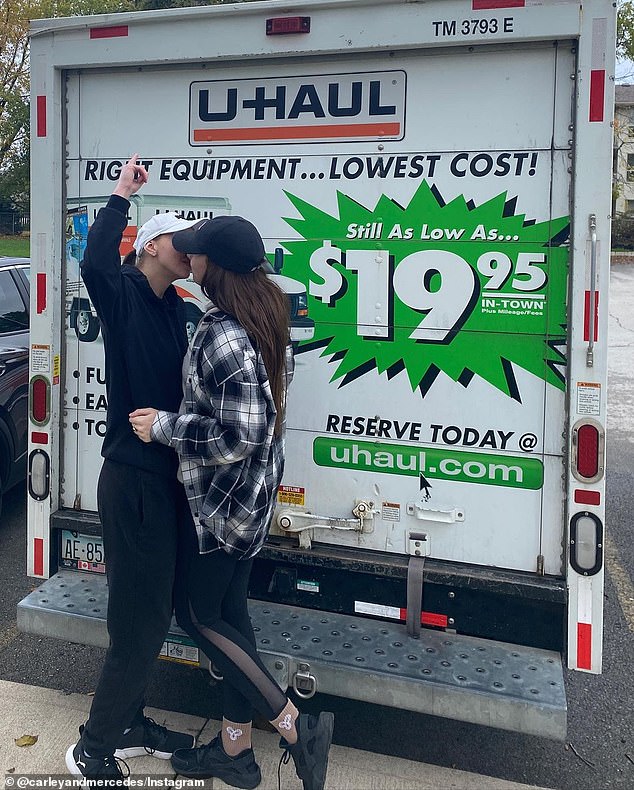 The Toronto-based couple moved in together in November 2021 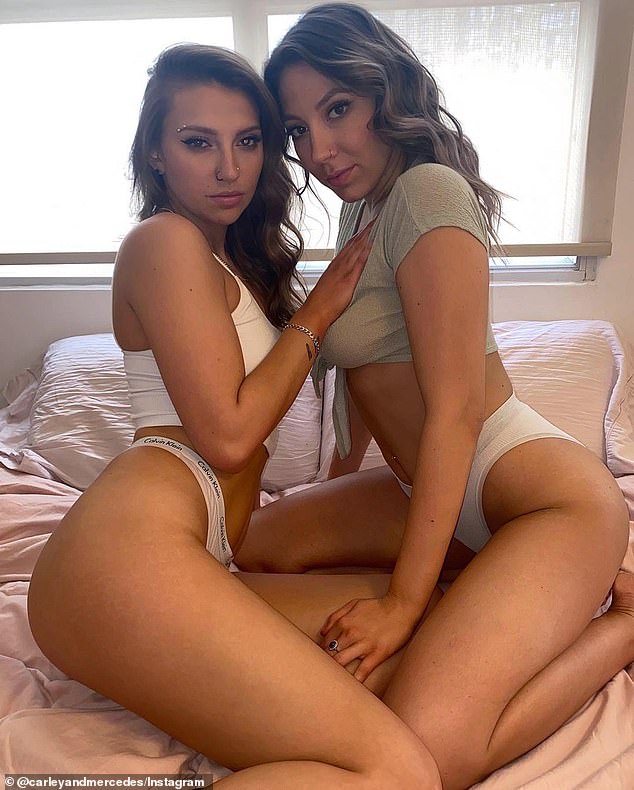 ‘They [can’t] procreate so it wouldn’t be harmful to any child they have should they choose to,’ someone else noted. ‘So I personally see nothing wrong with it. You didn’t know.’

Other commenters were horrified and pointed out that it’s incest and illegal in most U.S. states and Canada, regardless if they can’t have children together.

However, Carley and Mercedes didn’t seem to share their horror, and they continued to film cheeky videos that made light of their alleged situation.

‘Us happy in our 2 year relationship,’ they wrote in a follow-up video, which showed them smiling together. ‘Finding out we might be half-sisters,’ they added, looking shocked. 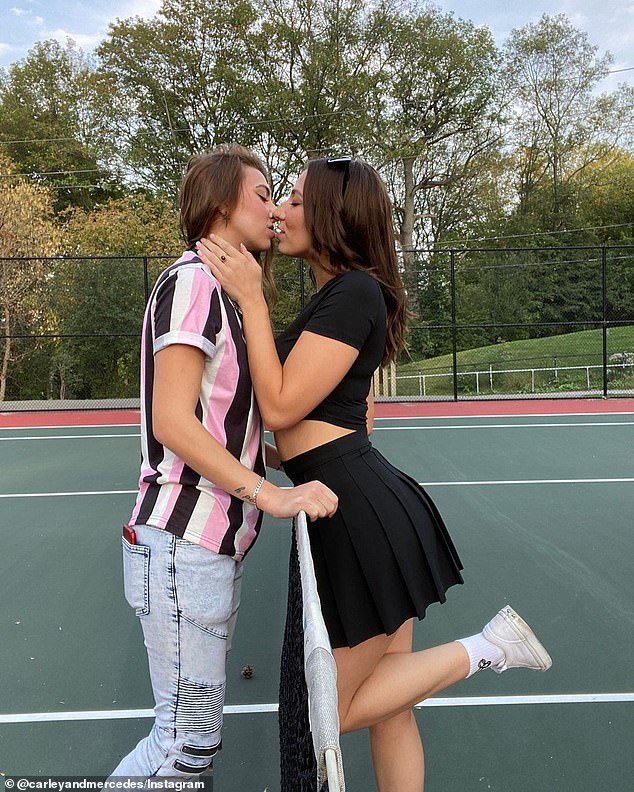 Some argued they could continue dating because they can’t have children together, while other horrified users pointed out it is incest and illegal

‘Siblings or dating plot twist.. maybe both???’ they wrote in the caption.

In another video that was posted on Monday, they claimed that they have ordered DNA tests and are waiting for them to arrive.

‘When they come, you have to spit in the tube and send it off. So it’s like a few-week process,’ Carley explained.

Mercedes noted that they were confused about how the tests work and were worried they could get inaccurate test results if they kiss.

‘If we kiss before we do the test, is that going to affect the DNA results because our salivas will be in each other’s mouths?’ she asked. 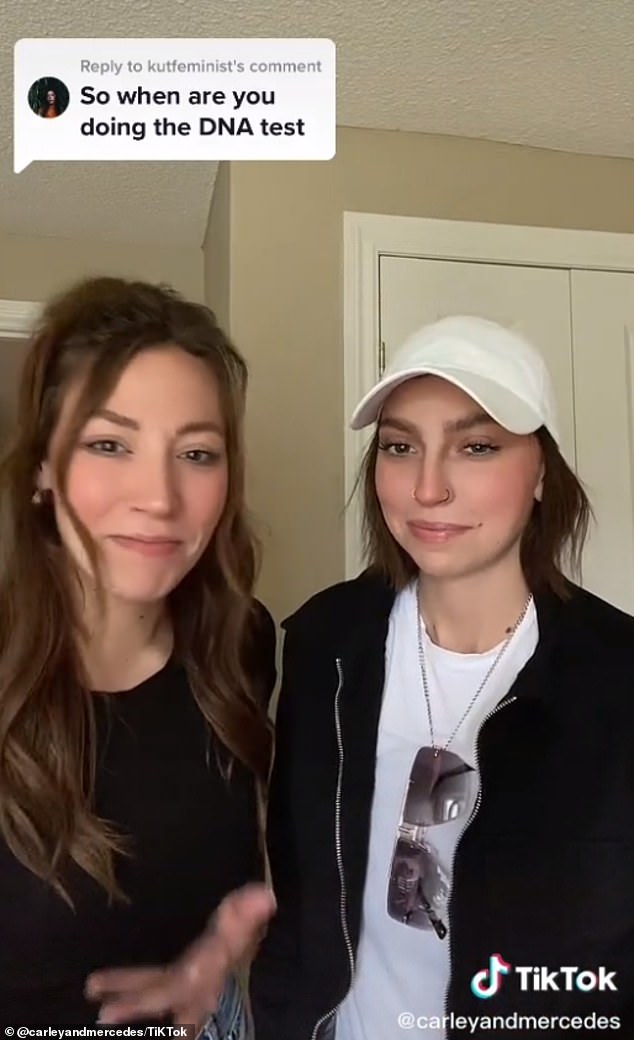 In another video that was posted on Monday, they claimed that they have ordered DNA tests and are waiting for them to arrive 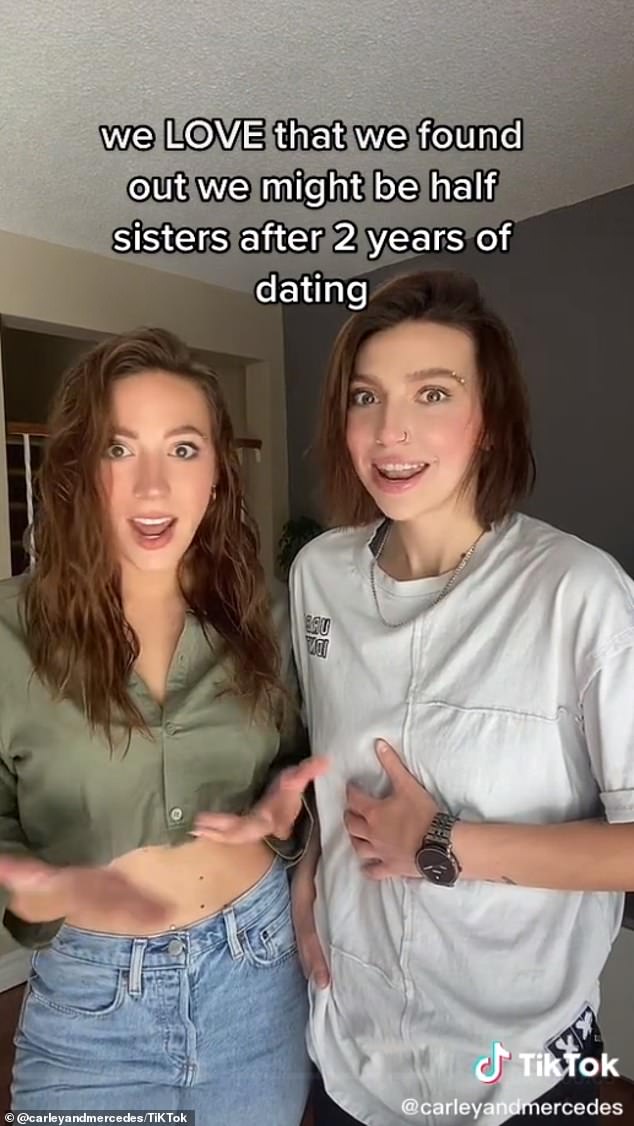 Carley and Mercedes didn’t seem to be too upset about they discovery, and they continued to film cheeky videos that made light of their alleged situation

Carley added that they don’t know if should refrain from kissing for 24 hours to make sure their DNA isn’t ‘in each other’s mouths.’

In the couple’s most recent video, they seemed to clap back at the notion that they are enjoying the possibility that they might be related.

‘We LOVE that we found out we might be half-sisters after 2 years of dating,’ they wrote in the lip-syncing clip.

‘Oh my gosh, I just love your matching dresses,’ they lip-synced. ‘Really? No!’

University student, 20, found dead in river ran off from parents in a tragic prank