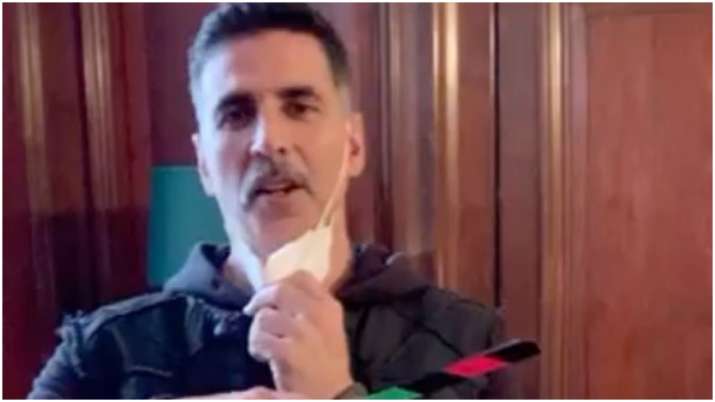 Akshay Kumar, on Thursday (August 20), shared a video from the sets of his upcoming film Bell Bottom. On August 6, the film’s team was spotted at the airport, headed to the UK. Bell Bottom is the first major Bollywood film to be shot abroad during the novel coronavirus crisis. In an Instagram post, Akshay Kumar wrote, “lights, Camera, Mask On and Action Following all the new norms and filming on for #BellBottom! It’s a difficult time but work has to go on. Need your love and luck”.

Meanwhile, Lara Dutta posted on Twitter, “And it begins!! I’m claiming one for the girls!. As a 42 year old female actor, in this Covid period, it feels AMAZING to be the first to be back on set of a Bollywood film!Thankyou @poojafilms for creating a safe environment for us Folded hands. #BellBottom”.

And it begins!! I’m claiming one for the girls! 💪🏼. As a 42 year old female actor, in this Covid period, it feels AMAZING to be the first to be back on set of a Bollywood film!Thankyou @poojafilms for creating a safe environment for us 🙏. #BellBottom @akshaykumar @ranjit_tiwari https://t.co/QWffpR5CK7

Akshay is among the first actors to resume shooting amid the pandemic and has said is not possible to live in fear. He said in one of his recent interviews on whether he was afraid: “Of course, I was, but for how long can you live in fear? Initially, when the pandemic started, very little was known about the virus – the way it affects a person. So, there was a lot of fear. Now, with time, we know more and also that it’s possible to beat it if we’ve a good immune system. Hence, I decided to get back to work taking all the precautions, not just for me but the entire unit.”

Bell Bottom is an espionage thriller and will be set in the 1980s. The film is about one of India’s forgotten heroes. It will star Akshay and Vaani Kapoor as its lead pair with Huma and Lara in prominent roles. Directed by Ranjit M Tewari and written by Aseem Arrora and Parveez Shaikh, the film is being produced by Vashu Bhagnani, Jackky Bhagnani, Deepshikha Deshmukh, Monisha Advani, Madhu Bhojwani and Nikkhil Advani under the banner of Pooja Entertainment, in association with Emmay Entertainment.

Ayushmann Khurrana amazed that he never shot in hometown Chandigarh before

Eczema treatment: Six simple things you can do to manage skin discomfort

Months of Eviction Uncertainty Are Taking a Toll on Millions of...

PUBG fanatics pray for VPN solution or a desi version

RBI launches latest round of quarterly survey of manufacturing sector

COVID-19 Is Transmitted Through Aerosols. We Have Enough Evidence, Now It...

BJP to protest against govt. today

Are hotels closing in Northern Ireland?