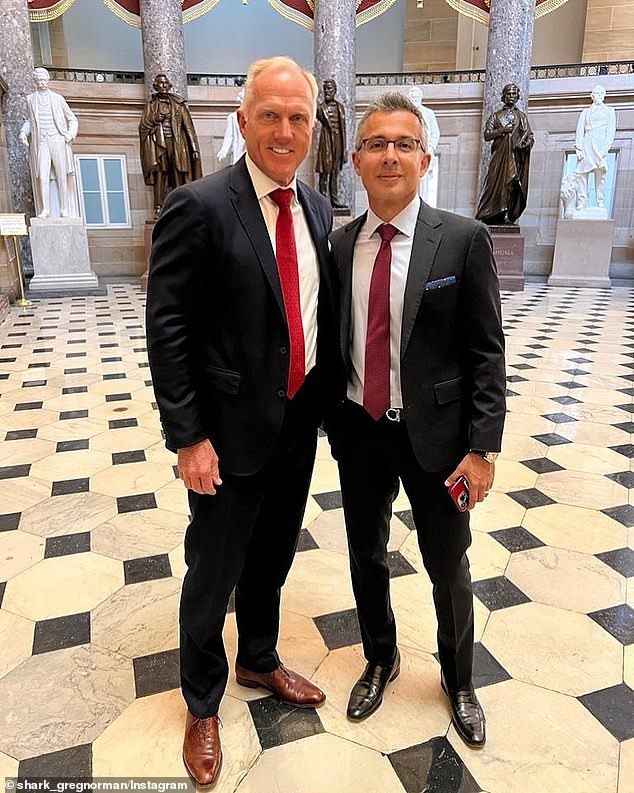 LIV Golf chief executive Greg Norman climbed Capitol Hill this week seeking lawmakers’ support for the upstart tour amid its ongoing antitrust lawsuit against its PGA rivals, but was instead accused of spreading propaganda for his Saudi Arabian backers.

Norman faced questions over LIV Golf’s financing, which comes from Saudi Arabia’s Public Investment Fund, as legislators from both parties accused him of wasting Congress’ time on a business dispute between the tours. LIV Golf and seven of its players recently sued the PGA Tour over alleged antitrust violations, stemming from the Tour’s decision to ban any golfers who signed with the Saudi-backed circuit.

‘They wanted to talk about antitrust, and I could care less,’ Congressman Tim Burchett (Republican-Tennessee) told the Washington Post. ‘It’s not Congress’s job. We’re a country of laws; take it up to the courts. That’s where it needs to be, not in the halls of Congress.

‘How in the hell are we wasting any time talking about a bunch of millionaires and a golf game?’ he continued. ‘This is all just Saudi propaganda.’ 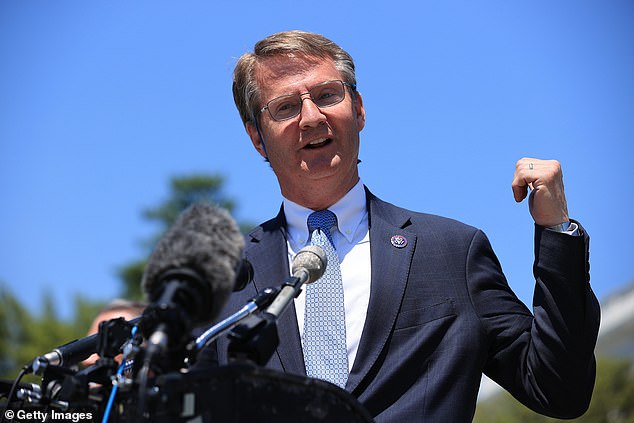 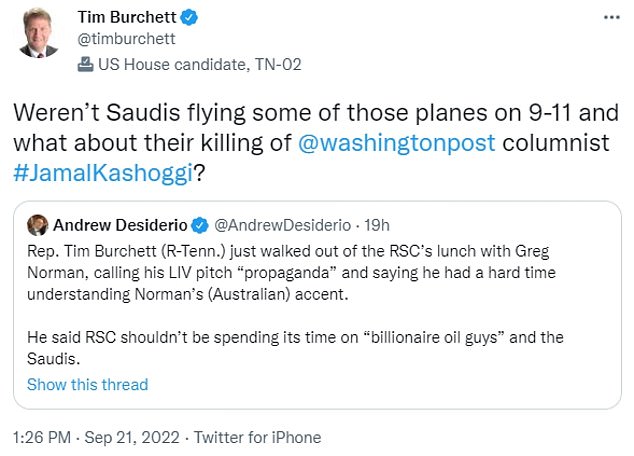 In a tweet, Burchett echoed some of the most common criticisms of the Saudi Arabian regime

On Twitter, Burchett later echoed frequent criticism of Saudi Arabia: ‘Weren’t Saudis flying some of those planes on 9-11 and what about their killing of @washingtonpost columnist #JamalKashoggi?’

With the promise of guaranteed contracts and $400m in prize money, Norman’s outfit has already lured away some of the biggest names in golf, including Phil Mickelson, who reportedly signed with the upstart tour for $200m.

On Wednesday, several lawmakers specifically objected to the proliferation of Saudi money.

‘Don’t come in here and act like you’re doing some great thing while you’re pimping a billion dollars of Saudi Arabian money and the Kingdom of Saudi Arabia in the United States,’ said Congressman Chip Roy (Republican-Texas).

Roy sent a letter to Attorney General Merrick Garland in July urging the Justice Department to investigate LIV for allegedly failing to register as a foreign agent.

‘It just ticked me off,’ Burchett said after leaving a meeting with Norman, former education secretary Betsy DeVos and 64 other members of the conservative Republican Study Committee.

‘Everybody’s assumption of Congress is a bunch of country clubbers out there playing golf with millionaires. By bringing Greg Norman in here, they’ve just perpetuated that myth even more.’ 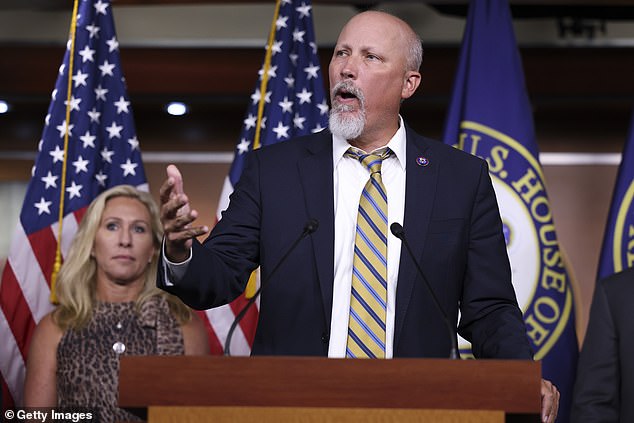 Despite the criticism, LIV Golf viewed Wednesday’s meetings as a positive.

‘Greg Norman had a very productive day on Capitol Hill today in front of some 60 members of Congress,’ LIV spokesman Jonathan Grella said in a statement Wednesday. ‘His message about the benefits of competition was very well received, even if a couple members of Congress say otherwise.’

Norman also had his own message for lawmakers on Instagram.

‘To the 100 bipartisan lawmakers I met within the past 24 hours on The Hill: thank you. Thank you for the opportunity to visit and tell @livgolfinv’s story.

‘Freedom of speech and free enterprise form the bedrock of what this country was founded on. Competition is a vital part of the DNA of the United States. Competition breeds excellence. Without competition, there is no capitalism.

‘I enjoyed meeting each and every one of you and sharing our vision of golf diplomacy. On a national level as well as a global level this is true: golf is a force for good.’

Several lawmakers had already been critical of LIV Golf, including Illinois Senator Dick Durbin (Democrat), who accused the tour of trying to ‘cover a blood-stained hand’ with a ‘golf glove.’ 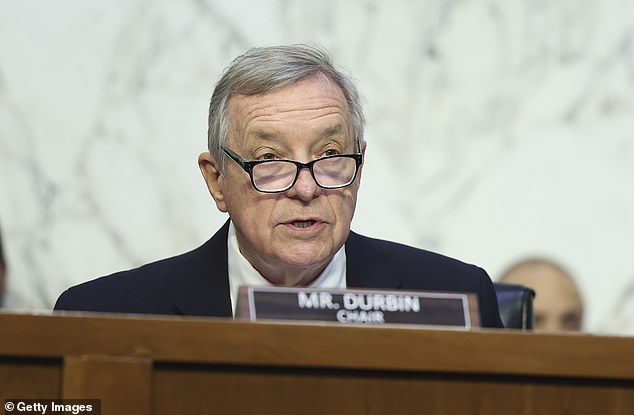 Eleven players originally filed the lawsuit against the PGA on August 3, but Jason Kokrak, Pat Perez and Mexico’s Carlos Ortiz and Abraham Ancer have since withdrawn their names.

LIV has been intertwined with political issues from the very start, with Mickelson admitting to author Alan Shipnuck in February that Saudi Arabia — whose Public Investment Fund is financing the big-money LIV tour — were ‘scary motherf***ers’ with a bad human rights record.

Several big names, including major winners such as Brooks Koepka, Dustin Johnson, Cameron Smith and DeChambeau, have been lured to the startup circuit with lucrative deals such as signing bonuses reportedly worth as much as $100million to $200million.

Critics say LIV Golf, bankrolled by Saudi Arabia’s PIF, amounts to ‘sportswashing’ by a nation trying to improve its reputation in the face of criticism over its human rights record.

Since 2021, the PGA Tour has paid $360,000 to the firm DLA Piper to lobby lawmakers on multiple topics including ‘Saudi Golf League proposals’, according to CNBC. 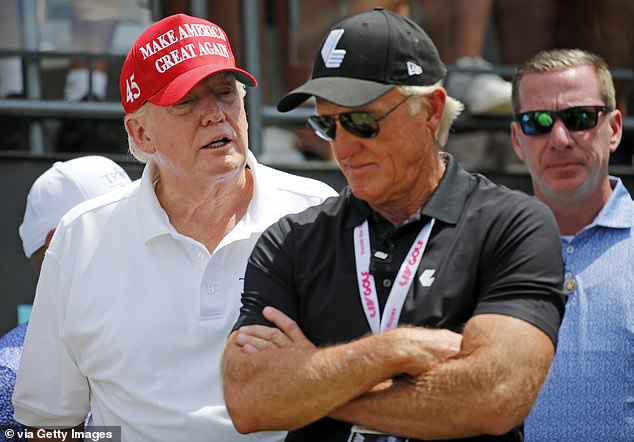