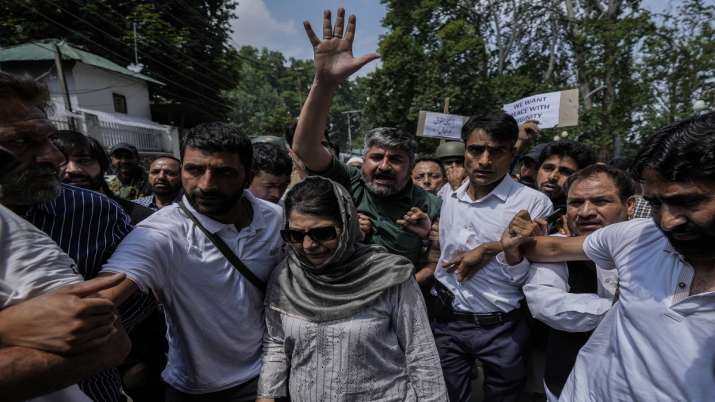 As Jammu and Kashmir moved into its third year as a Union Territory after the abrogation of Article 370 and 35A of the Constitution, Peoples Democratic Party chief Mehbooba Mufti on Friday pledged to restore J-K’s flag and Constitution. Mufti said that they would “compel” the government to solve the long-standing issue of Kashmir.

“The BJP will remove the Constitution of the country in the coming time and make it a religious nation. The flag that you hoist with pride will be changed to the Bhagwa (saffron) flag. If you still do not wake up, everything will be destroyed. They will change Constitution in the same way that they snatched the flag and Constitution of Jammu and Kashmir,” the PDP chief said while cuationing the people.

“But we pledge, we will not only take back our flag but our Constitution as well, but also we will compel the government to solve the issue of Kashmir for which numerous people have sacrificed their lives,” she added. The BJP hit back at her remarks accusing her of propagating an “anti-national agenda”. Speaking to ANI, J-K BJP leader Ravinder Raina said that the PDP chief is “frustrated” seeing massive support for Azadi Ka Amrit Mahotsav in the Valley.

“Seeing massive support for Azadi Ka Amrit Mahotsav in Jammu and Kashmir, Mehbooba Mufti is in frustration. She once created controversy over the tricolour and today when she saw people in J-K hoisting the flag, she is in desperation. She is stoking anti-national propaganda,” he said.

Raina further alleged that Mufti is making attempts to create a “vicious” atmosphere. “People have rejected her theory of divide and rule, which is why she is making an attempt to create a vicious atmosphere,” he said.