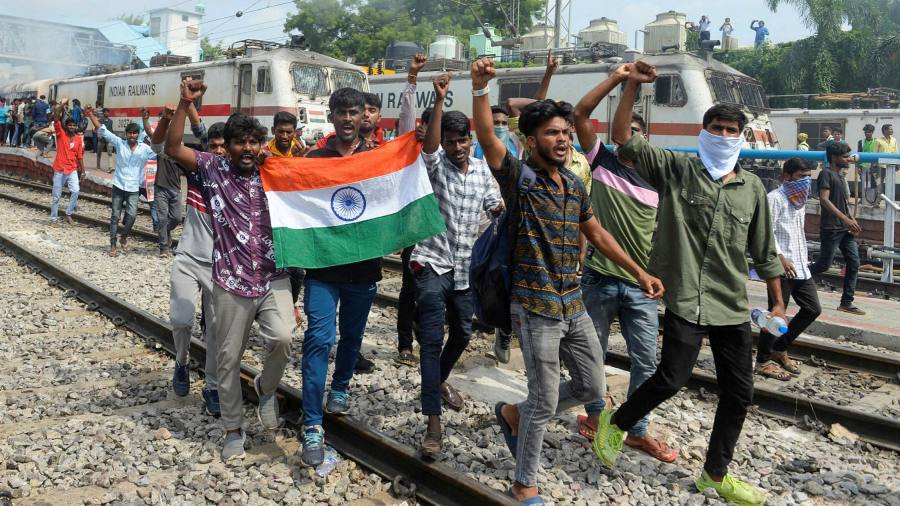 Aspiring military recruits have launched violent protests across India over plans by prime minister Narendra Modi’s government to replace many permanent positions in the armed forces with four-year contracts.

The furious reaction to the proposed reforms has exposed the extent of India’s job crisis, particularly for young people for whom a career in the armed forces represents coveted economic security.

Thousands of people, including many young Indians preparing for the competitive selection process, have reacted with outrage. In states including Bihar in northern India and southern Andhra Pradesh, angry crowds have vandalised trains, cars and government buildings, leading to hundreds of arrests. At least one person has been killed in the violence.

The armed forces, which suspended recruitment during the pandemic, were set to recruit an initial 40,000 people this year under the scheme. That is planned to increase to around 50,000 over coming years.

Under the programme, new recruits aged between 17 and a half and 21 — to be known as “fire warriors” — will be hired on four-year contracts, after which only a quarter will be retained. The rest will retire without a pension.

The government has defended the reform as a way to streamline the armed forces. Analysts say it is also designed to try to control India’s ballooning military pension bill, which accounts for more than half of the country’s defence budget.

A “young country can’t have an old army”, Ajit Doval, India’s national security adviser, told the ANI news agency on Tuesday. “If we have to prepare for tomorrow then we have to change.”

But analysts say the scale of the protests reflects the depth of the economic pain felt by young people in an uneven recovery from a devastating recession caused by the coronavirus pandemic.

Sushant Singh, a senior fellow at the Centre for Policy Research and Indian army veteran, said a military job gave “social standing” to those with few realistic alternatives. “Rural India is the kind of place where soldiers in the Indian army come from,” he said. “That is where the lack of hope in the economy . . . is being seen on the streets.”

While India has rebounded from recession to become the fastest-growing large economy in the world, this has not resulted in a surge in job creation.

More than 1mn Indians come of working age every month, according to research group Centre for Monitoring Indian Economy. While the country’s unemployment rate was 7.7 per cent in June, CMIE said the share of working-age Indians in the labour force had fallen below half.

Modi’s government has announced amendments to the recruitment scheme to try to appease protesters, including increasing the age limit for applicants to 23 for this year and reserving positions in the Coast Guard and elsewhere for former recruits.

Military recruitment in India is highly competitive. Young men dressed in white vests and shorts can be spotted running alongside rural highways early in the morning or late at night to prepare for the selection process.

“Our life’s dream has been ruined by the government,” one army aspirant in Bihar told channel NDTV, while another said: “After four years, we will not be known as fire warriors, we will bear the stigma of being rejected warriors.”