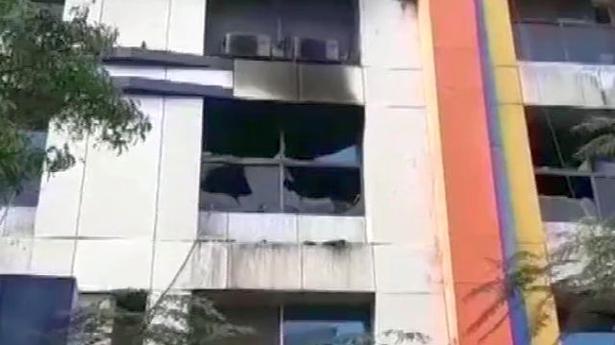 In yet another mishap in Maharashtra, 13 COVID-19 patients at an Intensive Care Unit (ICU) of Vijay Vallabh hospital in Palghar district’s Virar were killed in a fire early on Friday.

According to district officials, the ICU unit is at the second floor of the four-storey hospital and a total of 17 patients were undergoing treatment at the time of the incident. The fire broke out at around 3 a.m.

According to information from the State government, three fire engines reached the spot immediately and the inferno was doused by 5.20 a.m.

“While 13 patients died in the tragedy, the surviving patients have been moved to different hospitals to safety and further treatment,” said an official.

Chief Minister Uddhav Thackeray announced financial aid of ₹5 lakh to the kin of the deceased and ₹1 lakh to those injured.

Prime Minister Narendra Modi too approved ex-gratia of ₹2 lakh each from PMNRF for the next of kin of those who lost their lives.

“The fire at a Covid-19 hospital in Virar is tragic. Condolences to those who lost their loved ones. May the injured recover soon,” said Mr. Modi.

State Health Minister Rajesh Tope said that Mr. Thackeray had ordered an investigation into the incident.

Two days ago, 24 patients lost their lives in Nasik after leakage in an oxygen tank at Dr. Zakir Hussain Hospital run by Nasik Municipal Corporation (NMC). In March, a fire broke out at a hospital in Mumbai’s suburban Bhandup, which claimed nine lives. In January, 10 infants died after a fire broke out at a special newborn care unit of Bhandara district hospital in Bhandara district of Vidarbha.

Leader of Opposition Devendra Fadnavis questioned the government on its preparedness and successive announcements of conducting fire audits.

“It is being said after every incident that fire audit will be conducted across the State. At a time when hospitals are running under pressure, the government seems to be avoiding its responsibility,” he said.

Maharashtra Navnirman Sena (MNS) chief Raj Thackeray too questioned whether the State administration learnt anything from the past incidents. “The government must immediately form a team of officials to conduct fire audits and take immediate action on problems encountered,” he said.

Google may reveal a huge Android upgrade this week and that’s...

Santanu Hazarika and his world of cyborg queens and laser kings