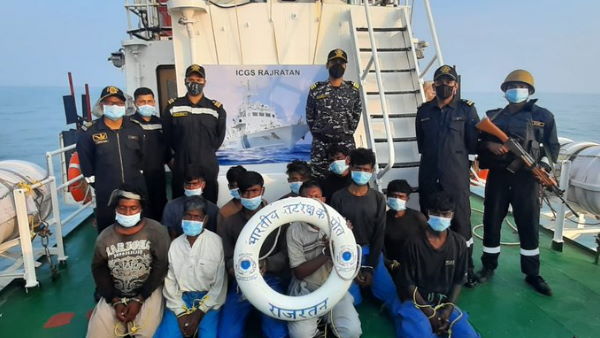 Ahmedabad, 15 SeptemberIndian Coast Guard (Indian Coast Guard) has apprehended a Pakistani boat off the Gujarat coast. Together with this boat, 12 crew members have additionally been arrested. The ICG has caught this boat of Pakistan on Thursday evening. The boat and 12 individuals on board are accused of illegally coming into Indian waters.

Indian Coast Guard Ship Rajratan has caught this Pakistani boat on entry into Indian waters throughout a surveillance mission. The title of this boat of Pakistan is of Allah Pawakal. The boat has been delivered to Okha for additional investigation after being seized.

The Indian Coast Guard (ICG) has stated in its assertion on Wednesday that on the evening of September 14, the Indian Coast Guard Ship Rajratan was on patrol, throughout which it intercepted a Pakistani boat named Allah Pawakal in Indian waters. It had 12 crew members. ICG stated that regardless of dangerous climate, this Pakistani boat was caught on Tuesday evening. The boat was taken to Okha in Devbhoomi Dwarka district of Gujarat to research the matter.