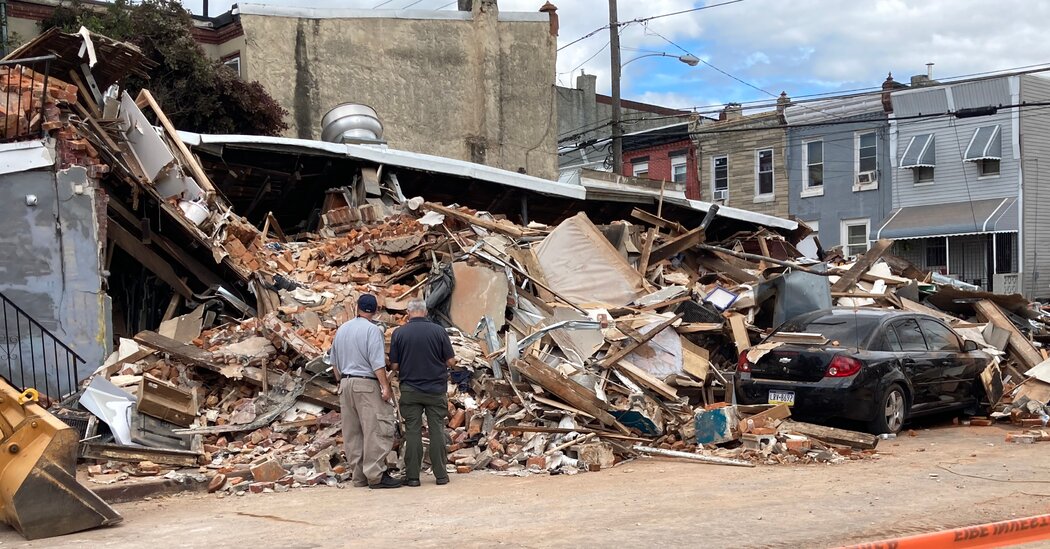 PHILADELPHIA — A pizzeria collapsed in Philadelphia early on Saturday morning, killing one firefighter and injuring four other firefighters and a city building official, the Philadelphia Fire Department said.

The building collapsed shortly before 3:30 a.m., following a fire call that came in a little before 2 a.m., according to Craig Murphy, a deputy commissioner of the Fire Department. The building housed Star Pizza Fish and Chicken, in the Fairhill section of North Philadelphia, a predominantly Hispanic neighborhood about three miles north of downtown that is dominated by two- and three-story rowhouses.

During the response to the fire, eight occupants of the building were safely evacuated, according to a statement released by the office of Mayor Jim Kenney.

The firefighter killed was identified as Lt. Sean Williamson, 51, a 27-year veteran who had been assigned to Ladder 18 in the Hunting Park section of the city, the mayor’s office said.

The five who were injured were Lt. Sylvester Burton, a fire marshal; Lt. Clarence Johnson; the firefighters Dennis Daly and Robert Brennan Jr.; and Thomas Rybakowski, a supervisor with the city’s Department of Licenses and Inspections.

Mr. Rybakowski, Lieutenant Johnson and Lieutenant Burton were treated and released. Mr. Brennan and Mr. Daly were in critical but stable condition at Temple University Hospital, the mayor’s office said.

The collapse occurred after the fire was under control, when firefighters were looking for any hidden fires and Mr. Rybakowski was assessing the building, Adam K. Thiel, commissioner of the Philadelphia Fire Department, said at a news conference Saturday.

The building was last inspected in June 2020, and since that time there had been no inspections or complaints, city officials said.

The collapse came “with almost no warning,” Mr. Thiel said.

Although it was unclear exactly what had caused the structure to fall, Mr. Murphy said that “the building was affected by fire.”

One firefighter had jumped from the building to escape, Mr. Murphy said. Four people — three firefighters and Mr. Rybakowski — were initially trapped but quickly rescued, the mayor’s office said.

Lieutenant Williamson, a former Marine, is survived by his mother and son, the mayor’s office said.

Earlier on Saturday, after everyone had been removed from the building, the scene was busy with police officers, firefighters and officials from Philadelphia Gas Works and the Department of Licenses and Inspections. Workers were beginning to load debris into trucks, but the intersection of Third Street and West Indiana Avenue remained blocked by rubble.

Elliott Lopez, who lives nearby, said he was at the restaurant at around 11:30 p.m. Friday. He said he was alerted to the fire and subsequent collapse of the building by a phone call from his brother, who had seen a report of the incident on Facebook.

“I was here last night, bought a pizza, and they’re calling me at 4 o’clock in the morning to say the pizzeria was on fire,” said Mr. Lopez, 55, standing a few yards from where the building’s rubble lay in the street. He said he had arrived at the scene early Saturday to move a car he had parked at the intersection and found that it had already been moved by emergency workers.

Rolando Cortes, 55, who has lived in the neighborhood since the 1980s and said he and his wife would sometimes order pizza from the shop, said he had arrived at the intersection at around 7:30 a.m. He said he saw rescuers removing the body of the firefighter later identified as Lieutenant Williamson.

“They put a flag over him and carried him out on a stretcher,” he said.

The agencies responding included the Philadelphia Office of Emergency Management, the energy company PECO and the American Red Cross. The Philadelphia Fire Department’s Fire Marshal’s Office is conducting a routine investigation into the cause of the fire, according to a statement released Saturday.

Lieutenant Williamson is believed to be the first Philadelphia firefighter to die in the line of duty since January 2018, when Lt. Matthew LeTourneau was killed in a fire and building collapse.

Mr. Kenney, the mayor, said in a statement that all city flags would be flown at half-staff for 30 days in honor of Lieutenant Williamson. “This is a heartbreaking day for our city,” he said.

Share
Facebook
Twitter
Pinterest
WhatsApp
Previous articlePhiladelphia firefighter killed, 5 others injured in building collapse
Next articleI’m a gardening pro – I cringe every time I do my own tip but it works, when you see my results you’ll want to do it too

A Damp Independence Day Weekend Continues for Much of the Country