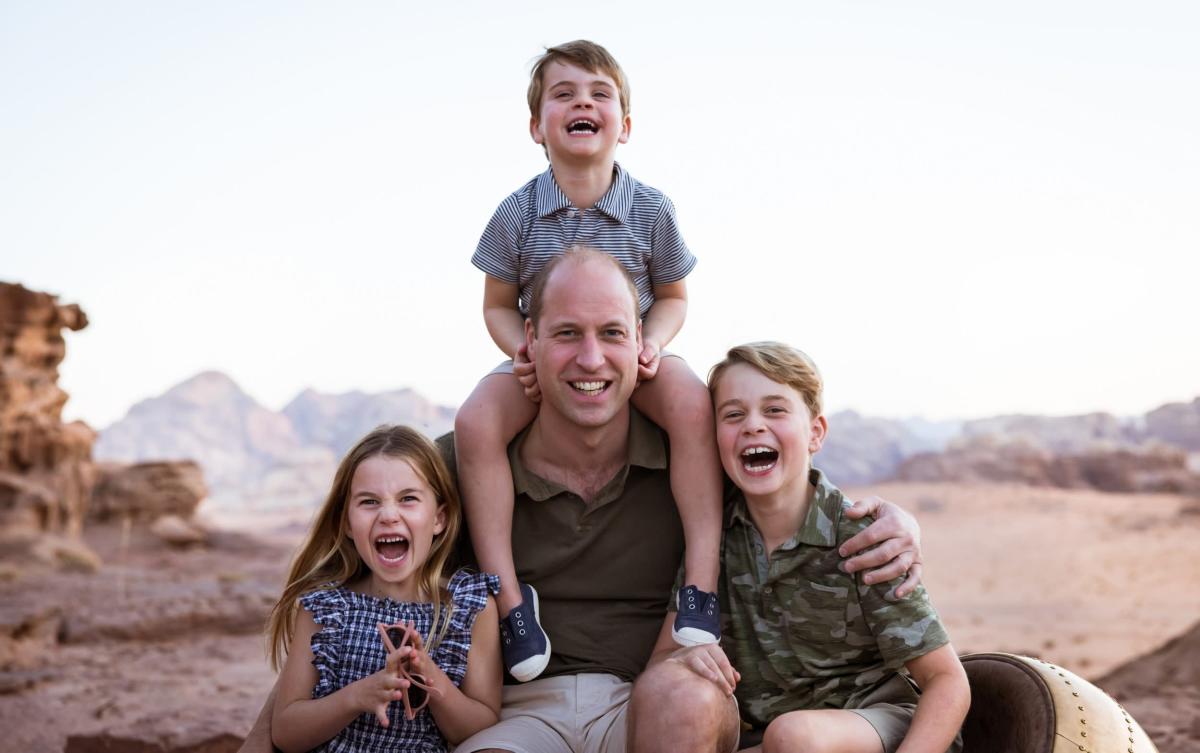 Well the children are certainly enjoying themselves, even if Prince William looks slightly anxious that little Louis may be about to tug his ears.

But then Father’s Day just wouldn’t be the same without the children having fun at Dad’s expense.

In this engaging photograph released by the Duke and Duchess of Cambridge to mark the occasion the Duke is seen with Prince George, Princess Charlotte and Prince Louis while on holiday in Jordan.

The picture was taken in the Autumn of 2021 when the family were on a trip arranged by the Duchess to visit her former childhood home.

A similar image from the holiday, but including the Duchess, was used as the family’s Christmas card last year. It showed the Duke in shorts, sitting on a round golden pouffe, with Prince George and Princess Charlotte perched on a traditional Jordanian camel stool and Prince Louis on a sheepskin rug.

The Duchess spent three years living in Jordan as a child, when her father Michael worked for British Airways in Amman.

In 2018, her husband paid an official visit to the country, stopping off at the archeological wonder of Jerash, where the young Kate Middleton once posed for a photograph with her sister Pippa.

The Duke said at the time that his wife was “very sorry”  she couldn’t join him on the tour, adding: “Her family remembers very fondly the almost three years she spent here as a child.”.

The country is considered an essential ally to Britain in the Middle East, aiding stability in the region and taking in a large number of refugees from its surrounding countries and the  Cambridge’s visit was  seen as a recognition of that relationship.

The couple have previously released more formal pictures taken by professional photographers, or ones taken by the Duchess herself in the countryside of their home in Anmer, near Norfolk.

But this one – though not taken by Catherine, according to palace sources – could come straight out of a typical family album.

One can almost hear ‘everyone make Dad laugh’ being shouted by someone off-camera.