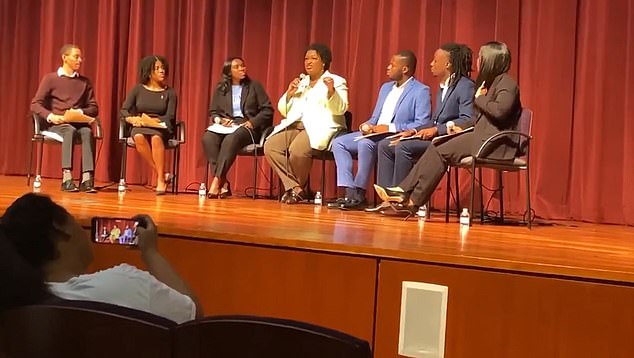 Stacey Abrams has sparked outrage across social media after she claimed that fetal heartbeats are a ‘manufactured sound.’

Pro-life advocates took to Twitter to criticize the Georgia Democrat’s comments as she claimed fetal heartbeats at six weeks are manufactured to allow men to ‘take control of a woman’s’ body.

Meanwhile, Planned Parenthood were caught altering their website to back up Abrams’ statement, changing the words that a fetus has ‘a very basic beating heart’ at six weeks to ‘a part of the embryo starts to show cardiac activity.’

‘It sounds like a heartbeat on an ultrasound, but it’s not a fully-formed heart – it’s the earliest stage of the heart developing,’ the organization now claims.

Anti-abortion activists honed in on Abrams’ outlandish statements and made sure to let her know what they thought on social media.

‘Stacey Abrams is 2502.857 weeks old, and I still can’t detect a heartbeat in her either,’ wrote conservative commentator Lavern Spicer.

Representative Buddy Carter of Georgia tweeted ‘Stacey Abrams claims there’s ‘no such thing as a heartbeat’ at six weeks. NIH says a fetal heartbeat begins at week 4 – What happened to following the science?’

US Senator Lindsey Graham also slammed her comments, saying she is trying to ‘change science’ by ‘denying that the baby has a heartbeat’.

Daily Caller reporter Laurel Duggan said When pro-aborts deny that fetal heartbeats can be detected at 6 weeks, they argue it’s not *technically* a heartbeat… No one is saying heartbeats picked up by sonograms are literally just fake (except Stacey Abrams).’

Abrams appeared to be talking about the technical definition of the heartbeat, which is electrical activity caught on a vaginal ultrasound and then used to mimic a heartbeat.

‘Does she think some doctor is hiding behind the Doppler beatboxing into a microphone in perfect imitation of a heartbeat? Stacey Abrams is so deranged,’ podcast host Liz Wheeler wrote.

It can only be detected through invasive transvaginal scan before six weeks, and a fetus’ heart is often not fully developed until the 10th week of pregnancy.

It is at that point of a pregnancy that an abdominal ultrasound can be used pick up the sound of a fetus’s heartbeat can be picked up.

Addressing the audience at the event she said:  ‘There is no such thing as a heartbeat at six weeks. It is a manufactured sound designed to convince people that men have the right to take control of a woman’s body.’

DailyMail.com columnist Meghan McCain also hit out at Abrams, saying: ‘Hearing my babies heartbeats at 6 weeks is hands down one of the most exciting, liberating and most beautiful moments of my entire life.

‘Hands down. Stacey Abrams is a very sick person to say this and somehow accuse doctors of faking fetal heartbeats. Full stop.’

Senator Adams added: ‘Stacey Abrams perfectly encapsulates the belief and direction of the Democratic Party when it comes to the unborn — deny science and support abortion on demand up until the moment of birth. 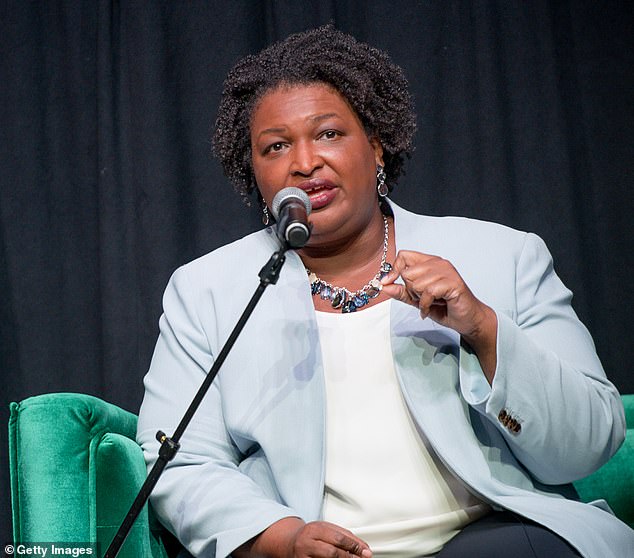 Abrams took aim at the state’s controversial ‘Heartbeat Law,’ which bans most abortions by six weeks, when a doctor can detect a fetal heartbeat 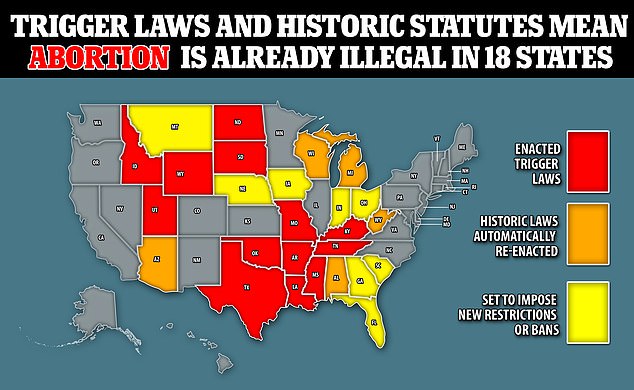 A fetal heartbeat can be detected by a vaginal ultrasound between 5 ½ and 6 ½ weeks, when the fetal pole can be seen.

The transvaginal ultrasounds are offered during women’s first trimester (weeks one to 12) and can sometimes see the fetal pole, which is the first visible sign of a embryo developing.

It may be seen at a crown-rump length (CRL) of 2-4mm, and the heartbeat may be seen as a regular flutter when the CRL has reached 5mm.

At 6 to 7 weeks, the baby’s heart ‘continues to grow and now beats at a regular rhythm’, which can be seen by vaginal ultrasound.

An abdominal ultrasound can also be conducted from around 7 ½ weeks, but many don’t take place until 11 weeks, and can try to confirm a baby’s heartbeat from 10 weeks.

The technical definition of the heartbeat, which is electrical activity caught on a vaginal ultrasound and then used to mimic a heartbeat.

It can only be detected through invasive transvaginal scan before six weeks, and a fetus’ heart is often not fully developed until the 10th week of pregnancy – when an abdominal ultrasound can be used pick it up.

‘This extreme position only works if you deny science. Today’s outrageous statement fits a pattern.

‘Abrams is a socialist on economic matters, soft on crime, and now wants to deny even the most basic protections to the unborn by claiming they do not have a heartbeat at six weeks. She is wrong on so many levels.’

Dr. Kelli Ward, chairwoman of the Arizona GOP, said: ‘This woman not only again proves she is a total idiot or a liar (or both), but also shows how gullible her supporters are.’

Sports commentator Michele Tafoya added: ‘So, Stacey Abrams… When my (male) doctors told me they could no longer hear my baby’s heartbeat… as I lost pregnancy after pregnancy… Was that fake, too?

‘Did they manufacture the absence of my baby’s heartbeat in order to force me to terminate the pregnancy?’

The ‘Heartbeat Law’, which has been passed in nine states, bans women from getting an abortion from six weeks – except in exceptional circumstances – with only some states having exceptions for rape, incest or abuse.

The laws were reinstated over the summer after the Supreme Court overturned Roe v. Wade earlier this year, sparking outrage and protest across the country.

A spokesman for Abrams’ campaign said she supports the guidelines established in Roe v. Wade and Planned Parenthood v. Casey, in which justices found a fetus was viable at about 23 weeks.

In a statement they said: ‘Stacey Abrams has already stated her support for limits in line with Roe and Casey — and doctors have been clear that the so-called ‘heartbeat law’ is not medically accurate.’

Abrams was pro-life until she turned 30, and has now made an aggressive switch to speak out in support of the pro-abortion movement.

Her comments come less than a week after she told The View that she supports abortions ‘until the time of birth’ in some cases.

However OBGYN Dr. Nisha Verma, of the American College of Obstetricians and Gynecologists, agreed with Abrams comments, saying that the term ‘fetal heartbeat’ was misleading.

She told NPR : ‘At six weeks of gestation, those valves don’t exist. 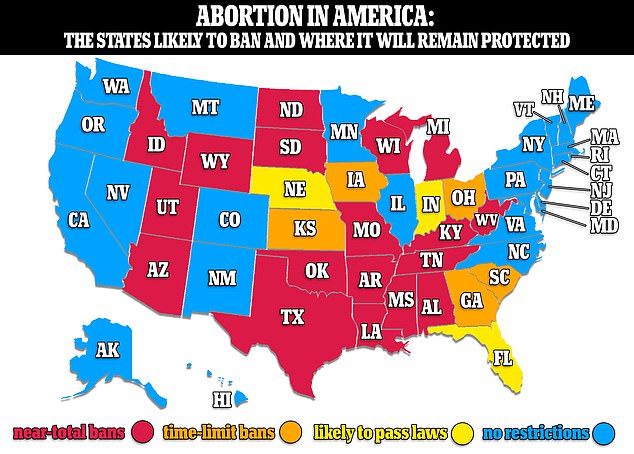 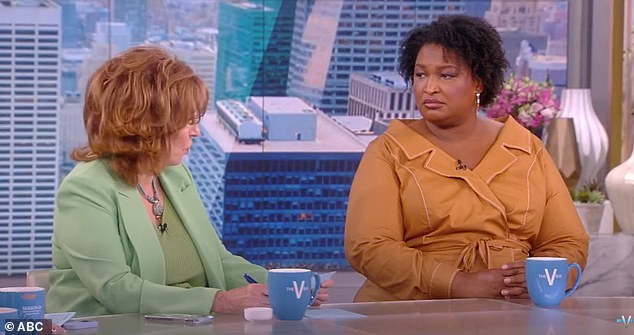 Last week, Abrams told the hosts of The View that she supports abortions ‘until the time of birth’ in some cases, saying the issue is medical, not political

She added that while she wouldn’t consider any embryo as having a heartbeat at six weeks, doctors use a language that patients can connect with.

Abrams, who said she was raised pro-life, presented her new views on abortion while on The View last week.

When asked by the show’s new conservative host, Alyssa Farah Griffin, if she believed there should be any limitation on abortion, Abrams said: ‘Viability is the metric and that if a woman’s health or life is in danger then viability extends until the time of birth.’

Abrams added that abortion is a ‘medical decision not a political one’ and called various state-imposed limitations on the practice ‘arbitrary.’

The stance is a far shift from Abrams’ previous views on the issue, as she criticized a  friend in college who considered getting an abortion.

Her views shifted, however, once she began to consider running for office, according to a New York Times profile of Abrams.

She admitted as much on CNN’s State of the Union in August, saying she began to reevaluate her religious upbringing and her pro-life position in college.

‘I was anti-abortion until I went to college. And, there, I met a friend who has my shared faith values, but we started having conversations about what reproductive care and abortion care really is,’ she said. 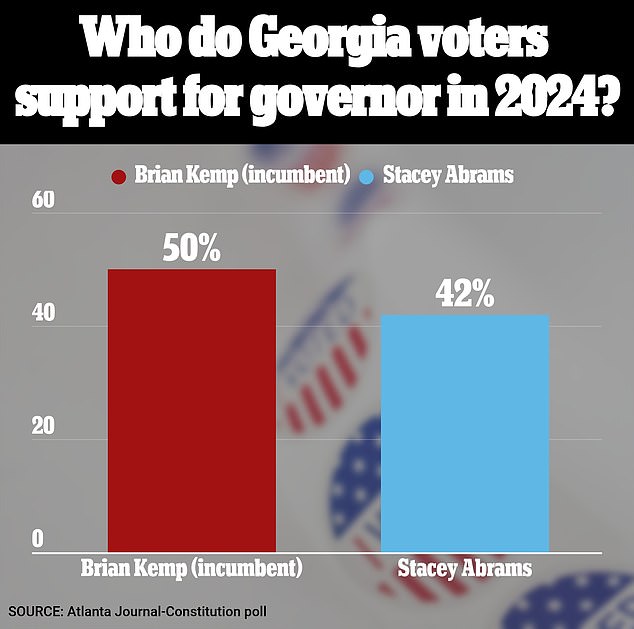 Earlier this week, Abrams made abortion rights the focus of her campaign bid against Gov. Brian Kemp, who she lost to in 2018 despite insisting that the election was stolen.

‘Women deserve full citizenship in the United States and certainly in the state of Georgia, and they are being denied that because of Brian Kemp’s 6-week ban,’ she told CNN.

Kemp has repeatedly defended the six-week ban and said he would not allow the election to be focused on abortion, but rather on the economy.

According to the latest Quinnipiac poll, Kemp is leading the race with 50 percent of voters supporting the Republican governor compared to the 48 percent backing Abrams.

The poll is slightly favorable to the one released by the local Atlanta Journal-Constitution, which had Abrams down to 42 percent while Kemp still led with 50 percent of voters backing him.

The poll found that while 57 percent of voters wanted to know the candidate’s views on abortion, an overwhelming 41 percent said inflation was the number one issue facing Georgia, while only 12 said the same about abortion.

Jay Leno Gets To Grips With A Very Special McLaren 720S