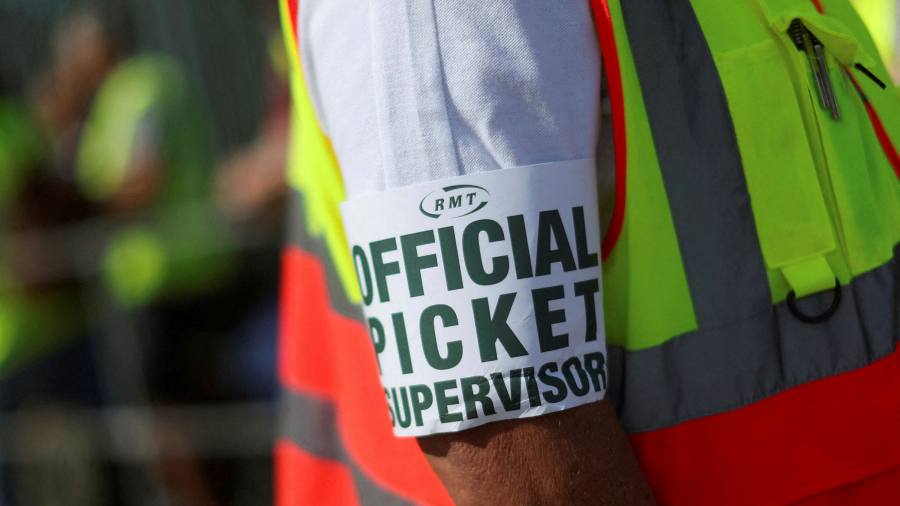 This week’s UK tube and rail strikes are disrupting millions of journeys. But the pandemic gave Britons plenty of practice at working from home. That reduces disruption to businesses, losses to output and the leverage exercised by rail unions.

Only about one-tenth of workers travel to work by train. London commuters are the biggest rail users, but also the most adept at homeworking. The economic hit from workplace no-shows will therefore be about £91mn, roughly half what it would have been pre-Covid, according to economic consultancy CEBR.

Revealingly, the unions, which are striking for higher pay, have scheduled one strike day for this Saturday. Many businesses can work round weekday disruption. But retailers still need higher Saturday footfall.

Retail traffic is expected to drop 9.3 per cent this week, according to Springboard. Translated to lost sales, that could cut turnover by £113mn and gross value added — a measure of economic output — by £24mn.

Hospitality will also be hard-hit. Trade body UKHospitality warns of a £500mn reduction in revenues; double that if the tourism, leisure and theatre industries are included.

The railways themselves will be the biggest losers. State-owned Network Rail predicts losses of up to £150mn, two-thirds from lost revenue, with the rest from disruption to engineering works.

The impact on the train operators themselves will be softened by a new franchise model that shifts risk on to the government. For example, Go-Ahead, which operates the Thameslink, Southern and Great Northern rail services, now earns a fixed management fee of 0.5 per cent of its cost base, with an additional performance fee of up to 1.35 per cent.

The strike will shave down performance fees. But train operators risk no losses. That protection has made UK transport companies attractive to international bidders. Go-Ahead, for example, recently accepted a £650mn offer.

In summary, left-wing unions in a nationalised industry are striking for higher pay because inflation is steep. Britons raised in the fractious 1970s would start feeling quite nostalgic, were it not for remote working.