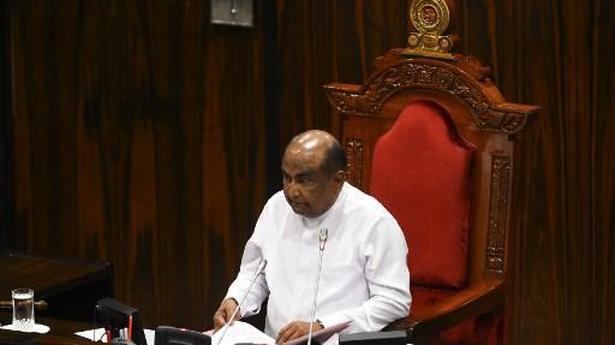 Mahinda Yapa Abeywardena, who was sacked for opposing the Indo-Lanka Peace Accord in 1987, has been unanimously appointed as the Speaker of Sri Lanka’s new Parliament which met for the first time on August 20 following the August 5 general election.

At the inaugural session of the 9th parliament, Foreign Minister Dinesh Gunawardena proposed Abeywardena for the post. The resolution was seconded by opposition Member of Parliament Ranjith Madduma Bandara.

Soon after he was appointed, Mr. Abeywardena, 75, was congratulated by Prime Minister Mahinda Rajapaksa and all other legislators.

Mr. Abeywardena, who is from the southern district of Matara, was removed from his seat in 1987 after entering the House four years before from the then ruling United National Party (UNP). He was opposing to the Indian intervention in Sri Lanka’s conflict with the Liberation Tigers of Tamil Eelam (LTTE) who were fighting to create a separate homeland for the Tamils in the country’s north and east.

His sacking from Parliament came as the then President J.R. Jayewardene and the then Indian Prime Minister Rajiv Gandhi signed the deal which brought the Indian troops to Sri Lanka’s northern and eastern battle fields.

Mr. Abeywardene, ironically became the Chief Minister of one of them, the southern provincial council in 1994 until he contested the 2001 national parliamentary election.

During felicitation speeches on Mr. Abeyawrdena’s appointment as Speaker on August 20, one of the party leaders praised his courage to stand up against the Indo-Lanka Accord.

He was unanimously elected as the new Parliament met for the first time. Mr. Abeyawrdena is a member of the Sri Lanka People’s Party (SLPP).

Prime Minister Rajapaksa-led SLPP won a landslide victory in the parliamentary elections held on August 5. The SLPP and its allies won a record 150 seats in the 225-member Parliament.

Angel Broking IPO To Open On September 22. Things To Watch...

Look, who is again knocking RIL doors to invest in Jio...