The last holder of an invaluable music legacy in Kolkata is gone. What remains are memories and three rooms of photographs

In a few old buildings linger the memories of scintillating concerts held here for generations, transmuted, in a manner of speaking, into a gallery of colourised photographs of great Indian classical musicians. These rarities hang in three wooden-floored rooms on the first floor of the double-storied, 300-year-old house of Ramlochan Ghoshe and his illustrious descendant, Bhupendra Krishna Ghoshe, at 46 Pathuriaghata Street, off Chitpore in Kolkata.

Jayanta Ghoshe, Bhupendra’s youngest son, was the last member of the family to have witnessed the days when the best of musicians, rajas and zamindars from across undivided India congregated in this sprawling house to attend its celebrated concerts. Jayanta-babu, a widower with no children, died aged 85 last month. One wonders if other members of the scattered family will preserve the invaluable legacy he has left behind.

Pathuriaghata was once the seat of aristocratic Bengali families like the Tagores (not to be confused with Rabindranath’s branch of the same family) and the Ghoshes, and of merchant princes like the Mullicks. Under their patronage, Pathuriaghata turned into a cultural Mecca.

I remember seeing Jayanta-babu, tall and gaunt, dressed in white singlet and pyjamas or dhoti, pacing the three rooms, an ancient German shepherd padding behind him. There’s an onrush of emotion when one steps into these magical rooms.

The music is inaudible, but its spirit comes alive. Bhupendra had collected rare photographs from various sources. Some pictures were photographed, and later coloured, by Durganath Bhattacharya, whose studio was in Baranagar.

Ramlochan Ghoshe, the paterfamilias who died in 1820, was baniyan or agent to Warren Hastings. In 1782, he bought the 30 cottahs that No. 46 Pathuriaghata Street occupies from Charles Hamilton. The house is built around a central courtyard, with the thakurdalan or puja room on the ground floor, still famous for its annual Durga Puja. 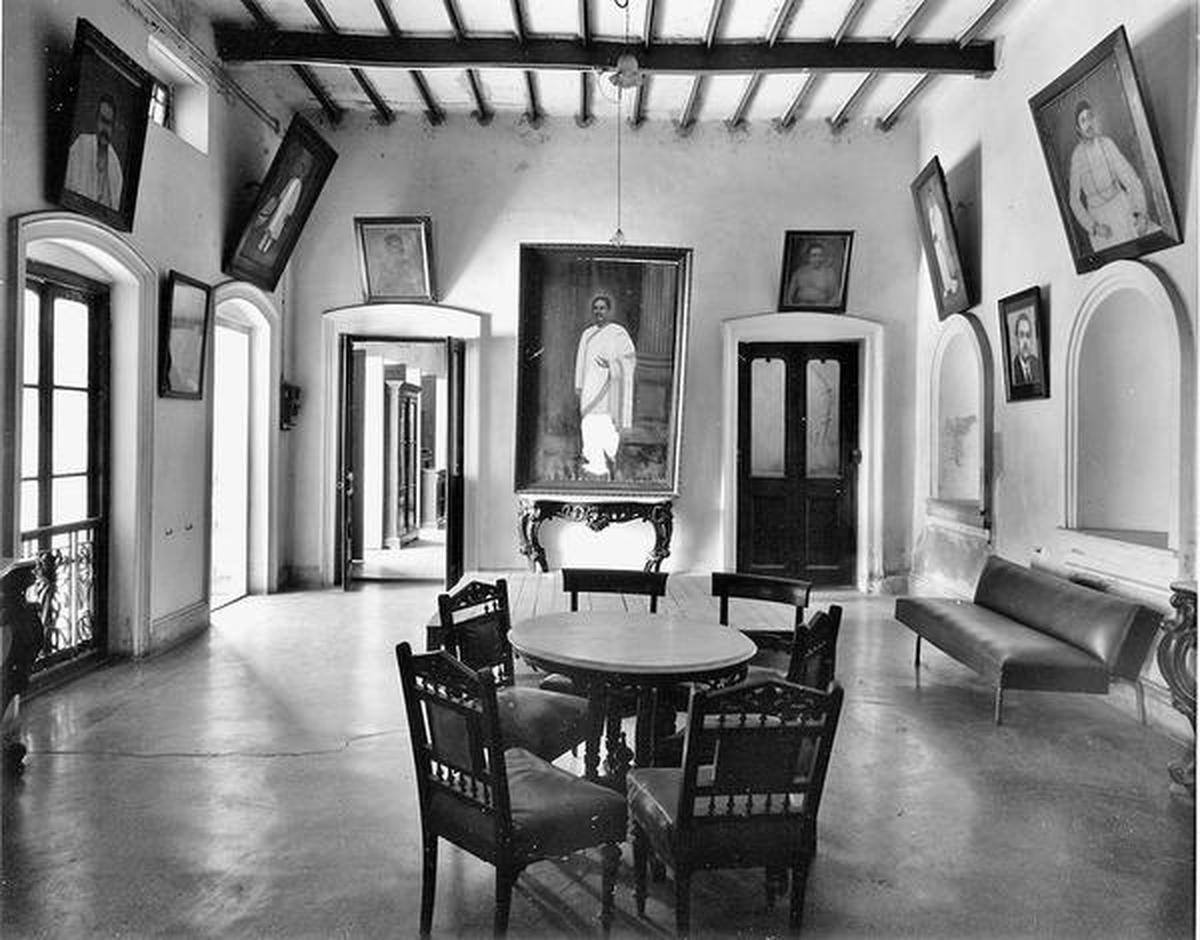 The Ghoshe family’s association with music is generations long. It began with Bhupendra’s father, Trailokya Nath, who used to play the pakhawaj and the sitar. From those days, the Ghoshe house became famous as a second home of great musicians and music lovers. The guru of Bade Ramdasji, dhrupad-khayal singer Jay Karanji, and well-known tappa singer Ramchandra Chattopdhyay, whose teacher was Ramzan Khan, were all Trailokya’s guests. Radhika Prasad Goswami, the esteemed singer from the Bishnupur Gharana, sojourned here for a long time.

Tagore’s grand-nephew, Soumendranath, singer-musicologist Dilip Roy, singer Girija Shankar Chakrabarty would all drop by for music lessons from Radhika Prasad. And Bhupendra would often accompany him on the harmonium.

Bhupendra then arranged for the great Jnanendra Prasad, nephew of Radhika Prasad, to teach his son Manmatha. Aficionados would flock to the house to listen to Jnanendra. Bhupendra himself had learnt music under the tutelage of Prof. Mohammad Ali and the sitar under Kaukub Khan.

Before the 1920s, Bhupendra held concerts of mostly Bengali dhrupadiyas in the courtyard. Later, he threw his house open to the greats from across India. Faiyaz Khan was a frequent visitor and Vishnu Digambar Paluskar came here with his pupils around 1928 and stayed for a couple of months. Divas like Gauharjan, Malkajan, Noorjahan, and Zohrabai were regulars.

From homes to halls

Classical music those days was almost always performed at baithaks in the homes of patrons like Bhupendra. Inspired, however, by the music conferences of Kashi and Allahabad, Bhupendra launched a similar ticketed affair in Kolkata, with a competitive section for young musicians. Although it lasted only a couple of years, the conference became a legend with a lasting influence. Encouraged by Raja Prafullanath Tagore and Maharaja Jogindranath Roy, it was decided the All Bengal Music Conference would host not just classical music but also folk, kirtan, and adhunik (modern) music as well as classical dance.

Rabindranath Tagore inaugurated the first conference in 1934 in the Senate Hall (since demolished) of Calcutta University, a year before Jayanta-babu was born. After Bhupendra’s death, his son Manmatha continued the tradition till 1953.

It was this conference that began the process of democratisation of Hindustani classical music in Kolkata, popularising it among the middle classes. It is no wonder that Calcutta at that time was India’s cultural capital.

In 1953, when Bade Ghulam Ali sang here, the concert continued till the crack of dawn. People spread newspapers and sat on the road outside and even the tram service was stopped. That same year, the All Bengal Music Conference ended. Some attempts were made to revive it but nobody could bring those days back.

Today, the three rooms stand as silent testimony to the glorious musical patronage of a lost era.

The writer focuses on Kolkata’s vanishing heritage and culture

Emmys 2020: All you need to know about the virtual awards...

Elvis Presley affair: King’s friend on WHY Ann-Margret was ‘so SPECIAL’...