The Tokyo Olympics are turning into NBC’s worst nightmare 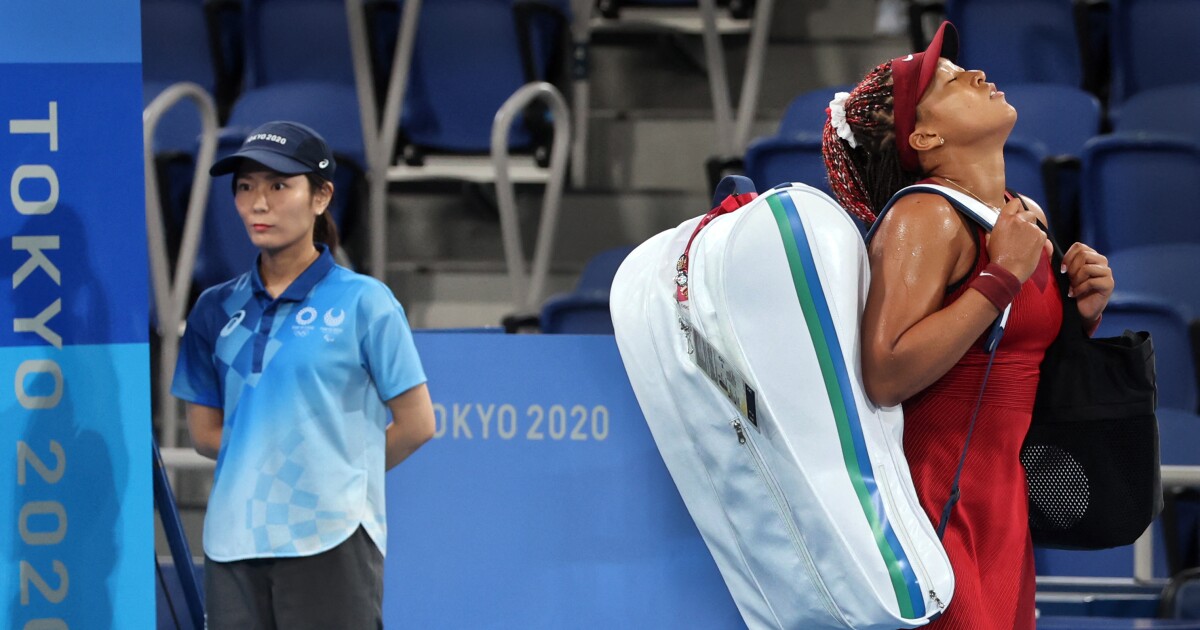 No one said these Olympics would be easy. Not even watching them.

Midway through the first week of the Tokyo Games, even the most cautiously optimistic viewer of Friday’s opening ceremony is now likely to be rubbing their eyes: With shocking upsets, unexpected exits, a 16-hour time difference and a thicket of broadcast, cable and streaming options, the most tumultuous Olympics in years are starting to catch up with the NBC stable of networks, which hold the lucrative U.S. television rights to the two-week event.

Times television editor Matt Brennan, senior writer Greg Braxton and digital editor Tracy Brown have been keeping an eye on the Games from the comfort of their homes. Read on for their discussion of the difficulties facing the Olympics and its American broadcasters — and a few of the silver linings that have emerged so far.

Matt Brennan, TV editor: As I prepared for bed Monday night, idly checking Twitter, the news broke of Japanese star Naomi Osaka’s third-round upset by the Czech Republic’s Markéta Vondrousová in the Olympic tennis tournament. Tuesday morning, I awoke to an Apple News push notification that the U.S. women’s gymnastics squad had silver-medaled in the team competition after its top athlete, Simone Biles, withdrew citing her mental health. And my first reaction to this one-two punch was, “Welp, I guess that means I can skip tonight’s telecast.”

I am a casual Olympics viewer, admittedly — following the bold-faced names, like Osaka and Biles; the big events, like swimming and track and field; and the most important stories, like… what in heck going on with the Tokyo Olympics? Amid a set of unprecedented challenges, including the COVID-19 pandemic and a crisis of legitimacy for the International Olympics Committee, I’m hard-pressed to remember a more chaotic and deflating start to what has been a TV juggernaut for most of my lifetime. I know y’all have been watching. What has your experience been so far?

Greg Braxton, senior writer: Today I tuned in to the USA women’s beach volleyball team trying to play a match in typhoon weather, which might sum up the Olympic viewing experience: The event has been overcome by a figurative typhoon. The spotlight and emphasis that NBC has placed on these opening marquee events, featuring some of sports’ biggest stars, have been crushed by a perfect storm of unimaginable disappointment and anticlimactic performances. Trying to make sense out of the maze of coverage among the various platforms of NBC, Peacock, the Olympic Channel, USA Network and others is difficult enough. Combine that with the news coming out of Tokyo about the stumbles of star athletes and it becomes doubly frustrating.

I watched the USA Men’s Basketball Team match on Sunday while reading the paper — there was no reason to pay close attention because a news bulletin several hours before announced they had lost to France. The result for the U.S. women’s gymnastics team was also broadcast far in advance, as you say. You would have had to stay in a closet all day if you didn’t want to know the outcome before turning on your TV tonight.

And I threw up my hands Monday when I found a rugby match on during NBC’s primetime programming block — and not Osaka, who was playing her match live on the Olympic Channel. The most famous female athlete in the world was being treated almost as a sideshow on a small stage when she should have been in the center ring. The outdated model of packaging the day’s events in primetime rather than showing one of the most anticipated stories of the Games live illustrated the network’s haphazard approach to the Olympics, which the age of social media has cast in an ever-harsher light.

It was Tuesday, though, that Olympic plans went south fastest. The hype surrounding the women’s gymnastics competition has been steadily building for months and hit a crescendo Sunday during the qualifying events. To hear this morning that Biles had pulled due to mental health issues after making some mistakes in the preliminaries was really heartbreaking. Everything seems to be going wrong, and that — on top of the logistical issues — makes it hard for an Olympics fan like me to maintain interest in watching.

The Olympics used to be the ultimate watercooler event. People rushed home, had watch parties, talked about these amazing athletes the next day. That whole era is gone, but it’s particularly obvious during these Olympics. That became clear with the “opening ceremonies.” It’s a shame.

Tracy Brown, staff writer: For me, figuring out how to watch the Olympics has felt like an Olympic-caliber obstacle course because I’ve been trying to catch the events I care about live before I get a news alert or see results trending on Twitter. This has meant figuring out, as has been mentioned, the various broadcast and livestream schedules — all while running on very little sleep. Even then, there’s no way to stay on top of everything, so I also am strategic about choosing what to watch when.

Luckily, the sport I’ve been most excited about — softball returning to the Olympics for the first time since Team U.S.A.’s stunning loss to Team Japan at the ’08 Games — is one I’ve been able to watch more or less spoiler-free. Softball kicked off its preliminary rounds even before the opening ceremony, so I got an early start in trying to adjust to the time difference. And, as of this writing, I still haven’t watched the Gold medal rematch between rivals U.S. and Japan that took place in the predawn hours Tuesday (in Pacific Time). But because so many other big storylines have dominated the headlines, I think I’ll be able to experience it as if it were live — if I’m careful.

And that’s kind of how the strategy part comes into play for me. I stay on top of the events I know I want to experience unspoiled and prioritize watching those live whenever possible. I appreciate the packaged primetime programming block for what it is, but I leave that for the nights I haven’t picked anything specific to see, or when no live event holds my interest. And then there are some sports, like gymnastics, where the feats of athleticism are so amazing that even if I know the results, I’ll tune in anyway. While it may not always be the specific athlete or team I’m rooting for, someone is going to have some incredible Olympic moment or memorable story.

All that is to say, I very much had mixed feelings in the lead-up to the Games, with the reality of the surging pandemic and the people of Tokyo and Japan calling for the event to be canceled. And I still have moments of playing mental gymnastics when I think about the bigger Olympics picture. But I love sports stories — even when I have no idea what the rules are sometimes — so as soon as the events got started I got sucked in despite how hard NBC, and the real world, have made it.

Brennan: You are so right, Tracy, about the silver linings: Whether the star is a Tunisian swimmer or a Filipino weightlifter, there are inspiring stories to be found in the Olympics so far, even if the spotlight isn’t shining where we might have expected. That’s the nature of sports.

Ultimately, my disappointment is not in the competition itself, but in the sense that the Olympic television I grew up on has not grown up with me.

In my job I often say that people don’t watch TV the way they used to, so we can’t cover TV the way we used to — and NBC has unfortunately failed to reinvent the model developed in Sydney, Athens and Beijing for an ecosystem now dominated by streaming platforms and social media. All of the struggles you’ve enumerated above and others cited to me by our Times colleagues, are symptoms of this problem: live coverage bouncing between networks, the lack of timely on-demand replays, Peacock’s unintuitive design. Even the tradition of focusing the lion’s share of promotional attention on a handful of name-brand American stars like Biles seems parochial in a climate of global fame and increased sensitivity to the pressures on elite athletes.

I don’t envy the decision-makers at NBC, who are faced with broadcasting a highly complex, real-time sporting event to a notoriously fickle audience. Certainly, no one could have predicted what the media landscape would look like today when the network became the Summer and Winter Olympics’ exclusive U.S. home starting in 2000, or even when NBC and the IOC signed their last contract extension, through 2032, seven years ago. But it’s hard not to think that the Tokyo Games are shaping up to be NBC’s worst nightmare: evidence that one of TV’s most lucrative events won’t transition smoothly into the medium’s streaming age.