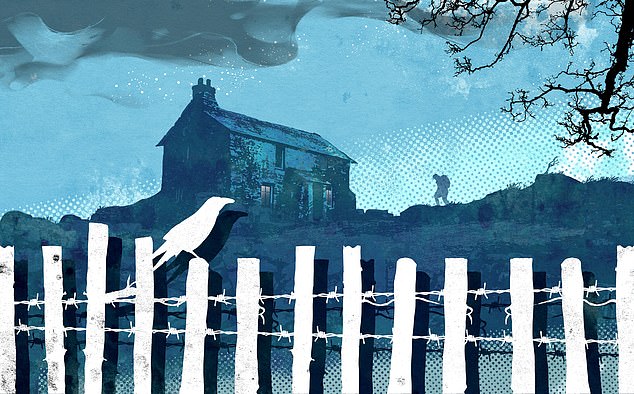 By Geoffrey Wansell for the Daily Mail

Inspired by Stephen King’s classic horror story Misery, this translates the action from a snowy North America to the wilds of Bodmin Moor in Cornwall, and replaces romantic novelist Paul Sheldon with Royal Marine Connor, who has recently separated from his wife.

He has embarked on a Special Forces training exercise on the Moor, which involves him being hunted down by a team of paratroopers intent on his capture.

Cold and wet, he is hiding out in a bothy when he encounters Eilidh, who apparently lives alone in an isolated farmhouse hidden in the deep folds of the landscape.

She offers him food and the warmth of a bed, and seems to be the perfect hostess until she reveals as dark a side as the unforgettable ‘number one fan’ Annie Wilkes did in Misery. Can Connor escape Eilidh’s clutches?

The plot twists and turns with spectacular speed — ripping along at terrific pace.

Inspired by Stephen King’s classic horror story Misery, this translates the action from a snowy North America to the wilds of Bodmin Moor in Cornwall, and replaces romantic novelist Paul Sheldon with Royal Marine Connor, who has recently separated from his wife

Without question, this is Turow’s finest novel since his breathtaking debut Presumed Innocent in 1987.

The compelling lead character is Clarice ‘Pinky’ Granum, who has appeared before, but here she dominates the story from the start.

She is working as an investigator for defence attorney Rik Dudek, who is about to defend his old friend Lucia Gomez, the female chief of police in Kindle County in the Midwestern U.S.

Gomez is accused of soliciting sex from three of her male officers in exchange for their promotion, which she categorically denies. Dudek and Pinky have the task of unravelling what they believe is a tissue of lies designed to force her out of office. Gradually a conspiracy among officers and former officers begins to surface, though not before Gomez is revealed as a woman with her own desires.

The granddaughter of the investigator in Presumed Innocent, Pinky is covered in tattoos and has a nail through her nose, but her humanity and resilience illuminate a striking story.

This reworking of the James Bond saga starts from the premise that 007 has gone missing and now his colleagues are determined to find out what has happened to him. Enter Johanna Harwood as 003, Joseph Dryden as 004 and Sid Bashir as 009, all of whom are controlled by the ever-present M and Miss Moneypenny. So far, so Bond.

There is even a sinister villain in the shadow of Dr No, represented by tech billionaire Sir Bertram Paradise, who has a scheme to reverse climate change and save the planet.

The three double-Os have to uncover what his real aims are — and perhaps locate 007 into the bargain.

Written with verve and calling in the familiar Ian Fleming descriptions of cars and food, it captures the Bond spirit magnificently and never loses its grip.