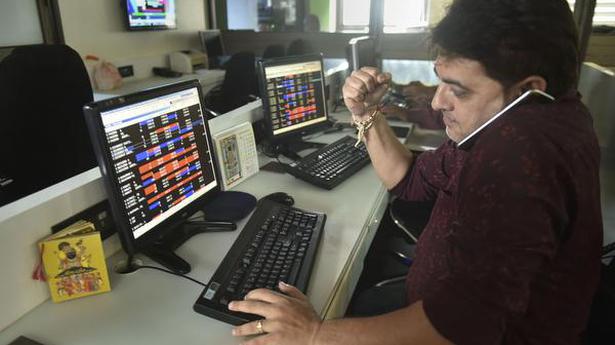 The benchmark stock indices have opened the day with strong gains.

RIL continues to acquire companies cashing in on the economic disruption brought about by the pandemic.

Join us as we follow the top business news through the day.

The fall in gold is just a correction, not a crash

It was a day of choppy trading for stocks today.

On the other hand, Bajaj Auto, ONGC, Nestle India, HUL and Kotak Bank were among the laggards.

According to traders, domestic bourses followed positive cues from global markets after US equities hit record highs in overnight session.

Bourses in Tokyo and Seoul ended on a positive note, while Shanghai and Hong Kong were in the red.

Stock exchanges in Europe were trading with steady gains in early deals.

Investors are also awaiting cues from the minutes of US Federal Reserve’s meeting.

In the forex market, the rupee settled 6 paise lower at 74.82 against the US dollar.”

A relief for the messaging app owned by Facebook.

Reuters reports: “India’s antitrust watchdog has dismissed a case against Facebook’s WhatsApp, saying the company has not abused its dominant position to expand in the country’s digital payments market, according to an official order.

A case in March alleged that WhatsApp was bundling its digital payment facility – WhatsApp Pay – within its messaging app for which it already has a large user base. The case alleged WhatsApp was abusing its position by forcing its payments feature on to its existing users.

In a 41-page official order made public late on Tuesday, the Competition Commission of India (CCI) said it did not find any contravention of antitrust laws, adding the company’s “actual conduct is yet to manifest in the market” as it has not fully launched the service yet.

“As stated by WhatsApp, the number of users being served under the beta version is limited to less than 1% of its users in India,” said the order.

The order will come as a relief for WhatsApp, which is seen close to a full launch of its payments service in its biggest market by users but one where it has for months struggled to get required clearances. The Supreme Court is separately hearing cases challenging the expansion of its payment service.

WhatsApp did not respond to a request for comment.

In its defence, the company had told the CCI its users are not required to register for or use WhatsApp’s payment feature in order to use the messaging service, the order said.”

India can get back to 7% growth: IMF India Mission Chief

While healthcare professionals and scientists scramble to cope with the human toll of the ongoing COVID-19 pandemic, policymakers worldwide and in India are racing to stabilise their economies, and mitigate the damage that has already been inflicted upon livelihoods, especially of poorer sections. Ranil Salgado, India Mission Chief at the International Monetary Fund (IMF), discussed the big questions on macroeconomic policy, growth dynamics and poverty alleviation, and challenges for India with Narayan Lakshman. Edited transcript:

The IMF’s June 2020 World Economic Outlook update projected global growth at 4.9% in 2020, nearly 2 percentage points below the April 2020 forecast. Please characterise the steepness of the fall in growth in India due to the COVID-19 pandemic, across sectors and the impact on jobs and future growth.

Globally, this is the impact of COVID-19, the lockdowns and the follow-on effects, including a supply-side hit but also [an impact on] consumers and corporations that could not work. As a result, spending falls. You had a similar feature replicating in India. India started with a relatively pre-emptive lockdown since March 24, 2020. There were only 550 confirmed cases across India at that time. India implemented a very strict lockdown, probably one of the strictest lockdowns. We had already revised down India’s growth in April 2020, not as much as globally because we thought the pre-emptive lockdown would achieve better results than [what we] ended up [with].

Rupee settles 6 paise lower at 74.82 against US dollar

Choppy tradin in stocks since open didn’t help the rupee.

PTI reports: “The rupee pared its initial gains and settled 6 paise lower at 74.82 against the US dollar on Wednesday, even as the domestic equity market traded in the positive territory.

During the session, the local unit witnessed an intra-day high of 74.67 and a low of 74.93 against the greenback.

Meanwhile, the dollar index, which gauges the greenback’s strength against a basket of six currencies, fell 0.04 per cent to 92.23.

Foreign institutional investors were net buyers in the capital market as they purchased shares worth Rs 1,134.57 crore on Tuesday, according to provisional exchange data.

Norgard has earlier invested in startups like SpaceX, Lyft, and NotionHQ, according to a Chingari statement. Grinda has more than 200 investments in several big firms including Alibaba Group, Airbnb, Beepi, FanDuel, Palantir, and Windeln, it said.

Co-founder and CEO of Chingari App, Sumit Ghosh said, “We are humbled that globally acclaimed entrepreneurs like Brian Norgard and Fabrice Grinda loved the vision of the Chingari team and invested into what we are building…We are absolutely delighted to have them onboard the Chingari rocket ship and look forward to learning from them the art of building and scaling Global product companies,” he said.

Even as economies unlock, demand concerns persist in the oil market.

Reuters reports: “Oil prices eased on Wednesday on concerns that U.S. fuel demand may not recover as quickly as expected amid stalled talks on an economic stimulus package, overshadowing a bigger-than-expected drawdown in U.S. crude stocks.

With investors keeping an eye on a key producer countries’ ministerial meeting later in the day, Brent crude futures fell 40 cents, or 0.9%, to $45.06 a barrel by 0701 GMT, having edged up 9 cents on Tuesday.

“But losses were limited by positive news such as a drop in U.S. crude stocks,” Kikukawa said, predicting prices will stay within a tight range amid the mixed signals.

“It’s challenging to make heads or tails out of the oil market these days,” he said in a note. “The market is struggling to make new highs as demand concerns remain tethered to the hip of the coronavirus worries as OPEC returns more barrels to market this month.”

Investors are awaiting news from Wednesday’s meeting of a ministerial panel of the Organization of the Petroleum Exporting Countries (OPEC) and allies including Russia, a grouping known as OPEC+, which is set to review adherence to a previously agreed deal on oil output cuts.

Compliance with the cuts stood at 95%-97% in July, according to OPEC+ sources and a draft report reviewed by Reuters on Monday.

Russian Energy Minister Alexander Novak is set to join the video meeting despite having tested positive for the novel coronavirus.

OPEC+ eased their cuts in August to 7.7 million barrels per day (bpd) from 9.7 million bpd previously.”

Flipkart partners with IIT-Patna for joint research in artificial intelligence

Flipkart has partnered with IIT-Patna to help create industry-focused applied research in the areas of artificial intelligence (AI), natural language processing (NLP) and machine learning (ML), the company said in a press release.

Flipkart expects to foster an environment of collaboration in the areas of automation, AI, NLP and ML and help build critical national capabilities, the statement said. As part of the pact, IIT-Patna will undertake a number of programmes such as joint research activities, writing research papers, organising seminars and internship/mentorship opportunities, it added.

The aim behind this collaboration is to create industry-focused applied research that could help reach e-commerce more consumers and sellers, said Mayur Datar, chief data scientist at Flipkart.

PTI reports: “Shares of packaging materials and solution company Uflex Ltd on Wednesday jumped over 9 per cent after the company reported more than two-fold jump in its consolidated net profit for the first quarter ended June 2020.

Uflex Ltd on Tuesday reported over two-fold jump in its consolidated net profit at Rs 196.54 crore for the first quarter ended June 2020, helped by volume growth.

The company had posted a net profit of Rs 90.91 crore during April-June quarter a year ago, Uflex said in a regulatory filing.

Its total income rose marginally by 0.78 per cent to Rs 1,997.54 crore during the quarter under review, as against Rs 1,981.97 crore in the corresponding period of previous fiscal.

“Due to the pandemic, consumption trends have witnessed a shift and flexible packaging has gained much more importance especially because of the hazards attached to non-packaged products. This resulted in higher production and sales volume,” Uflex said in a statement.”

India in talks with 13 countries to resume flights

India is in talks with 13 countries to resume scheduled flight operations, Minister of State for Civil Aviation Hardeep Puri said on Tuesday.

So far, India has entered into bilateral agreements with seven countries to commence flights on a limited basis. These include the U.S., UK, France, Germany, UAE, Qatar and Maldives. These agreements allow airlines of the bilateral partners to provide air connectivity between the two countries.

Good Morning from #Germany where Chancellor Merkel rules out any further loosening of virus measures as Europe’s largest econ recorded biggest increase in coronavirus cases in nearly 4mths on Tue. ‘We are in the midst of the pandemic,’ chancellor says. https://t.co/Kf6ljWnWxT pic.twitter.com/9XNAXZEpw6

Rupee rises 7 paise to 74.69 against US dollar in early trade

The positive sentiment in stocks is helping the rupee this morning.

PTI reports: “The rupee appreciated 7 paise to 74.69 against the US dollar in opening trade on Wednesday supported by positive domestic equities and sustained foreign fund inflows.

It had settled at 74.76 against the US dollar on Tuesday.

“Asian currencies have started with gains against the US dollar this morning and could lend support,” Reliance Securities said in a research note adding that “RBI could be present in the markets to curb volatility“.

Meanwhile, the dollar index, which gauges the greenback’s strength against a basket of six currencies, rose 0.08 per cent to 92.34.

Forex traders further said that markets will look ahead to the US Federal Reserve minutes scheduled to release tonight.

Foreign institutional investors were net buyers in the capital market as they purchased shares worth Rs 1,134.57 crore on Tuesday, according to provisional exchange data.

Incorporated in 2015, Vitalic and its subsidiaries are in the business of pharma distribution, sales, and business support services. Its subsidiary also runs an online pharmacy platform Netmeds to connect customers to pharmacists and enable door step delivery of medicines, nutritional health and wellness products.

Another morning marked by bullish opening gains for stocks.

On the other hand, HCL Tech, Nestle India, Tata Steel, Kotak Bank and Infosys were among the laggards.

According to traders, domestic bourses followed positive cues from US equities which hit fresh records in overnight session, they said.

Stock exchanges on Wall Street ended with gains in overnight session as US government stimulus packages to aid the economy began showing signs of growth.

Bourses in Tokyo and Seoul were trading on a positive note, while Shanghai was in the red.

Investors are also awaiting cues from the minutes of US Federal Reserve’s meeting, scheduled to be released later in the day.

How many times should you have kadha in a day? ...

LG Wing smartphone with two displays launched in India at a...