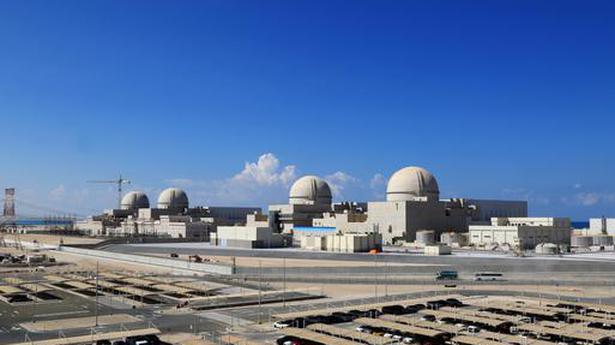 The milestone follows the successful start-up of the plant’s first reactor at the end of last month and launches the UAE on the road to meeting 25% of its electricity needs from nuclear power.

The oil-rich United Arab Emirates announced on Wednesday that it has connected its Barakah nuclear power plant to the national grid in a first for the Arab world.

The milestone follows the successful start-up of the plant’s first reactor at the end of last month and launches the UAE on the road to meeting 25% of its electricity needs from nuclear power.

“The safe and successful connection of Unit 1 to the UAE grid marks the key moment when we begin to deliver on our mission to power the growth of the nation by supplying clean electricity, around the clock,” said Emirates Nuclear Energy Corporation CEO Mohamed Ibrahim al-Hammadi.

“We are confident in our people and our technology to continue to progress to reach… the completion of the remaining three units, with the goal to power up to 25% of the UAE’s electricity needs for at least the next 60 years.”

The plant on the Gulf coast west of Abu Dhabi had been due to go online in late 2017 but faced delays that officials attributed to safety and regulatory requirements.

The UAE has substantial oil and gas reserves, but with a power-hungry population of 10 million, it has made huge investments in developing clean alternatives, including solar energy.

Saudi Arabia, the world’s top oil exporter, has said it plans to build up to 16 nuclear reactors, but the project has yet to materialise.

Barakah was built by a consortium led by the Korea Electric Power Corporation at a cost of some $24.4 billion.

Angela Merkel warns Germans that ‘difficult months are ahead of us’

Lindsay Lohan sued by publisher HarperCollins, here’s why – Times of...