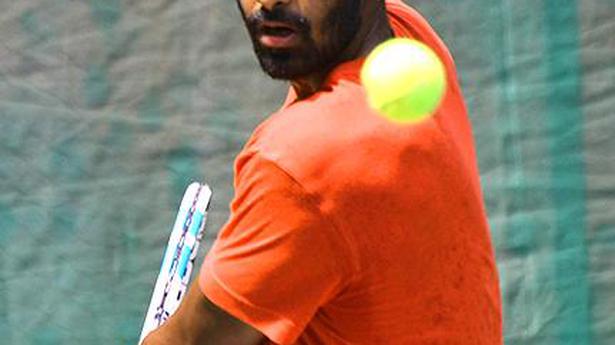 World No. 132 could make US Open main draw if there are three pull-outs

Prajnesh Gunneswaran, India’s No. 2 singles player, will travel to New York, hoping lady luck smiles on him as he bids to get into the main draw of the US Open.

The World No. 132 is third on the alternate list and should there be as many pulls-outs, he will join compatriot Sumit Nagal in the main draw of the Major, which begins on August 31.

“Yes, I will be travelling to New York and see if I can get in. I had planned to go back to my base in Germany either way and since it is the Grand Slam, I want to give myself the best chance of getting in,” said Prajnesh.

If he does get in, it will be a sixth straight appearance in the main draw of a Grand Slam, something not achieved by an Indian singles player in the last decade. Somdev Devvarman played in five consecutive Majors from the 2010 US Open to the 2011 US Open.

When asked about it, Prajnesh said, “Well it would be nice, but I would like to focus more on winning my first-round matches. I am focused on my preparations and the things I need to do, and feel if I can put everything together, it will happen eventually.”

Elite sportspersons across the world have found it challenging to train over the last few months, given the lockdown restrictions. Prajnesh has been able to train properly only for the last month and a half here in the city.

“Yes it is far from ideal, but I have been able to train since the second week of July,” he said. “It helps that I have had good hitting partners like Sasi Kumar Mukund and Ramkumar [Ramanathan] to stay sharp. Being in Chennai, you always have good players around.”

Sensex vaults over 360 points in opening trade on wide-spread buying...

From never arguing to not having fun together, signs of an...