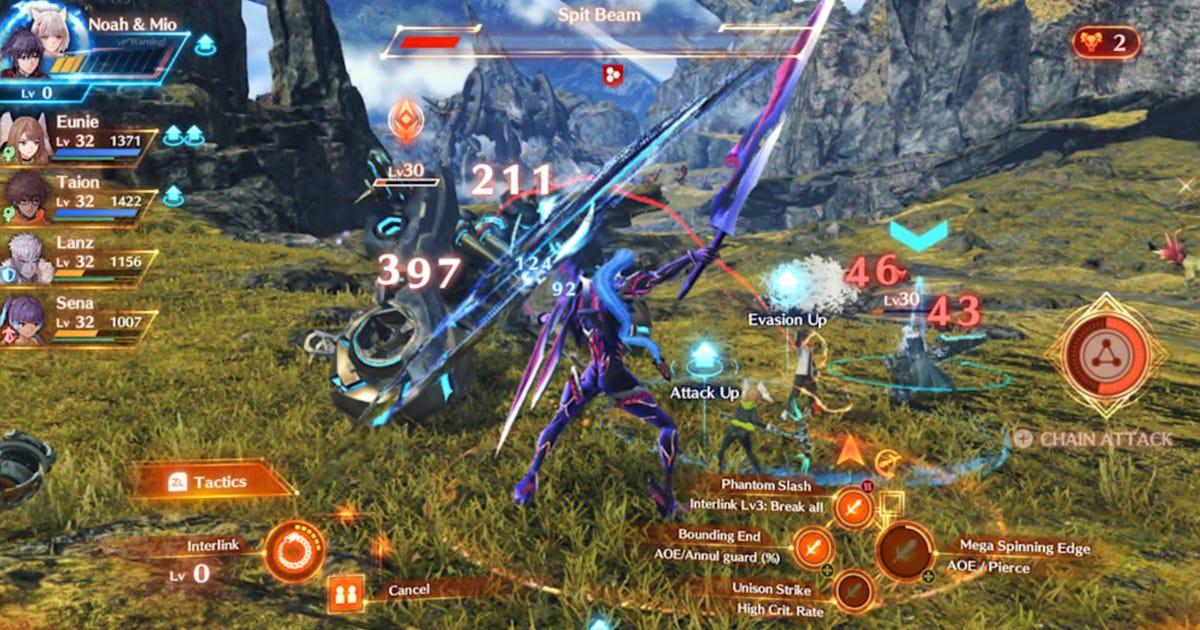 Like previous games in the series, the new Nintendo Switch RPG Xenoblade Chronicles 3 boasts a deep battle system with many moving parts to consider. While the in-game tutorials do a good job gradually acclimating you to the basics, parsing out helpful lessons over the course of the game’s first few hours, there are still many nuances that aren’t explained quite as thoroughly.

If you’re struggling to wrap your head around combat, here’s a guide to help you master Xenoblade Chronicles 3’s battle system.

As in previous Xenoblade games, battles play out in real time in Xenoblade Chronicles 3.

While engaged in combat, you can maneuver your character around the battlefield freely. Your character will also automatically unleash basic attacks when near the foe. These are good for softening up the enemy until your Arts (detailed below) are ready to use.

In addition to the basic auto-attacks, each character has a suite of special moves known as Arts. These are assigned to different face buttons on the controller, and run the gamut from damaging attacks to healing and debuff moves.

There are two types of Arts in Xenoblade Chronicles 3. Standard Arts will gradually charge up as you’re engaged in battle. Once an Art is fully charged, press its corresponding button to unleash it. The move will then undergo a cooldown period, rendering it unusable for a set amount of time until it recharges.

Depending on which character you’re controlling, standard Arts will charge up slightly differently. Kevesi characters’ (Noah, Lanz and Eunie) Arts will gradually charge on their own; Agnian characters (Mio, Taion and Sena) will instead charge their Arts as they land auto attacks.

Execute your Arts well and you’ll also fill up the gauge for your Talent Arts. These are class-specific special moves that are assigned to the A button, and they deal even more damage or have some other special properties. For instance, Noah’s Talent Art, Overclock Buster, will inflict extra damage when used on an enemy that is Dazed.

Since Talent Arts take much longer to charge up than standard Arts, it’s imperative to wait until the most opportune moment to use them.

There are two main benefits to canceling attacks. First, you’ll transition into the Art you just selected much more smoothly, letting you deal damage more quickly. Second, successfully canceling attacks will help build up your Chain Attack gauge – more on that below.

Combos are another vital battle strategy in Xenoblade Chronicles 3, and they work much like they did in previous games.

Many Arts in the game can inflict a status condition on the enemy. Noah’s Sword Strike Art, for example, will inflict Break on a foe when they’re hit from the side, staggering them and leaving them susceptible to moves that inflict Topple. You’ll create combos by successfully inflicting these status conditions in the correct order.

Two simple but effective combos are as follows:

Although Xenoblade Chronicles 3 lets you swap between characters during battle, you’ll generally want to focus on controlling one at a time. This means you’ll often need to rely on your AI teammates to continue the combo chain you started. Fortunately, your companions are fairly smart and will usually use the right Arts when needed.

Early on in the adventure, you’ll unlock the ability to use Chain Attacks. Perform well in battle by creating combos and canceling attacks, and you’ll gradually fill up your Chain Attack gauge.

Once a Chain Attack has been initiated, you’ll team up with your companions and unleash a series of sequential attacks with each character. As you perform these attacks, you’ll accumulate Tactical Points, or TP, which will trigger a powerful Chain Art move if you manage to exceed 100% TP.

Another new battle mechanic in Xenoblade Chronicles 3 is Interlink. Partway through the adventure, you’ll gain the ability to fuse two characters together into a powerful combined form called an Ouroboros.

While an Ouroboros, your characters will dish out more damage than they could individually. However, this transformation is only temporary; after prolonged use, your Ouroboros will eventually overheat, and the two characters will separate. As such, you’ll want to save Interlinking as a way to clinch the battle.

Xenoblade Chronicles 3 will be receiving several waves of DLC over the next few months as part of its Expansion Pass. The first wave launched alongside the game and offers special costumes for each character, along with a variety of helpful bonus items. Future waves will add new quests, hero characters, and story content.